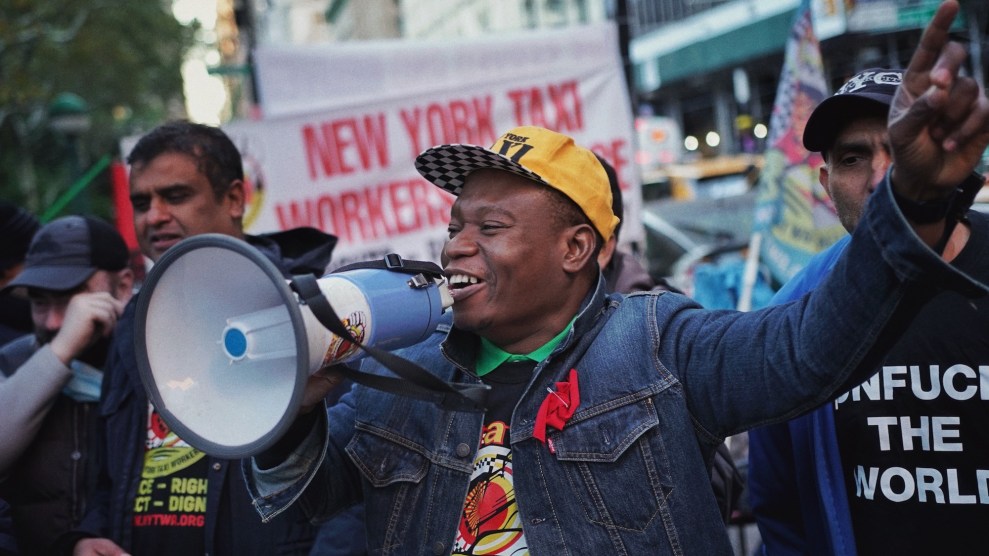 Mouhamadou Aliyu celebrates a deal that reduces the debt on his New York City taxi medallion from $651,000 to a maximum of $170,000.Mark Helenowski/Mother Jones

Two weeks ago, New York City taxi drivers and their supporters launched a hunger strike. Their goal was to pressure Mayor Bill de Blasio and the city to guarantee the loans they took out to purchase medallions required to operate Yellow cabs.

On Wednesday, they achieved a near total victory.

In a course reversal, de Blasio has agreed to have the city serve as a backstop for the debt past administrations loaded onto drivers. That will allow the cabbies, many of whom still owe more than $500,000, to reduce their debts to $170,000 at most. Their loan payments will also be capped at about $1,100 per month. So far, the agreement covers drivers who owe money to Marblegate, which became the largest holder of medallion loans after the bubble burst.

Our taxi workers are the backbone of our city and we refuse to leave them behind. I’m proud to have worked with the @NYTWA, @SenSchumer and Marblegate to come to this agreement.

To our drivers: congratulations on a well-earned victory. https://t.co/07DckFv9e2

As I wrote last month at the start of the strike:

A Pulitzer Prize–winning New York Times investigation established in 2019 [that] lenders, medallion brokers, and city officials spent years taking advantage of a scheme to inflate the prices of the taxi medallions that let New York City drivers operate cabs. The victims were the mostly immigrant cab drivers now left with hundreds of thousands of dollars of debt. There have been three suicides by owner-drivers in recent years.

In September, de Blasio tried to make up for city officials’ predatory behavior by unveiling a debt relief plan. Members of the New York Taxi Workers Alliance—the 21,000-person organization that led the hunger strike—deemed the proposal, which could still have left many drivers hundreds of thousands of dollars in debt, woefully inadequate. They proposed a new plan that capped driver debt at $175,000 by having the city guarantee their loans.

After a month of protests outside City Hall failed to get a response from de Blasio, drivers, local elected officials, and other supporters, launched a hunger strike on October 20. A few minutes after he stopped eating, Richard Chow—a 63-year-old driver whose brother Kenny had died by suicide in 2018 after buying a medallion for more than $700,000—told me he wasn’t sure how long he would last. “This is our last moment to fight,” he said. “I’m risking my life so that Mr. de Blasio can save the lives of thousands of medallion owner and families.”

During visits to the protest site, I watched his condition deteriorate as he relied on coconut water and Gatorade for energy. By Monday, Chow, who still owed about $400,000 on his medallion, was using a wheelchair. Two days later, after Rep. Alexandria Ocasio-Cortez called in from Washington, DC, to congratulate the hunger strikers, he ate a plain avocado. It was his first solid food in more than two weeks.