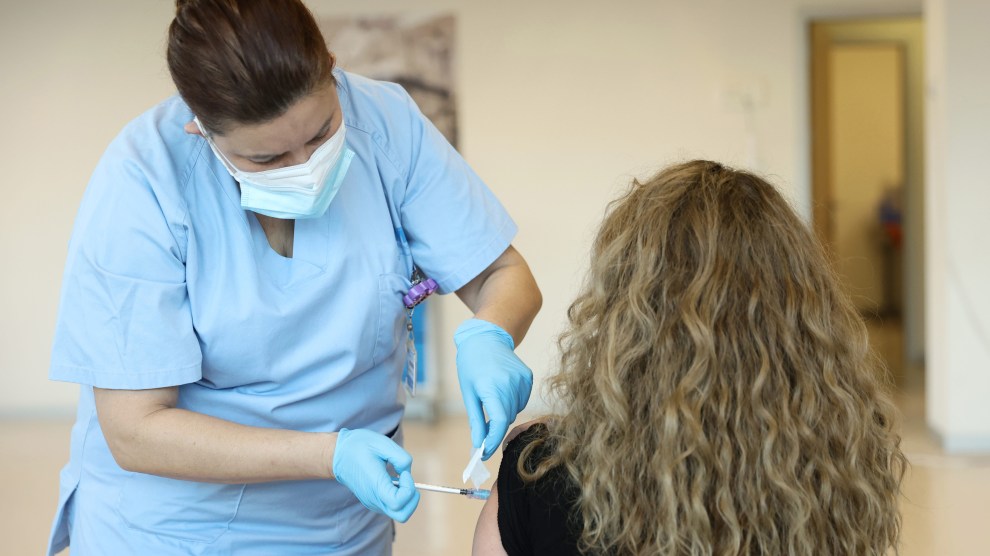 We know that there’s no better way to prevent severe illness and death from the rapidly spreading Omicron variant than getting boosted. Receiving a booster after being fully vaccinated for five months, according to one study, reduced mortality by 90 percent.

Yet booster shot outreach efforts are facing a big problem: We don’t know exactly who is getting boosted. The data is, frankly, a mess. And that stops public health workers on the state and local level from taking the actions they need to combat the coronavirus.

One of the most glaring issues is that the Centers for Disease Control and Prevention doesn’t publicly report racial and ethnic information on booster shot recipients under age 65, even though it does so for people fully vaccinated people and those who have received at least one dose. No word yet from the CDC on why that is. But for a disease that has killed and infected Black, Indigenous, and Latino people at higher rates than Asian and white people, this lack of granular data is particularly glaring.

Good data allows states to use targeted outreach to address disparities in vaccine access. Take, for example, Michigan, which collects detailed demographic data on vaccine uptake. It then uses that information to close the gap between Black and white vaccine access by placing testing and vaccination sites in vulnerable communities and engaging trusted messengers, like faith leaders, to spread the word about the benefits of vaccines. “We’ve really been able to look at who are trusted community leaders and how can they message to populations where we’re seeing lower vaccine uptake,” Alexis D. Travis, from the Michigan Department of Health and Human Services, explained.

Eleven other states are recording racial and ethnic data for booster recipients under age 65, but their racial categories aren’t standardized—Mississippi, for example, has a distinct category for Pacific Islanders, while Michigan groups Pacific Islanders in with Asians and Native Hawaiians. “That makes it challenging to compare the data across states,” Samantha Artiga, director of the Racial Equity and Health Policy Program at the Kaiser Family Foundation, said, “in addition to only having a limited universe of states reporting the data.”

The lack of data isn’t a new problem: Even for initial doses of the vaccine, the CDC has not linked ethnic data to age, as my colleague Edwin Rios has reported, making it difficult to single out specific groups like Black kids or Latino adults. But the addition of a third (or, for Johnson & Johnson recipients, second) shot to the vaccine regime has further muddied already murky water. Someone who became fully vaccinated last week wouldn’t be eligible for a booster, so while states can estimate the amount of fully vaccinated people who have been boosted, it’s harder for them to asses booster uptake among fully vaccinated people who are eligible for additional doses.

Without this sort of data, the job of outreach becomes increasingly difficult, and measuring success becomes a guessing game. Worse, sometimes the data we do collect gets it wrong.

The CDC has been grappling with its own booster-related data issues. In some cases, the agency has accidentally recorded people’s booster shots as initial doses and consequently skewed estimates of initial doses higher. “We currently are still seeing a lot of gaps and limitations in the data that prevents us from being able to assess whether there is equity in receipt of the booster doses and also in vaccination uptake among children,” Artiga said. In other words, we can barely get accurate numbers on booster doses for different age groups, which we’re trying to collect nationally, let alone ethnicities, which we are not.

So, what do we know?

Booster uptake among white people age 65 and older at the national level is generally similar to prior vaccine uptake, according to a December analysis by KFF. The shares of Black and Hispanic booster dose recipients age 65 and older are smaller than their shares of fully vaccinated people, but there has been an uptick in recent weeks.

Michigan, for its part, is still seeing disparities in booster uptake, but they’re “not unexpected,” Travis said. Statewide, 46.2 percent of fully vaccinated people have gotten a booster, Joe Coyle, director of the state’s Bureau of Infectious Disease Prevention, said. Among non-Hispanic Blacks, it’s 35.5 percent, and for Hispanics, it’s 33.2 percent.

But all ethnicities see increasing booster uptake with age. “They had a little bit longer to get vaccinated,” Travis said, “but they also understand they’re one of the highest risk groups for complications and deaths related to Covid-19. And what we’ve seen is that risk perception doesn’t necessarily translate to the younger age groups.”

That’s handy information at the state level. But for the nation as a whole, “given the limitations in the data, it’s really difficult to draw any strong conclusions about whether there are any disparities in take up a booster doses so far,” Artiga said.