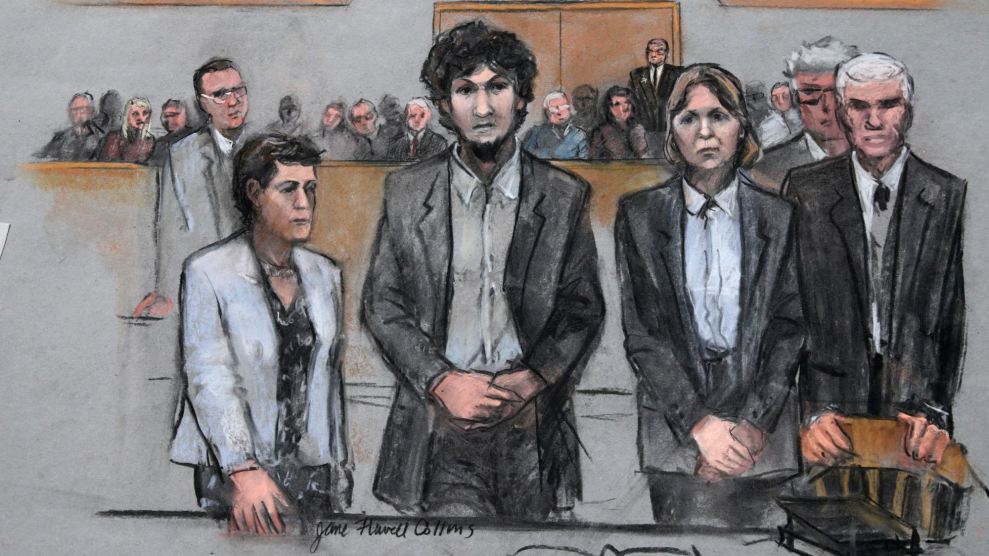 In this May 15, 2015 courtroom sketch, Boston Marathon bomber Dzhokhar Tsarnaev, center, stands with his defense attorneys at the Moakley Federal court house in the penalty phase of his trial in Boston.Jane Flavell Collins/AP

In a 6-3 party-line ruling, the Supreme Court today restored the death sentence of Dzhokhar Tsarnaev, the notorious terrorist who planned and carried out the 2013 bombings at the Boston Marathon with his brother Tamerlan.

In one of the worst acts of domestic terrorism since 9/11, the Tsarnaev brothers placed two pressure cooker bombs near the marathon finish line, which detonated, killing three people and injuring 260 more. In the days following, the brothers murdered an MIT police officer and engaged in a firefight with law enforcement in Watertown, Massachusetts, during which Tamerlan Tsarnaev sustained injuries that led to his death. Dzhokhar Tsarnaev was later apprehended during a massive manhunt that effectively shut down the greater Boston area.

Tsarnaev received the death penalty in 2015. Five years later, the U.S. Court of Appeals for the First Circuit upheld his conviction but ruled that he should not have been sentenced to death, citing concerns that the trial judge had not taken adequate steps to ensure that jurors had not been swayed by pretrial coverage of the case. In addition, the appeals court ruled that the trial judge should not have excluded evidence linking Tamerlan Tsarnaev to a triple murder that took place before the bombings, saying that it could have helped shore up Dzhokhar Tsarnaev’s argument that his brother had dominated him into carrying out the attack. This ruling was in turn appealed to the Supreme Court.

In a strange twist, the Supreme Court’s conservative members today sided with the Biden Department of Justice. The department argued for the restoration of Tsarnaev’s original death sentence, over the objections of the court’s liberal justices, and despite assurances from the president about a change in policy on executions.

Joe Biden, who personally opposes capital punishment, had previously vowed to “eliminate the death penalty at the federal level, and incentivize states to follow the federal government’s example.” In addition, the Justice Department’s decision to take up the case from Trump lawyers seems to contradict a moratorium on death penalty cases that the department announced last year.

Justice Amy Coney Barrett also seemed to change her stated opposition to the death penalty by filing a concurrence supporting Tsarnaev’s execution. When Barrett was a law clerk, she coauthored an article published in the Marquette Law Review arguing that orthodox Catholic judges (such as herself) should recuse themselves from death penalty cases rather than put themselves in the position of potentially having to violate the teachings of their church. As a justice, Barrett has previously voted to allow federal executions to proceed, but her vote today was additionally striking because it helped reinstate a death sentence that had previously been overturned.