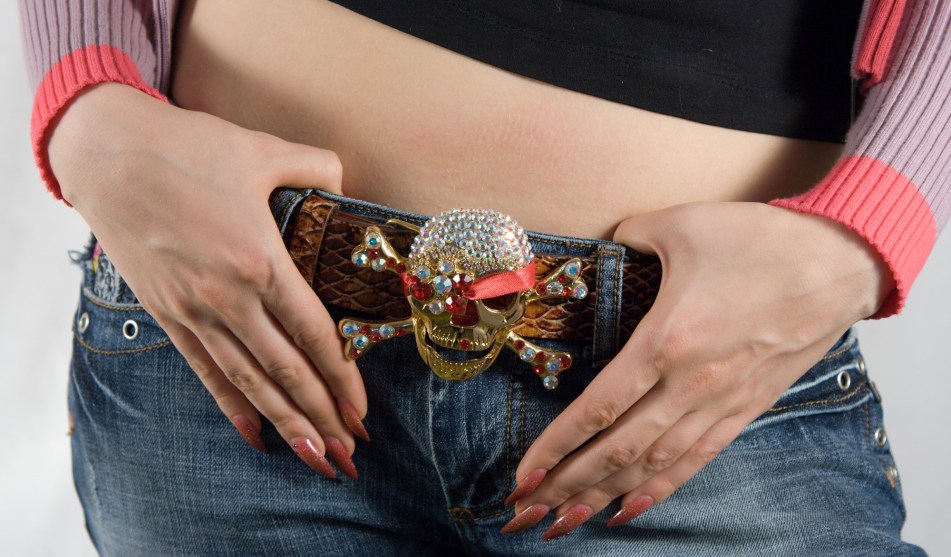 If I were a naive 22-year-old in the early aughts, looking at pictures of Paris Hilton wearing pants with a two-inch inseam I would think, “That’s hot.” For those who are around that age now, who were infants at the time and eager to replicate the iconic look that appears to be making a significant comeback, a few words of warning: You don’t know the misery of those trousers. Your upper derriere, exposed to the cold winds of a middle-school math class, just waiting to be poked from behind by Tyler with a pencil. Wilton could not make a pan that created a muffin top more perfect than the one enforced by a low-rise jean. And then there are the physical demands. I believe that my repetitive musculoskeletal injuries are from tugging my shirt down to meet that low-rise all day long. (Now that I think of it,  if you were a teenager back then, you may deserve some type of hardship compensation.)

And now, despite all the obvious discomfort, once more the low-rise trend seems to be returning. It’s happened before as a 2018 article in The Cut warned, describing them as “the masochistic trouser of choice.” Fast forward to earlier this month, Refinery29 reported that second-hand retailer thredUP tracked a 50% increase in searches for low-rise jeans at the beginning of 2021. Now the runways are making that official. From the comfort of my home in February—Black History Month and Fashion Month—I scrolled TikTok and the runway looks made it clear: model after model came by with pants slung across the hips and a cute little crop on top.

Early Y2K is back.

Usually every twenty years, a trend gets recycled so we are overdue for a return to the early aughts. The nostalgia urge has been exacerbated by the pandemic, the invasion of Ukraine, not to mention the crisis of democracy at home and abroad—all conspiring to make this time feel so turbulent.

Researchers say nostalgia is a dynamic that demonstrates people are looking for peace and refuge. Gen Z has been hit the hardest by all these forces, just as their lives were supposed to take off, the pandemic shut them down. Their already media-heavy lives were forced into being almost completely virtual as they finished school and started jobs online during the pandemic. “While we love the internet, the pandemic’s grave effect on in-person interaction has made the digital world basically all we have,” Michael Pandowski of Gen Z marketing firm Crimson Connection told Insider. “So we feel nostalgic for a time before the internet had become so omnipresent.“

But nostalgia for some can be a trigger for many, especially hip-huggers for us Millennial gals. These pants are not just another pair of jeans, but signifiers of the fraught messages of sexuality and body image that were so pervasive at the time. The pant was hypersexualized and threatened to “reveal-all” while at the same time, defying and embodying the cult of purity culture. Remember, this was the time of the Bush administration pushing abstinence-only sex education.

Journalist and digital expert Gabrielle Korn put it much better than I ever could in InStyle, “These mixed messages of chasteness and performative sexiness set the stage for low-rise jeans,” she writes, “they weren’t just trendy, they were ubiquitous.” She recalls that the boys in her class—and in mine, and probably in the classes of most other girls who were in middle and high school at the time—would try to throw pennies down the pants. The pants seem to represent a time when there was an invitation for boys (and men) to do anything they wanted to with girls (and women) with no consequences. (Remember Justin Timberlake at the Superbowl?)

These pants were popular before the body positivity movement went mainstream, when Supersize Me scolded everyone about their eating habits, and when the nightly news showed B-roll of fat people walking down the streets in an effort to drum up fear over the “Obesity Epidemic”—not to mention some cheap and degrading laughs. And well, these pants were holding onto nothing if you were blessed with even modest amounts of flesh.

In some ways it makes perfect sense that low-rise jeans are yet again making a comeback; it might be a way of announcing someone is “done” with the extreme comfort of pandemic anti-fashion fashion. We are ready to discard our sweatpants, damnit, and maybe even vulnerable enough to show our more zaftig bodies. The waistlines on today’s runways are more inclusive of different proportions. Does this mean these jeans are for absolutely everyone, no matter what the BMI? Maybe. And maybe all the “Tylers from math class” have learned that the jeans are not an invitation for inappropriate contact. If that’s the case, maybe they aren’t so bad after all.