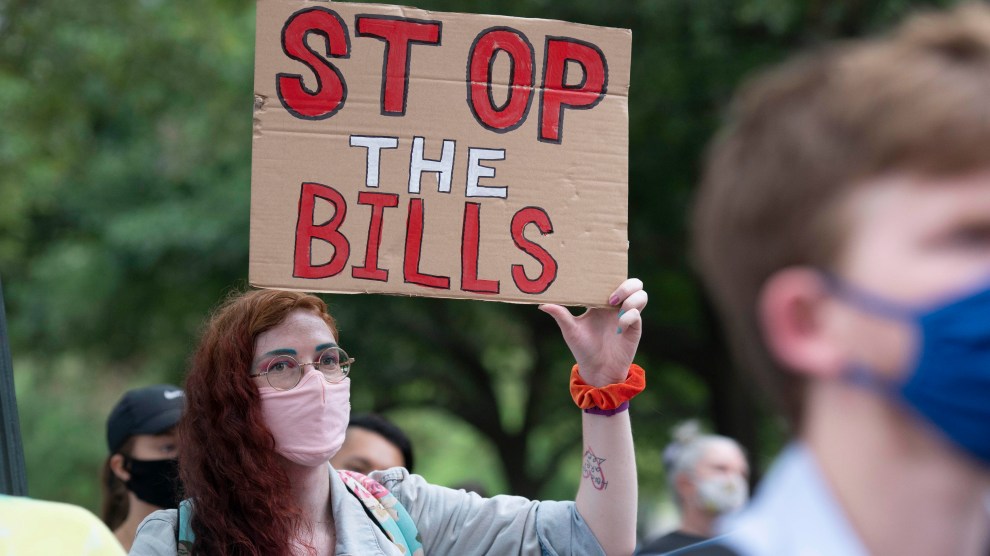 As the moral panic about trans youth spreads, a dozen states have passed laws, mostly driven by Republican legislators, which prevent trans students from participating on girls’ sports teams. But in some states, these bills are facing unexpected opponents: Republican governors.

Thus far, only one Republican governor has successfully thwarted his state’s efforts to bring state law into high school sports. But three Republicans have joined Democrats in Kentucky, Kansas, and Louisiana in taking a stand against laws that target nonexistent problems. Here are their reasons.

Last month, Holcomb took a pragmatic approach in vetoing a bill that would have banned trans girls from participating in girls’ sports, arguing that the vague language of the legislation would open schools up to lawsuits. He further added that at no point in the past 10 years had a trans girl sought to compete on a girls’ team in Indiana.

“The presumption of the policy laid out in HEA 1041 is that there is an existing problem in K-12 sports in Indiana that requires further state government intervention,” he wrote. “It implies that the goals of consistency and fairness in competitive female sports are not currently being met. After thorough review, I find no evidence to support either claim even if I support the overall goal.”

Because a veto override in Indiana requires only a simple majority in the state House and Senate, HEA 1041 might still become law.

The most compelling and compassionate rebuke of anti-trans athletics legislation came from Cox, who issued a five-page statement last month outlining the logistical and moral downsides of the state’s proposed anti-trans sports bill.

“I must admit, I am not an expert on transgenderism,” Cox wrote. “I struggle to understand so much of it and the science is conflicting. When in doubt however, I always try to err on the side of kindness, mercy, and compassion.”

He went on to state that among the 75,000 kids participating in high school sports in Utah, four are trans, and only one plays girls’ sports. He also noted the high rates of suicidality and attempted suicide among trans youth in general:

Four kids and only one of them playing girls sports. That’s what all of this is about. Four kids who aren’t dominating or winning trophies or taking scholarships. Four kids who are just trying to find some friends and feel like they are a part of something. Four kids trying to get through each day. Rarely has so much fear and anger been directed at so few. I don’t understand what they are going through or why they feel the way they do. But I want them to live. And all the research shows that even a little acceptance and connection can reduce suicidality significantly. For that reason, as much as any other, I have taken this action in the hope that we can continue to work together and find a better way.

In 2021, Burgum vetoed a bill that would ban trans participation in school sports, on the grounds that it was legislating a nonexistent problem.

“To date there has not been a single recorded incident of a transgender girl attempting to play on a North Dakota girls’ team,” Burgum wrote in a statement, adding that the state’s High School Activities Association already had regulations regarding when and how trans kids could compete in sex-separated sports. He concluded, “This bill would unnecessarily inject the state into a local issue by creating a ban with myriad unforeseen consequences.”

The state Senate then failed to garner the two-thirds majority needed to override the governor’s veto, and the bill was laid to rest.