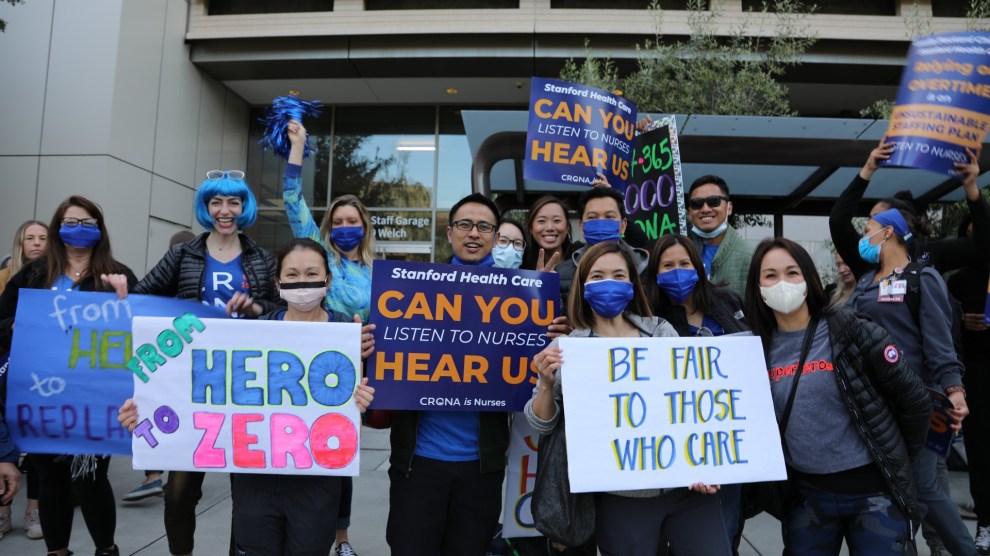 Photo courtesy of Committee for Recognition of Nursing Achievement

After a week-long strike, the union representing nearly 5,000 nurses at Stanford Health Care and the Lucile Packard Children’s Hospital has voted to approve a new, three-year contract with the hospitals. The nurses plan to return to work on Tuesday.

Both the hospitals and the nurses union, the Committee for the Recognition of Nursing Achievement, hailed the agreement as a success. “CRONA’s new contracts represent an enormous victory for nurses at Stanford and Packard, who have been fighting tirelessly for improved work and patient care conditions,” union president Colleen Borges, said in a statement. “We have won improvements across all the priorities nurses identified at the beginning of our contract campaign.” Eighty-three percent of the union voted in favor of the contract.

The nurses began striking on April 25 after weeks of negotiating with the hospitals. As my colleague Emily Hofstaedter wrote last month:

To avoid burnout and to continue to offer care during the chaos of the pandemic, the nurses say they need more staff, better mental health resources, better pay, and more paid time-off. More than ninety percent of the 5,000 nurses who belong to the Committee for Recognition of Nursing Achievement (CRONA) union at the two hospitals voted for the strike.

Late last month, just a day before the action started, I spoke with one of the nurses who voted to authorize the strike. She told me:

It’s very disappointing to be called health care heroes, and have all of this verbal praise lavished on us for the last two years, and then when it comes time to actually follow up those lovely sentiments with actions, it’s not there. And people are fed up with it. It’s time to put your money where your mouth is.

When I followed up with the nurse via text on Monday, she said she is “very pleased” with the contract and is excited to go back to caring for patients. “I think both sides made substantial compromises and as a result we got a contract that works for nurses and the hospital. Change happens incrementally and we gained significant improvements with this new contract.”

According to the union, the new contracts are a symbolic action as much as a tangible one, particularly in the wake of the pandemic. As union vice president Kathy Stormberg said in a statement, the agreements “acknowledge our immense value” as health care workers. “Hospitals across the country must step up their support for nurses, and we stand together with nurses nationwide to fight for a healthcare system that truly values nurses and our expertise.”

This piece has been updated to include a comment from a nurse.