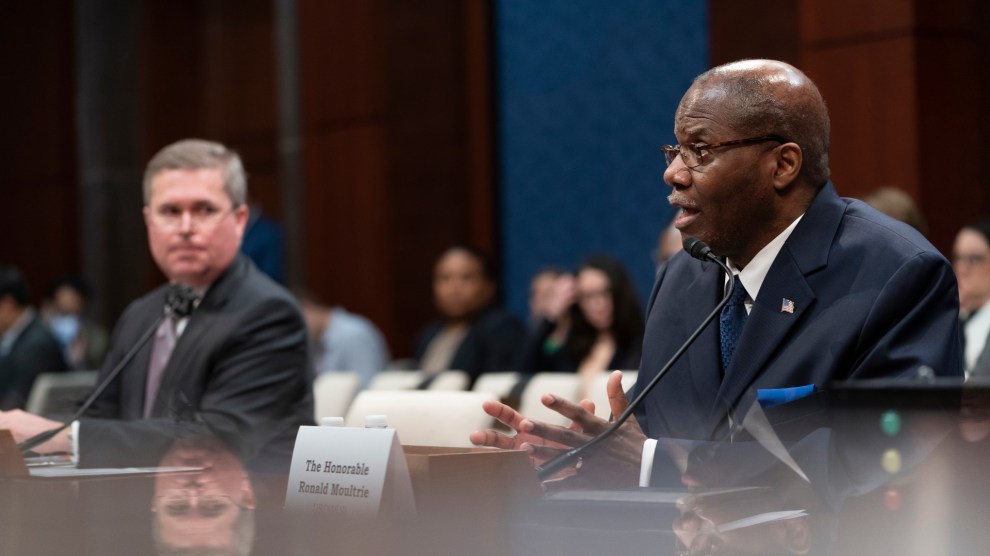 Under Secretary of Defense for Intelligence and Security Ronald Moultrie, right, and Deputy Director of Naval Intelligence Scott Bray, speak during a House committee hearing on "Unidentified Aerial Phenomena" on May 17.Alex Brandon/AP

This morning, Congress held its first hearing on unidentified flying objects in more than 50 years. For many, it was a highly anticipated event: US military officials were discussing UFOs (!) in Congress. But I tuned in, and I am sorry to report, their testimony did little to address the question of extraterrestrial life—and whether or not observations of weird objects in the sky are the work of aliens.

Still, we got some footage.

Officials provided two examples of videos of “unidentified aerial phenomena,” or UAP, investigated by the government. In one video taken by the US Navy, the camera captures what appears to be several glowing triangles “off the coast of the United States,” according to Deputy Director of Naval Intelligence Scott Bray. The video was taken through night-vision goggles. For several years, the observation remained unexplained. But after a similar sighting years later, he said, the objects in question were determined to be unmanned drones. The triangular shape was a result of the light passing through in the night-vision goggles, he said.

In the second video, the object remains unidentified. The footage, which was played repeatedly during Tuesday’s hearing, was taken from an aircraft “operating in a US Navy training range,” according to Bray, who described the sighting as a “spherical object”: You can see it flash briefly toward the end of the video:

Tuesday’s hearing follows the release of a 9-page, preliminary report on UAP from the Office of the Director of National Intelligence in June of 2021. Between 2004 and 2021, it said, the US government had collected 144 reports of UAP, only one of which could be explained. (In that case, the object was “a large, deflating balloon.”) As for the other 143 reports? The government gave no explanations, but it did offer five possibilities as to what they might be. The categories included stuff you’d expect to see floating in the sky, like “airborne clutter” or natural phenomena like moisture or ice crystals. But it also listed some more concerning possibilities, like technology from classified US projects, foreign adversaries, or the maddeningly unspecific category of “other.” The inclusion of this “other” category, some in the media noted at the time, was certainly not evidence that UAP could be the work of aliens—but it was not an outright denial either.

Adding to the intrigue, a handful of the 144 incidents appeared to “demonstrate advanced technology,” the report noted. Here’s my former colleague AJ Vicens writing about the report at the time of its release:

On Tuesday, Bray said the total number of UAP reports has risen to nearly 400 incidents, including historic, “narrative-based” observations. The rise in cases can be partly explained by the reduction of stigma around reporting UAP sightings, he said. He also said there have been 11 reported cases of “near [collision] misses” with US aircraft.

When asked about the 18 observations with unusual movement patterns, and if those objects could be a result of activity from foreign adversaries, Bray said, “We are not aware of any adversary that can move an object without ‘discernable means of propulsion.'” He added, “There are a number of events in which we do not have an explanation. There are a small handful in which there are flight characteristics or signature management that we can’t explain with the data that we have. Those are obviously the ones that are of most interest to us.”

Whether or not you believe in UFOs (I, for one, am remaining agnostic on the issue), the hearing was historic, and a clear attempt at providing transparency to the public about these sightings. As Ronald Moultrie, Under Secretary of Defense for Intelligence and Security put it during the hearing, “Our goal is not to potentially cover up something. It’s to understand what may be out there.”

Still, as with many government hearings, the officials were careful about just how much to reveal in a public setting. During his opening remarks, Moultrie said, “We are also mindful of our obligation to protect sensitive sources and methods. Our goal is to strike that delicate balance, one that will enable us to maintain the public’s trust while preserving those capabilities that are vital to the support of our service personnel.”

The UAP hearing was historic, and many kudos to those who made this happen. But if this was your first exposure to this space, you wouldn't have any idea that there are some major problems here (via @BryanDBender yesterday here: https://t.co/8p1WCKUw1d) pic.twitter.com/67WR3vexII

Following the public event (which you can watch in full here), the committee scheduled another hearing, which, due to national security concerns, was held behind closed doors.