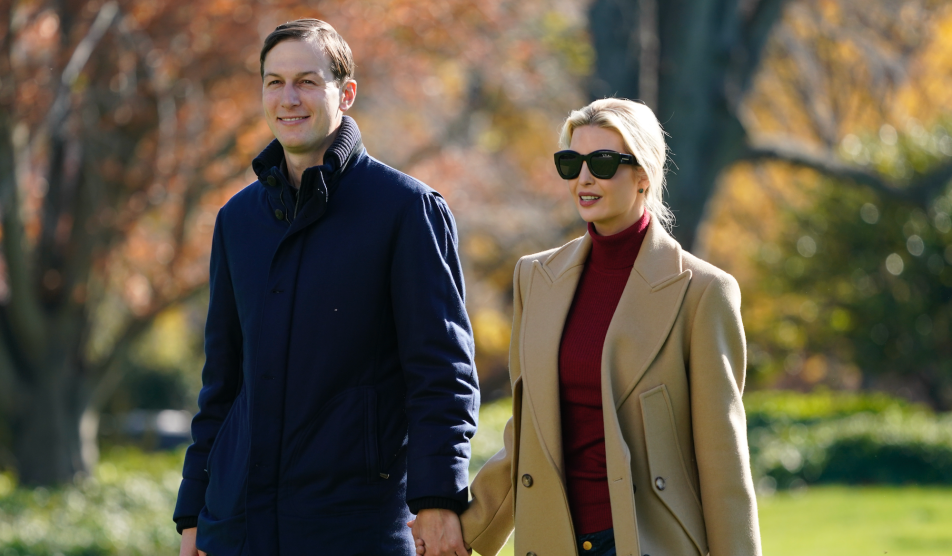 As the congressional committee investigating the attack on the US Capitol prepares to kick off its primetime hearing, a curious report has emerged on the front pages of the New York Times. Taken at face value, it offers a behind-the-scenes look at how Jared and Ivanka dealt with Donald Trump’s increasingly delusional claim that he had defeated Joe Biden and secured a second term.

“We’re moving to Miami,” Kushner told his wife from their $18,000-a-month mansion, deciding that they’d hit eject even if Trump refused to accept defeat. The Times goes on:

No matter how vociferously Mr. Trump claimed otherwise, neither Mr. Kushner nor Ivanka Trump believed then or later that the election had been stolen, according to people close to them. While the president spent the hours and days after the polls closed complaining about imagined fraud in battleground states and plotting a strategy to hold on to power, his daughter and son-in-law were already washing their hands of the Trump presidency.

Their decision to move on opened a vacuum around the president that was filled by conspiracy theorists like Rudolph W. Giuliani and Sidney Powell, who relayed to Mr. Trump farcically false stories of dead voters, stuffed ballot boxes, corrupted voting machines and foreign plots. Concluding that the president would not listen even to family members urging him to accept the results, Mr. Kushner told Mr. Trump that he would not be involved if Mr. Giuliani were in charge, according to people he confided in, effectively ceding the field to those who would try to overturn the election.

I’m no investigative journalist. Far from it! But to believe this account, at least entirely, is to ignore one of the most persistent storylines of the Trump era. We’ve seen this play out time and time again: flattering stories, somehow leaked to the press, depicting Jared and Ivanka as the least-awful members of MAGA-world. It’s hardly a coincidence that this latest one, which could help shield the couple from any accusation that they played a role in fomenting violence at the Capitol, is emerging just as the January 6 committee is presenting them as the hearings’ star attraction.

But alright, let’s assume that this account is true, that Jared and Ivanka, knowing that Dad was a loser before the race was officially called, decided to exit fast. It certainly wouldn’t be a leap to read that they spent the final days of the Trump White House checked out and overwhelmingly focused on their own reputations. But opening Trump’s orbit to clearly unhinged characters, and eventually, the January 6 insurrection, is incredibly damning on its own—and once again shreds the notion that Javanka quietly operated as some kind of moderating force against Donald Trump. That image was manufactured by Ivanka herself. But how on earth is the media still doing the couple’s dirty laundry?

I’ll leave you with the only good reason to actually click on the Times report today: That Kushner, whose parents reportedly bribed his way into Harvard, turned to a James Patterson-led MasterClass to write his forthcoming book on Trump’s legacy.