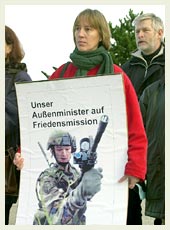 All the office machines at the German Green Party’s Berlin offices are new, says Christian Klose, the party’s regional spokesman. The old equipment had to be replaced in 1999, he says, after outraged activists kicked down the door and tossed the office’s contents out the window.

The break-in was the work of pacifist party members, furious over the party’s vote, as members of the governing coalition, to approve the deployment of German soldiers in Kosovo. That vote marked the first time the Green Party had approved sending German soldiers anywhere and seemed to starkly contradict the pacifist convictions on which the party was founded in 1979.

In mid-November, the Greens voted once more to send German troops abroad, giving Chancellor Gerhard Schroeder the support he needed to send 3,900 German troops into Afghanistan — the first time German soldiers will be deployed in a war zone since World War II. But this time, Klose expects no backlash from the party faithful.

“We long ago stopped being the party of the pacifists,” he says.

With this latest vote, Germany’s Greens completed a decade-long transformation from a party of outsiders to a powerful player in German national politics. But in doing so, critics say the party has abandoned many of the principles and much of the spirit upon which it was founded.

“The Greens are an old label on a new bottle,” says Jutta Ditfurth, 50, perhaps the most prominent of a cadre of core members who left the Greens in 1990 to found a party called The Ecological Left/Alternative List. “Behind that label is a pro-capitalist party that is also capable of war.”

Joachim Raschke, a Greens researcher, provided a less damning assessment in a recent interview in the Süddeutsche Zeitung, a leading German daily.

“It marked the beginning of a real party,” Raschke said of the recent troop deployment vote. “The Greens learned about the demands of government.”

Established in 1979, the Greens rode the wave of the country’s peace and anti-nuclear movements, which were energized by the Cold War tensions of the time. After winning some seats in state legislatures, the Greens entered the national parliament for the first time in 1983, have won 5.6 percent of the national vote. In the German system, any party gaining over 5 percent of the national vote wins a share of the seats in the federal parliament — an easier threshold to cross than that of the American system, where each Congressional seat must be won district by district.

The Greens continued to make gains through the 1990s. In 1998, the party became part of the national government for the first time, joining in a coalition with Schroeder’s center left Social Democratic Party and leaving the opposition role to the conservative Christian Democratic Union and the Free Democratic Party.

In the process, however, the party has grown more distant from the grassroots movements that spawned it, say critics, as lawyers and marketers have moved into what was a party of students and teachers. Even Joschka Fischer, who wore sneakers to his swearing in as environmental minister in the German state of Hessen in 1985, has come to prefer three-piece suits now that he is the nation’s Foreign Minister. Klose puts it another way: “Earlier we smoked pot, now we drink beer.”

Still, the turn from strict pacifism has been the most dramatic shift in the party’s policies. At the party’s congress on Nov. 25, Fischer exhorted his fellow party members to place the Greens’ peace-loving politics in the context of war. Fischer first began trying to convince the party to support the deployment of German soldiers to protect civilians in Bosnia in 1995. Though the party denied him then, he managed to change minds in 1999 and 2000, when the Greens, as part of the government coalition, approved the deployment of German soldiers in Kosovo and Macedonia. Those votes caused turmoil in the party. For many former Greens, like ex-member Lies Welker, the Kosovo decision was a step too far.

“They became power politicans,” said Welker, 53, a high school teacher who entered the party in 1987 because of its strong anti-war stance. “You need to know the boundaries and I think the Greens overstepped the boundaries.” Even Fischer didn’t escape unscathed at the time. An angry protestor attacked him with a paint bomb at the party congress in 1999, rupturing his eardrum.

That shift may have cost the party some support. The Greens have lost seats in 17 regional elections since joining the government, and have reportedly lost 10 percent of their membership. Michael Greven, a University of Hamburg professor who studies the Greens, attributes those losses to the aging of Greens voters and the inability of the party to draw support from politically apathetic youth.

“I don’t think the youth are as politically idealistic nowadays,” says Greven.

Ditfurth has a more pessimistic explanation.

“The more they’ve assimilated, the worse off they are,” she says.

Fischer and other “realos,” or realists, as those in the party’s leadership like to refer to themselves, counter their critics by pointing to the victories the Greens have helped win as part of the coalition government, including a national phase-out of nuclear power, the approval of homosexual civil unions, and pending reforms to Germany’s immigration policy. Even some Greens who oppose the deployment of troops are unwilling to abandon the party.

“It’s very difficult to watch,” says Carsten Schellhorn, 33, a radio reporter and former anti-fascist activist who joined the Greens in 1997. “But on the other side, my party can only change something when it’s part of the government.”

Die-hard pacifists cheered loudly for those delegates at the party’s Congress on Nov. 25 who spoke out against the troop deployment and further cooperation with Schroeder. But in the end, more than three-quarters of the delegates quietly voted for the deployment and continuation in the coalition government.

The question now is how far the party can go without completely alienating its core supporters. At a national meeting in March, the Greens will decide on whether or not to formally scrap the old party constitutionm which opposes military deployment of any kind.

The biggest test, however, will likely come in national elections in late 2002. Critics believe the party won’t get the necessary 5 percent to stay in the government.

Klose is not so pessimistic.

“The Green party will play other roles now,” he said. “And anyway, voters often forget.”