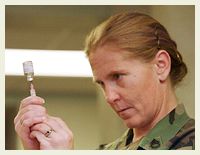 On October 17, 2001, almost two weeks after Robert Stevens died of pulmonary anthrax at a hospital in West Palm Beach, Florida, the Bush administration unveiled its plans to build up, in a big way, the National Pharmaceutical Stockpile—the drugs, vaccines, chemical antidotes, antitoxins, and other medical supplies that are kept at the ready to respond to large-scale bioterrorist attacks. The White House asked Congress for more than $1.1 billion in emergency funds to expand the two-year-old program, and some lawmakers were soon talking of increasing that amount to as much as $10 billion. Little wonder that many of the nation’s pharmaceutical companies, aided by their Washington lobbyists, have been angling for seats aboard what one industry critic calls “another gravy train to cash in on some big government contracts.”

But the pedal-to-the-metal push to stockpile vaccines has left some lawmakers and public-health advocates questioning whether Washington may be throwing good money after bad. Exhibit A in the debate has been BioPort Corporation, the nation’s sole manufacturer of anthrax vaccine. Since 1998 the Defense Department has pumped more than $130 million into BioPort, a small, privately held company in Lansing, Michigan, in hopes of stockpiling enough vaccine to protect all 2.4 million U.S. soldiers and reservists against anthrax. The Pentagon has continued paying BioPort even though the company repeatedly failed Food and Drug Administration inspections and, as a result, was prohibited from shipping any vaccine.

One reason for the Pentagon’s reluctance to cut BioPort loose may be the company’s most prominent shareholder, retired Admiral William J. Crowe, who served as chairman of the Joint Chiefs of Staff in the Reagan and Bush administrations. Crowe received a 12.5 percent stake in the company, according to his spokesman, for lending his name and expertise. BioPort’s CEO, Fuad El-Hibri, is a German-born businessman who has founded and operated a dizzying array of companies, including a Panama-based franchise operation called BurgerLand International. Last year El-Hibri and his wife each made $1,000 contributions to George Bush’s presidential campaign, a gesture that was matched on the same day by three other BioPort executives. El-Hibri did not return calls for this article.

Late last year, Defense Secretary Donald Rumsfeld said the Pentagon was trying to help BioPort stay in business, but added that the contract “may not be savable.” The department is now banking on a 10-year, $343-million contract with DynPort, a joint venture of defense contractor DynCorp and Britain’s Porton International Ltd., to procure a variety of new vaccines for diseases including anthrax and smallpox.

On the civilian side, the vaccine stockpiling effort is overseen by the Department of Health and Human Services, which contracts with pharmaceutical companies. Industry officials have said they will need substantial subsidies to develop and produce vaccines. The first case of sticker shock for the department came in October, when several large drug companies submitted bids to make smallpox vaccine, with price tags up to four times higher than what the department had estimated.

Some critics warn that the industry simply may not be able to fulfill national security needs. In recent years, manufacturing problems at some companies and unexpected withdrawals from the market by others have led to shortages of vaccines for influenza, tetanus, pneumonia, and childhood meningitis. In November, a federal antiterrorism commission headed by Governor James Gilmore of Virginia called for the creation of a government-owned facility to develop and produce vaccines for certain dangerous diseases. “The private sector is unlikely to be the answer to some of the more difficult vaccine issues,” the commission said in its report. Just days later, citing “the inability of the private sector to meet the country’s needs for vaccines,” the National Academy of Sciences’ Institute of Medicine renewed its call for the creation of a federal agency to oversee the vaccine supply.

In the wake of last fall’s anthrax attacks, such proposals have been gaining support on Capitol Hill. “The idea of saying, ‘Let’s contract with a private firm and let them do it,’ that’s misguided,” Senator Tim Hutchinson (R-Ark.) said during a Senate hearing on bioterrorism in October. “There are certain things only government can do, and, in this case, the private sector has failed us terribly.”