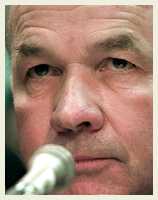 Late last month, the wife of former Enron chairman Kenneth Lay tearfully told a national television audience that she and her husband were struggling to avoid personal bankruptcy following the collapse of the Houston energy-trading company. What Linda Lay failed to tell viewers of NBC’s Today show, however, was that she and her husband had shifted millions in personal assets to investments that are beyond the reach of creditors or legal judgments.

In February 2000, Mother Jones has learned, the Lays paid about $4 million — an amount greater than Lay’s entire salary from Enron that year — to buy variable annuities that will, starting in 2007, guarantee the couple an annual income of about $900,000. While stocks and most other ordinary investments are open to attack by creditors, life insurance policies and annuities are protected in many states. Variable annuities of the sort purchased by the Lays are basically tax-deferred investments wrapped in insurance policies.

Six states — including Texas, where the Lays live — provide the maximum degree of protection to investments in variable annuities, leaving them virtually impervious to attack by creditors.

“There are a lot of people in Texas, with a lot of spouses and family around them, who are scared of having it all sued away from them,” says Ben Baldwin, Jr., the president of Baldwin Financial Systems, Inc., an investment advisory firm in Northbrook, Illinois. “It may well have been the creditor protection that drove interest in the annuity. It would have been a natural — I could see that happening very easily. Litigation is all over the place. The higher visibility a person is, the higher the likelihood of lawsuits.”

Texas law stipulates that the proceeds of annuity contracts “are fully exempt from creditors and from all demands in any bankruptcy and from execution, attachment, garnishment, or other legal process unless a statutory exemption, such as fraud, is applicable.”

“We tell people that whenever you do asset protection planning, the time to do it is when the seas are calm and there’s not even a hint of a storm on the horizon,” says David Lampe, the president of Houston Asset Management, Inc., a financial consulting and investment advisory firm. Apparently, the Lays heeded similar advice.

In her Today show appearance, Linda Lay said that she and her husband were “fighting for liquidity,” adding: “It’s gone. There’s nothing left. Everything we had mostly was in Enron stock.”

Once the annuities reach maturity in February 2007, Kenneth and Linda Lay will be guaranteed monthly payments of $43,023 and $32,643, respectively, for life.

“I know of no case where the amounts are that substantial,” says Gideon Rothschild, a partner in the New York City law firm of Moses & Singer, who specializes in estate planning and asset protection for high-net-worth individuals.

The Lays purchased the annuities almost two years before Enron filed for Chapter 11 bankruptcy protection on December 2 of last year and nearly 18 months before an Enron executive warned Lay of serious accounting problems at the company.

As has been widely reported, Lay disposed of Enron stock after receiving that warning but encouraged Enron employees to continue buying the company’s stock. The company also actively discouraged employees from using the investment strategy employed by Lay and his wife, advising them against selling Enron stock to purchase variable annuities.

A little more than a year after Lay and his wife bought the variable annuities, Enron reportedly warned its employees, through a company newsletter, against “salesmen from the Tampa area [who are] trying to move your retirement money into a variable annuity.” The newsletter went on to offer this advice: “Enron employees should also be aware of opportunities in buying more Enron shares. Several employees have bought and sold shares through our services and many are making some huge gains. Enron [stock] went to 64 last week and many shares were bought by employees. As you know, Enron is now at 72.”

Lay, who was Enron’s chairman and chief executive officer, is among the former executives of the company who are targets of shareholder lawsuits. But under Texas law, the variable annuities are untouchable unless those suing him could prove fraudulent intent.

“Obviously it’s a facts-and-circumstances test,” says Rothschild, chairman of the American Bar Association’s committee on asset protection. “If they did this months before Enron went into Chapter 11, obviously that’s a much better fact than if they did this after the lawsuits had commenced against them. And it would depend on the trier of fact, the jury or the judge, to determine what the situation is. A court might be able to find an exception in view of the amount that’s involved — not just the timing of it, but the amount.”

Lay has provided information about the variable annuities to his attorney, Earl J. Silbert, the former Watergate prosecutor. Kelly Kimberly, a spokeswoman for the Lays, declined to answer questions about the annuities. “We have decided that we won’t be discussing his personal finances,” she told Mother Jones.

Correction: An earlier version of this story undervalued the total initial investment by Kenneth and Linda Lay and overvalued the nominal total value of the annuity.