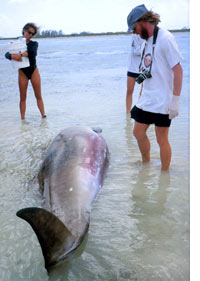 At 6 a.m. on March 15, 2000, Ken Balcomb went down to the beach in front of his house on the Bahamian island of Abaco and discovered something frightening: a whale stranded in the shallows. Over the next few hours, 15 more whales and a dolphin beached themselves on Abaco and nearby islands. “They were just coming in all over the place,” says Balcomb, a marine biologist at the Bahamas Marine Mammal Survey.

Balcomb and several volunteers managed to guide 10 of the animals back into the water. But six whales and the dolphin died. Last winter, a government investigation found that the whales had suffered severe ear trauma that damaged their navigational systems; the cause, the report said, was a test of a Navy sonar system in the waters off the Bahamas. The finding has added fuel to a long’standing dispute over the Navy’s next-generation sonar technology — a system that environmentalists say poses grave risks to marine mammals.

The new system — designed to detect new, super-quiet submarines — would transmit blasts of sound at the same low frequency whales use to communicate; even at 100 miles away, noise levels would reach 140 decibels, the equivalent of standing next to an F-15 jet at takeoff. In studies conducted by the Navy, sound at that level caused about a quarter of male humpback whales tested to stop their mating songs. “That essentially takes them out of the gene pool,” says Michael Jasny, a lawyer for the Natural Resources Defense Council. And whales may not be the only animals affected: “For so many creatures the acoustic environment is crucial to survival,” Jasny notes. “This will slowly eat away at their reproductive capabilities, their ability to feed, to avoid predators, to survive.”

The Navy, which has already spent $300 million on the system and expects it to be operational by the end of the year, argues that low-frequency sonar is critical to its ability to track modern submarines. Navy spokeswoman Paula Storum says that with careful precautions, including a warning system to detect nearby whales and dolphins, the technology will not hurt marine mammals. But critics accuse the Navy of underestimating the risk; they also say that the military, which funds much of the existing research on underwater sound, may be getting biased results.

In July, the National Marine Fisheries Service, a branch of the Department of Commerce, gave the Navy the green light to begin using low-frequency sonar. Environmentalists say they will take the matter to court. But they worry that even a ruling in their favor could ultimately become moot: The Bush administration has pushed legislation that would exempt the military from many environmental regulations, including those covering whales and other marine life.