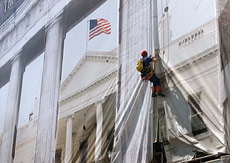 “How fitting it is that from now on the strongest image of Germany in the world’s eye is not a wall, but a gate that is open for all of us, for a more hopeful future,” Bill Clinton declared, beaming at the adulation of Schroeder and the huge crowd.

How fitting, also, to have a US leader on the same stage as Schroeder. Seeing the two embrace offered a stark reminder that, as much as Washington might get caught up in venomous words of the moment, the ties that bind the United States and Germany run deep. Economic and political ties are far too extensive and entrenched for Schroeder’s stand against German participation in a US war against Iraq to create any real rift

How fitting, finally, that the leader in question was Clinton. Schroeder emerged as a politician very much like Clinton. Like the former president, Schroeder has an exceptional feel for what voters want. He also — like Clinton — makes elaborate, astute political calculations before acting. (If Bush had made any appreciable effort at all to court Schroeder and Germany over the last two years, it’s likely the Chancellor would have taken quite a different stand on the Iraq issue.)

That said, the cries of opportunism that greeted Schroeder’s anti-war stance had a farcical quality. Of course Schroeder was opportunistic. That is what politicians do, seize opportunities and hope the gains of their opportunistic positioning outweigh any related costs. The role of the press, in such cases, should be to provide useful context, following developments over time to see how one opportunistic stance fades into another. But, given the well-established American aversion to following any international story for any length of time, the ‘German problem’ ushered in a new kind of analytical compression: Rather than waiting to see if Schroeder would indeed flip-flop on his Iraq stance, lending credence to the charges, the worst was accepted as a given. The fact that Schroeder’s message had appealed to so many in Germany – and elsewhere in Europe – was conveniently ignored.

The outrage against Schroeder — as if no one could reasonably offer objections to the Iraq war push — seemed even more dubious when Al Gore suddenly popped back into political existence, blasting Bush in San Francisco with a passionate, blistering speech that criticized the administraiton for pushing ahead with its war agenda over the objections of “many” allies. The administration did its best to ignore Gore, but the conservative pundits who had attacked Schroeder quickly redirected their vitriol. Their criticism was the same — Gore, they thundered, was a political opportunist playing on American worries.

A few days later, Tom Daschle jumped aboard the bandwagon, attacking the Bush team’s strong-arm tactics on homeland security and war on Iraq. Daschle blasted both Bush and Vice President Dick Cheney for ‘politicizing’ the debate. In other words, Daschle accused the administration of being opportunists, turning a foreign policy debate into a partisan tussle.

Gore might have given just the same speech had Schroeder not taken an anti-war stand. And Gore’s critics may be proven correct — his opposition may prove hollow and fleeting, as Daschle’s clearly was. But, looking back, it’s hard to ignore the similarities in what Schroeder, Gore and Daschle said in opposition to Bush’s with-me-or-against-me march to war in Iraq. And it’s impossible to dismiss their messages as mere expressions of political ambition. The Bush administration and its conservative supporters might be able to write off Schroeder, Gore and Daschle as individual opportunists. But they can’t write off the opportunities. They can’t pretend that a vast majority of Europeans — and a growing majority of Americans — are not deeply ambivalent and worried about the rush to war.

The Bush White House has tried its best to turn a rational political debate into a personal spat. Donald Rumsfeld stiffed his German counterpart at a NATO meeting in Poland, and Bush refused to congratulate Schroeder on his election-night victory (and sent his friendly letter marking the unveiling of the Brandenburg Gate, not to Schroeder, but to President Johannes Rau). Bush refused even to acknowledge Gore’s speech, and White House officials questioned Daschle’s patriotism.

But far worse than the paranoid, spiteful style of Bush and his advisers is the weak-mindedness and susceptibility of the media that make the Bush approach effective. The president shifts his rationale for war almost daily. He ducks questions about the diplomatic, military, economic, and humanitarian risks involved, and dismisses suggestions that the so-called evidence supporting the need for a preemptive strike is flawed or false — even when those suggestions come from his own CIA. He tells America that the goal is regime change, that Saddam Hussein is a modern Hitler who must be eliminated, but tells the United Nations that the goal is disarmament, that Iraq must simply be made to respect the will of the international community. He questions whether Democrats are truly committed to national security, but reminds us that his Democratic predecessor also favored regime change.

And, when criticized — or even questioned — Bush and his cronies yelp like injured dogs, attack the critics, and try to ignore the criticisms.

This should send a loud message to the few individuals daring enough to take a stand that their comments are hitting home — and should be followed by more pointed critiques. Instead, the administration’s approach seems to be working, scaring off or supressing the few leaders willing to suggest we pause to ponder the implications and risks before rushing to take out Saddam Hussein, and become long-term occupiers of his country.