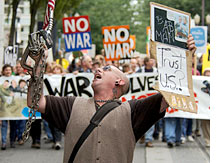 An antiwar movement is stirring — an overdue fact and a necessary one, as the Bush crowd lick their chops and the odds of war with Iraq rise by the minute, against reason, against allies, against American doubts.

The odds of one or another catastrophe in the short, middle, or long run are terribly high, and the chances of a smooth, slick, low-cost, high-gain victory are terribly low. Surely, the moment cries out for a smart, extensive, inclusive popular movement against the gangbusters approach that the Bush administration favors. Surely, the sobriety and skepticism of the American people deserve organization and mobilization.

Might this nascent antiwar movement be that redemptive moment, when the national conscience surges into the streets to take over where a supine Congress stands aside? Unhappily, no. This movement is far too weak and provincial to stop the coming war.

What a smart movement could do is put out the markers, create the organizational networks, and establish the foundation on which a more substantial antiwar movement might later be built. Alas, that is also unlikely.

The leadership of the current antiwar movement is building a firebreak around itself, turning the movement toward the bitter-end orthodoxy of the Old Left and away from the millions of Americans whose honest concerns and ambivalence might fuel it. If antiwar sentiment turns out to have any impact on the course of events, it will probably be despite the organized protests, and not because of them.

I spoke at an antiwar rally outside the UN on September 12, the same day that President Bush, inside, addressed the General Assembly. The turnout was ragged, 300 or so. But the numbers weren’t the most dismaying aspect of that gathering. The signs were.

Most of the printed placards held by the protesters said ‘NO SANCTIONS, NO BOMBING.’ The international sanctions against Iraq have been a humanitarian disaster for the country’s civilians. But doesn’t Saddam Hussein bear some responsibility for that disaster? Must that not be noted? The bombing — US and UK attacks in the no-fly zones of northern and southern Iraq — are taking place under the auspices of a mission to protect Iraqi Kurds in the north and Iraqi Shiites in the south. Again, the Iraqi leader bears responsibility; Washington and London have made a credible case for the no-fly-zone sorties because and only because Saddam Hussein has trampled these long-suffering people in more ways than there is room to describe in this space.

Those picket signs are emblematic of a refusal to face a grotesque world. They express a near-total unwillingness to rebuke Saddam Hussein, and a rejection of any conceivable rationale for using force. The left-wing sectarians who promote ‘NO SANCTIONS, NO BOMBING’ don’t want the US, or anyone, to lift a finger on behalf of the Kurds — to whom you might think we have a special responsibility, since our government invited them to rise up in 1991.

Now, those same cynics of the hard left have moved to the front of the current anti-war movement. The sponsors of what’s being billed as a national anti-war demonstration in Washington on October 26, and their eminence grise, Ramsey Clark, express no displeasure with Saddam Hussein. Their world is two-toned and, as with the Old Left at its worst, it’s always clear who’s wearing the black hats. (Ramsey Clark belongs to the International Committee to Defend Slobodan Milosevic, after all.)

This will not play in Peoria. It does not deserve to play in Washington.

Clark and others of his mindset are not only morally tainted, they’re doomed. And the antiwar movement is doomed if they are allowed to lead it. Liberal-left antiwarriors need to be out-front patriots if they expect to draw the attention and the support of Americans at large.

Many are the compelling arguments against Bush’s preventive war. For one thing, it would boost the odds that Saddam Hussein will use weapons of mass destruction either in the Middle East or, if he can manage it, in the United States. That risk and others are not hard for Americans to grasp. But these arguments are not made by self-proclaimed anti-imperialists who seem to have little to no interest in the security of Americans or the world. (If you think I exaggerate, take a look at the www.internationalanswer.org.)

Marc Cooper, that rare journalist of the left who calls know-nothings by their proper name, put it bluntly and well in the Los Angeles Times on September 29 (“A Smart Peace Movement Is MIA”), writing that “If the left is not for war against Hussein and is also opposed to economic sanctions, what is it for? If the left is for containment instead of invasion, then isn’t it the U. S. armed forces that must do the containing? … If, at the end of the day, Hussein does foil weapons inspections, what is to be done then?”

Where is the party of sense? Now that the Democrats having caved in — most are too calculating by half — who will mobilize the millions of Americans who think the Bush doctrine is dangerous, but are sure to flee left-wing pieties? Will the silent majority of American antiwarriors stand up?

Those who care about global peace and security, and reject preventive or preemptive war as the means to achieve it, should be organizing teach-ins — real teach-ins. They should be holding debates, not rallies of the faithful, mouthing nonsensical slogans.

Right now, the hard left is in charge by default, and the antiwar movement is lame on arrival as a result. If sensible antiwar forces make a valiant effort to speak outward to the American public, not upward to the gods of the hollow left, then and only then will we stand a chance of usefully weighing in against the rush to war.