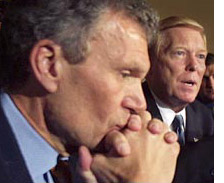 Early last month, the man many have anointed as the frontrunner for the 2004 Democratic presidential nomination gave the kind of speech liberals have long been waiting to hear from a presidential candidate. Speaking before an audience of defense intellectuals in Washington, North Carolina Senator John Edwards attacked President George W. Bush’s foreign policy as a case study in “arrogance without purpose” and “gratuitous unilateralism.”

What happened a few days later was enough to make anyone’s head spin. Edwards joined 28 other Senate Democrats and voted to approve the resolution granting Bush license to go after Saddam Hussein with all the gratuitous unilateralism he cares to muster. It wasn’t even surprising that Edwards voted yes. He was one of the measure’s cosponsors.

For liberal observers, watching Edwards in action felt like a time-lapsed version of watching the entire 2002 campaign. Across the country, Democrats in tough reelection fights fell over themselves to appear as centrist as possible (the list of Iraq resolution cosponsors, noted The New Republic, “read like a who’s who of vulnerable incumbents”). Moreover, Edwards was joined in his vote by every other Democratic presidential hopeful, although some had delivered pre-vote speeches even more war-shy than his. For the handful of Democrats in Congress with presidential ambitions, the obsessive desire to avoid offending the president’s supporters simply proved too compelling — even if, in their hearts, they clearly believed the president’s course was foolish. Two of them, Tom Daschle and Hillary Clinton, even made the astonishing claim that passing Bush’s resolution would help prevent war in Iraq. Apparently, a safe vote with the President was worth even the risk of non sequitor.

The Iraq vote was, of course, only the latest blush in a veritable Democratic love affair with “safety” this past year. From the administration’s proposal to repeal the estate tax, and last year’s fat-cat-fattening income tax cut, to this year’s underwhelming White House response to the rash of corporate scandals, the reaction from the Democratic leadership has been the same: bold, bold, bold proposals for prescription drug coverage under Medicare a smidge more generous than the Republicans’.

But now, under near-perfect laboratory conditions, we have witnessed a test of what Democrats get by responding to a reactionary and ideologically unapologetic Republican agenda with either acquiescence or timid frowns: smoking ruins. Election day 2002 marked the worst midterm performance by a party outside the White House since the Republicans in Franklin Delano Roosevelt’s 1934.

It’s not as if the leadership hadn’t been warned. In fact — as political writers had been pointing out all year, with increasing intensity as November 5 approached — a glance at the relevant poll numbers revealed that there was never anything safe about the Democrats’ headlong embrace of safety. Instead, the smart money was in taking on the President.

Consider, first, Iraq. At the time of the October resolution, a majority of Americans supported the general idea of an attack against Saddam Hussein. But when respondents were asked whether the US should invade without United Nations sanction, support was closer to 30 percent — and an invasion without UN sanction was precisely what Congress (and all those senior Democrats) voted to authorize. Consider, second, bread and butter domestic issues. Sixty-nine percent of the public favors more spending on health care (for comparison, only 63 percent want more spending on antiterrorism). More Americans are calling big business the biggest threat to the nation’s future than at any time since pollsters started asking the question in 1965. The number of people who think business isn’t regulated enough is at its highest since 1981. More than two-thirds say that most corporate executives are, simply, not honest. You’d think ambitious Democrats would be taking advantage of numbers like these. Instead, the most ambitious Democrats — the party’s leaders and presidential aspirants — fled from them. And much of the party followed.

As grassroots liberal Democrats seek to master their frustration and anger at Tuesday’s results, the simple fact that the timorousness was led by Democratic presidential hopefuls should become a central point. It helps us make some meaning from the smoking ruins. Consider recent history, and a single conclusion becomes increasingly clear: It is the queer politics of the presidential selection process that may have gotten the Democrats into Tuesday’s mess.

Succeeding in presidential politics is not, except on the most elementary level, a question of getting on the majority side of the polls. There are all sorts of elections a successful candidate has to surmount. There is the money election, in which donors vote with dollars — which explains why a Democratic politician will shy from populist economic positions even if those positions score like gangbusters in the polls. And then there’s another, far more mysterious, election; an election more in the ancient, Calvinist sense of the word, the process by which the Almighty chooses souls for eternal grace. Call it the pundit primary; it is the process by which presidential contenders get anointed by the journalistic elite as “serious” contenders, months before the first primary even takes place. It is this election that John Edwards and all the other hopefuls are engaged in now. Follow the polls to a muscular progressivism? Take on the President on a matter of “national security”? The punditry gang’ll cut candidates off at the knees before they even get started.

Date the origins of the pundit primary to 1982, when Democratic string-pullers were confident enough of certain victory against that economy-hobbled numbskull Ronald Reagan — provided they could only keep the party “united” — to adopt a system designed to effectively end the primary contest before too many cash- and energy-sapping primaries could take place (the AFL-CIO, for example, pledged to throw its support behind whoever was the early front-runner, no matter who that front-runner might be. “We hoped to get the whole thing over by Super Tuesday,” a union official recalled. )

So, a problem was born: how to weed out the pesky insurgents that party activists might sweep into contention through sheer popular momentum? Enter the pundits, who chose among aspirants according to their own autonomous judgment of the candidates’ “electability.” In the echo-chamber atmosphere of Washington, that can be enough — particularly in fixing the outcome of that other, occult election: the money ballot, where a candidate has to score early in the bunched-up, front-loaded primary system that is the undemocratic Democratic legacy of 1982.

But the voters in this pundit primary are an odd lot — odder even than the ones in New Hampshire. They don’t listen to reason. Listening to them, you wouldn’t know the polls existed. Certainly, you wouldn’t have known it — just to give an illustration of how these people think — if you watched MSNBC the night Paul Wellstone died. Instead, you would have heard David Gergen intone, in amazement: “He was a Sixties radical who never lost his idealism.” The rest of the gaggle — Mike Barnicle, and Chris Matthews, and Howard Fineman — nodded in quiet awe at the mention of Wellstone’s vote against the Iraq resolution. They neglected to note how Minnesota voters responded to his decision: They increased their support for him.

Was Wellstone’s vote a brave one? Perhaps. But it was also a smart one, one that might have, had he lived, guaranteed him victory against Norm Coleman. What would have been truly brave is if John Edwards had voted against the Iraq resolution. For if he had, Edwards too might have been patronizingly pigeonholed alongside Wellstone. He would have lost the pundit primary, because he would have shown himself to be a “liberal” — and liberals, as the pundits never tire of telling us, aren’t electable. Never mind that the polls now suggest quite the opposite.

How did liberalism become the pundits’ ultimate veto stamp? I have a theory: Baby boomers rule this tribe, and they have their heads in the Sixties — far more so than the liberals they patronize. They are so deeply invested in having “grown up” from their youthful flirtations with idealism that they can’t count anything progressive as politically viable, even when a progressive stance represents the soul of political reason.

Now, Democratic presidential hopefuls have followed the pundits’ obsessions, and they’ve lost Congress by doing so. It’s a tragic echo of 2000: As Jeffrey Toobin argues in his book on the 2000 election, Too Close To Call, it was Al Gore’s obsession with not offending the pundits that kept him from fighting aggressively against George W. Bush during the Florida recount fiasco. The pundits have won another election, their second in a row.

It’s a good thing that there are well over 250 Democrats on Capitol Hill who aren’t running for president. This year, too many of them fell in behind a leadership held hostage by presidential aspirations. The ones lucky enough to have survived the error may learn from their mistake and conclude they should have followed the public instead. To them I say: Be enslaved by the polls! Let them attack the economic royalism of the “death tax” Republicans. Let them eviscerate the arrogance-without-purpose of the Bush foreign policy team. They have nothing to lose but last Tuesday’s disastrous legacy. And they may have everything to gain. Who knows? A strong liberal record just might be what it takes to win the pundit primary in 2008.