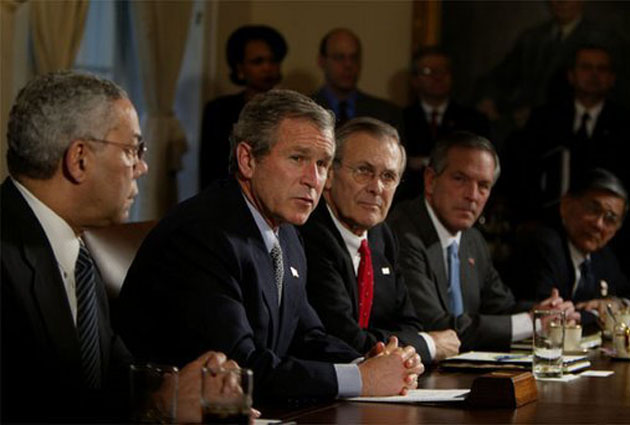 It was one of the White House’s strongest arguments for war.

For months, administration officials had been touting a series of letters purporting to show Iraqi efforts to buy uranium from the African country of Niger. If the letters weren’t exactly a smoking gun, Washington hawks contended, they were at least irrefutable proof that Iraq still had nuclear ambitions.

Then, two weeks ago, it all came crashing down. The letters, it was revealed, were hoaxes—crude forgeries discredited by nuclear weapons experts and disowned by the Central Intelligence Agency. Further, the Agency asserted that it made its concerns known to administration officials in late 2001, shortly after telling the White House about the letters. For more than a year, Washington had used evidence repudiated by its own intelligence advisors to build a case for war.

The revelations could have delivered a damaging blow to the White House’s political and diplomatic push for invasion. But the national media rapidly moved off the story, swept up in the administration’s rush to war. And it all might have ended there, but for Congressman Henry Waxman. In a scathing letter sent to President Bush last week, the California Democrat demands an investigation into what Bush knew about the Niger forgeries and when he knew it. Waxman, who voted last year to give the administration authority to wage a war in Iraq, says there is reason to believe that he and other members of Congress have been misled.

“It is unfathomable how we could be in a situation where the CIA knew information was not reliable but yet it was cited by the President in the State of the Union and by other leading Administration officials,” he says. “Either this is knowing deception or utter incompetence and an explanation is urgently needed.”

Waxman, who says he signed on to Bush’s war initiative in part because he was concerned about Iraq’s nuclear aims, wonders how the forgeries could have been used as evidence of Iraqi malfeasance for so many months after they were officially debunked. At the very least, he writes, the recent revelations have created a perception that facts were withheld to bolster the President’s case for war.

“It appears that at the same time that you, Secretary Rumsfeld, and State Department officials were citing Iraq’s efforts to obtain uranium from Africa as a crucial part of the case against Iraq, U.S. intelligence officials regarded this very same evidence as unreliable,” he writes in his letter to the president. “If true, this is deeply disturbing: it would mean that your Administration asked the U.N. Security Council, the Congress, and the American people to rely on information that your own experts knew was not credible.”

So far, however, neither the White House nor the national media seem inclined to give Waxman’s questions serious consideration.

The administration’s response has been a deafening silence, and mainstream media outlets have all but ignored Waxman’s missive. While the congressman’s charges garnered a brief mention on ABC News, it was left to Tom Engelhardt to break the news in his web log, Tom Dispatch.com. Engelhardt, an editor, historian, teaching fellow at Berkeley’s Graduate School of Journalism, and regular contributor to MotherJones.com, says that he is “staggered” by the media’s silence—especially given the prominence of Waxman, the House’s Ranking Minority Member of the Committee on Government Reform.

“You might think that when, in the midst of war, a significant member of the minority party in Congress challenges the administration’s explanation for why we acted, it might merit the odd line or two, somewhere or other,” he wrote.

Waxman spokesperson Karen Lightfoot acknowledges the congressman has been disappointed by the indifferent reception.

“It definitely deserves more attention than it has received,” she said.

Over the weekend, Waxman’s letter finally made an appearance in The Washington Post, but only as a small item buried within a larger story on the CIA’s handling of the Niger letters.

Norman Solomon argues that the mainstream media’s treatment of the story fits an established pattern. Noting that the forged letters are just the latest in a string of discredited White House claims, he argues that the mainstream media has frequently been “behind the curve” in reporting on the administration’s shortcomings. Solomon, a fellow at the media watchdog group Fairness and Accuracy in Reporting and author of The Habits of Highly Deceptive Media, faults the press for “waiting to be tossed perspectives and critiques from the administration.”

The last few months have witnessed a “slow motion Gulf of Tonkin,” he says, “and with very few exceptions, the press is swallowing it.”

Eric Alterman agrees. The media critic and author of “What Liberal Media?” says he isn’t surprised by the dearth of coverage.