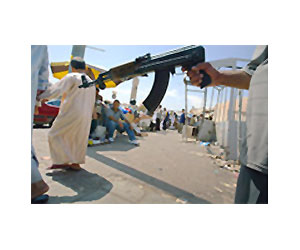 “Don’t get out of the car,” my Iraqi driver told me.

Not like I was about to. I sat stock still in the passenger seat and looked through the window at a dozen Kalashnikov assault rifles propped against a box in a market on the north side of Baghdad. Boxes of ammunition rested on the ground, handguns were piled on a crate like fresh fruit, and a young man carried a chain of bullets draped over his shoulder. Viva Zapata meets Mad Max.

Each Kalashnikov cost $200. Rather expensive today, my driver told me.

Two blocks away, an American patrol rumbled past in a convoy of armored personnel carriers, a nervous G-I Joe behind each gun. They seemed totally unaware of the small arsenal they were passing.

Guns are everywhere in Iraq, flaunted by cocky teenagers, brandished by shop owners and looters, toted by truck drivers and hotel managers, and sold openly in markets as I saw that day late in May. Politicians swagger around the city with carloads of bodyguards packing enough firepower to stage a palace coup. Gunfire, unusual in Saddam Hussein’s day, crackles over the city every night and often during the day. No one jumps.

“Every household has a weapon,” one resident of Baghdad tells me.

Almost any occasion these days calls for a celebratory round of Kalashnikov fire. When the United Nations voted to lift its 13-year-old sanctions on Iraq on May 22, Iraqis reacted by firing automatic rifles in the air. Weddings and family reunions, new business openings and parties for returning exiles are all punctuated by gunfire. And forget pistols and shotguns. Most of the rounds are coming from heavy-duty military arms, weapons of the sort Iraq used in its wars against Iran and Kuwait.

Under the Geneva Conventions, the United States is responsible for law enforcement in Iraq until a full functioning local police force can be constituted, as military flaks have often said. Yet American planners were late in grasping the seriousness of Iraq’s weapons problem. American and British soldiers are already paying a terrible price for that oversight, and Iraqis will pay a price too, long after the Americans have left.

In the month after President Bush declared an end to ‘major military operations’ in Iraq, the official US reaction to this proliferation of personal weapons sounded like something straight from an NRA pamphlet. Iraqis were free to keep and bear arms, Washington declared, even if those arms were more suitable to crushing a tank column than warding off looters.

“This is a free country now,” said Army Lt. Col. Alan King at a press briefing at the US Central Command in Baghdad on May 13, asked about US policy on weapons possession. “I mean, would you want people going into your home to take away your guns?”

Then, in late May, the occupiers changed course. Paul Bremer, the top American official in Iraq, issued new gun policies that required Iraqis to turn in military-style weapons by June 15 or risk arrest. But they were conspicuously allowed to keep small arms and that omnipresent relic of the Soviet Union, the Kalashnikov, for household defense. The message still seemed to be that, since the Americans were unable to keep law and order, it was up to Iraqis to protect themselves.

The arms round-up effort was a spectacular failure. Iraqis simply weren’t willing to hand over the guns, no matter what promises or threats US officials made. As the June 15 deadline passed, only about 650 rifles, pistols, and machine guns had been collected.

Sensible under the circumstances, Bremer’s policy is intended to repair the damage done by early inaction by the American administrators. If there is one thing the National Rifle Association is right about, it’s that dictatorships spare no effort to keep weapons out of the hands of ordinary citizens (as do a lot of democracies, like Britain). Saddam Hussein, Ceausescu, Pinochet — all put a premium on strict gun control. But those rigid controls disappeared along with the regime which enforced them. Now, everyone here — foreign human rights activists, American soldiers on the street, ordinary Iraqis — knows the country is awash in weapons grabbed by looters from military warehouses, barracks and police stations during the six weeks of disastrous laurel-resting by American administrators after Saddam’s demise on April 9.

The number of weapons floating around Iraq is simply incalculable; no one will even begin to make an estimate, except that it must number in the millions. The supply has been topped off with guns smuggled in from neighboring countries. In a series of ‘sweeps’ through southern and central Iraq, American and British troops have seized huge numbers of weapons — hundreds of assault weapons and RPG’s, thousands of mortar shells — along with heavy machine guns and massive caches of ammunition.

“There are huge stockpiles all over the country, and it’s not kid’s stuff. These are serious weapons for waging war,” said Peter Bouckaert, a senior researcher with Human Rights Watch in Baghdad. “We’re one step away from private armies and warlords.” I asked, have the Americans taken seriously the problem of weapons proliferation? “No.”

An HRW team tracked down a storage building at a military site outside Baghdad known as the Second Military College and wandered in. What they found would please anyone with a score to settle: 1,000 Katyusha rockets, stacks of Italian and Chinese-made anti-tank mines, anti-personnel mines, “Bouncing Betty” mines that leap up to decapitate their victims, dozens of rocket-propelled grenade launchers, submachine guns, crates of ammunition, all of it there for the taking. No one was guarding the site. The nearest US forces were 10 miles away.

“We reported this on May 9 and not until May 19 did [the US command] move a patrol to guard the site,” said Bouckaert.

In the Baathist stronghold of Fallujah west of Baghdad, Bouckaert saw and photographed three markets selling military-caliber weapons. The town, a maze of streets, alleys and mudbrick homes sprawled out along the Euphrates and now crawling with US troops, has seen some of the heaviest street violence since Saddam’s fall. Much of the fire has been directed at US troops. “When we went to the 82nd Airborne in Fallujah, they had no idea these markets were operating,” he said.

There are hard lessons here for any future nation-building operations the United States undertakes — lessons US forces should have learned in the wild looting and chaos that followed the invasion of Panama in 1989-90, but didn’t. The immediate danger is to the American and British troops in Iraq, but there is also the long-term threat that simmering conflict between rival Iraqi factions, large and small, will go ballistic the moment the Americans leave.

“The concern is that the proliferation of these weapons will flow over into armed confrontation. Land disputes, vengeance, they all have the potential to turn very violent very quickly,” said Bouckaert. “These conflicts can get turbo-charged with the easily availability of military-style weapons.”