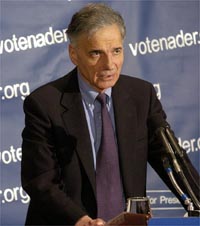 In 2000, I supported Ralph Nader’s bid for the presidency. This year, I’m not. Here’s why:

• 2004 is not 2000 This election is not a referendum on four more years of Clinton-Gore; it’s a referendum on four more years of Bush-Cheney. As a supporter of third parties and political reforms to open up the process to ordinary people (and take it away from giant corporations and the wealthy), I wish the presidential election could be about more than that. But ever since Bush revealed himself to be an unabashed unilateralist, a crony capitalist of the first order, and a millennial madman who imagines that 9-11 has given him absolute authority, it’s been hard to hope that the election could be about much more than stopping him.

• 2004 is not 2000 Neither John Kerry nor John Edwards are pale imitations of Bush. Even Nader concedes this point. When asked by Tim Russert on Meet the Press if there would be difference on issues like judicial nominations, tax cuts or environmental enforcement, Nader said “yes.” True, both Kerry and Edwards voted to authorize the Iraq War and for the Patriot Act. But prompted by a grass-roots mobilization from below—some of which has been channeled by groups like MoveOn.org, some of which found a home in Dean for America and some of which has been indicated by the declining support in the polls for Bush’s war—both men have significantly improved on those prior positions.

• We have a new way to build independent, people-powered politics that isn’t reliant on any candidate The lesson to draw from point #2, for those of us who care about changing the direction of U.S. foreign policy or civil liberties or universal health care or public financing of elections or media concentration, is to find more ways to bind together and amplify our voices; not to put our faith in any “man on a horse.” The Internet genie of mass self-organization is out of the bottle; all the money-driven top-down parties, candidates and interest groups can’t stuff it back in.

• There’s no significant base for a Nader candidacy The vast majority of progressives have come to the same conclusion about Bush. Not only aren’t prominent former Naderites like Michael Moore, Jim Hightower, Susan Sarandon and Danny Goldberg supporting him, the unions that backed him in 2000 like the California Nurses Association are on the fence, while the United Auto Workers and the United Steel Workers, who dallied with endorsing him that year, are urging their members to avoid him. Even prominent Green Party activists like Global Exchange founder Medea Benjamin and his 2000 vice presidential candidate Winona LaDuke aren’t signing up for another run. Matt Rothschild, a longtime friend of Nader’s who co-chaired the 1992 Draft Nader for President effort, is now the editor of The Progressive magazine—which no one can accuse of being a Democratic party mouthpiece. No matter—he too has penned an eloquent dissent from Nader’s current bid.

• He won’t attract Republican votes Nader’s notion that he can appeal to disenchanted Republicans and independents, and thus help defeat Bush, is mostly a fantasy. After all, he can’t help himself whenever a liberal or progressive enters his field of vision. Thus much of his rhetoric is aimed at the Democrats’ betrayal of progressive principles, or progressives’ failure to fight harder for such things as universal health insurance, an end to corporate crime, stronger environmental protections, labor rights and so on. He’s right that there are Republicans and independents unhappy with Bush’s ballooning deficits, his encroachments on civil liberties and his imperial pretensions. But Nader is kidding himself if he thinks he can get many of those people to vote for him, since he wants to raise their taxes, regulate their businesses, restrict their pleasure-seeking activities and shrink their glorious military. Once, back in 1991-92, Nader truly represented a “pox-on-both-your-houses” politics that simply stood up for the little guy against Big Everything. But since his 2000 run as a Green, it’s been clear that he mainly attracts support from the left end of the political spectrum.

• He’s not building anything lasting This campaign is not about building a third party or an independent organization controlled by its members. In 2000, Nader was running in part to boost the Green Party onto the national stage, aiming for at least 5% of the vote, which would have made the party a significant factor in presidential politics due to the rules around public financing for the general election campaign. Then, after only getting 2.8% of the vote, he disappeared from sight for months, squandering much of the momentum built by his unconventional and vibrant campaign. Now, after three years of raising money for Greens and speaking at countless party functions, he has walked away from its democratic decision-making process and refused to seek its presidential nomination. He churlishly blames the Greens for forcing this choice on him by holding their national convention in late June—too late, he claims, for him to wait for their decision. And he criticizes them for seriously considering restricting their candidate to campaigning in so-called “safe states”—the thirty or so states that most observers agree won’t be in play in the fall. But for someone who talks about spurring “civic and political energies,” this is a remarkably aloof attitude to take to the one popular institution supportive of his aspirations. But it is totally in tune with how Nader has operated over the years.

• He’s not even in a two-way conversation with the public I’ve long picked up signs that Nader didn’t really “get” the Internet; confirmation came recently when he was quoted in the New York Times as not caring that he had fewer than 800 people signed up for him on Meetup.com, compared to 45,000 for Kerry or 23,000 for Kucinich. “I really don’t deal with the Web,” he said. “There isn’t enough time in the day to go into virtual reality.” You could practically hear him sneer. As writer Matt Stoller says on The Blogging of the President, “the conversation [Nader] wants to have with the country is on the web, but he is not.” Nader’s website is all output from him and no input from us. That’s a model that used to work, but no longer.

It pains me to write all this, because I love Ralph Nader for what he has contributed to our country and for his selfless example of civic leadership. People who attack him as some kind of “egomaniac” have no idea what they’re talking about; let them spend a few hours with almost any typical member of Congress or governor to see what real egomaniacs are like. But Nader’s character is not the issue; it’s his judgment. There’s nothing stopping him from being a public citizen par excellence in this election cycle and beyond. In fact, some heavyweight progressive activists and donors had offered to create a watchdog vehicle to help Nader shine a spotlight on Bush and Congress, with the research backing and promotional support to ensure that his voice was heard. Instead, he chose to try accomplishing the same thing as a lone candidate for office. This time, I just think he’s wrong.