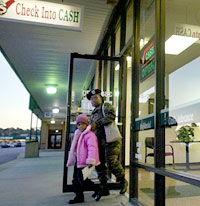 Military leaders are starting to wage a war on the home front, and
the enemy is right outside the gates of some of the nation’s largest bases. There, amid the fast-food
joints and the tattoo parlors, are the payday loan offices with neon signs that offer instant cash
and easy money. Soldiers and sailors, often struggling to make ends meet, go in for a quick short-term
loan, unaware of exorbitant interest rates—typically 390 percent annually—that
can lead into a cycle of debt.

“You feel you don’t have any other options,” says Cristie Worrow, a 29-year-old
petty officer second class at the Naval Air Reserve Station in Jacksonville, Florida, who took
out a $500 payday loan in 1998 and soon was paying as much as $200 a month in fees. The loan shop had tempted
her by promising that no credit check was needed. When she realized her mistake, she was afraid to
go to her base commander for help. After three years, $2,400 in fees, two more loans, and a lawsuit,
her nightmare ended. “People commit suicide over this,” she says.

Stories like Worrow’s have led top military officials to fight to restrict
an industry that has spread dramatically in the last four years, increasing by at least 50 percent
to roughly 15,000 offices nationwide. Faced with 37 payday loan shops outside the naval base in
Norfolk, Virginia, Rear Adm. Steve Turcotte, the commander of the Navy’s mid-Atlantic region,
urged state lawmakers to “limit the impact” of these businesses. In Southern California, the Judge
Advocate General’s Corps, the military’s legal arm, declared at least one payday lender off-limits
to military personnel. And in December, Captain John E. Cohoon Jr., commanding officer of the
Naval Submarine Base Kings Bay in Georgia, testified before legislators in favor of a bill imposing
tough new penalties against payday lenders, many of which recently opened in Georgia—even
though the state outlawed such practices decades ago. “Military personnel need to worry about
protecting our freedom,” Cohoon said, “not about meeting ever increasing payments to payday lenders.”

Georgia legislators passed the bill in March, but not without a fight.
Indeed, this and similar proposals in other states face stiff opposition from the payday loan industry
trade group, the Community Financial Services Association. The group estimates that payday loan
offices extend about $25 billion in short-term credit annually. Customers typically borrow from
$100 to $500 in return for writing postdated checks. The lenders hold the checks, expecting the
customers to return on paydays to buy back the checks for the amount borrowed, plus a fee. Often the
fees are so high that customers must borrow more to cover the costs of the first loan, and the cycle
of debt begins.

Steve Tripoli, the author of a National Consumer Law Center report on
financial schemes that target military personnel, says that payday lenders depend on customers
who have jobs and bank accounts but are just getting by. Sailors and soldiers fit the profile perfectly,
he adds, noting that they also face military discipline for unpaid debts.

Industry officials deny that they prey on military personnel, saying
that only 2 percent of their customers are active-duty military. But that figure is nearly four
times the percentage of active-duty military in the total population. And Cohoon is sure that the
industry is singling out enlisted men and women for special attention. “Military personnel,”
he says, “are ripe targets for consumer predators.”