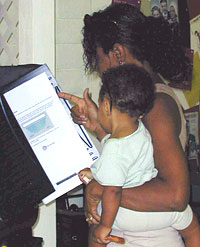 Candidates, voter education groups, and writers of trend pieces are all focused on single women voters — and they should be. According to the 2000 census, women are more likely to vote than men, but 22 million women sat out election 2000. And within that group, single women were the most likely to not vote. How important is that to the Democrats? Well, single women voted overwhelmingly for Al Gore, and if single women had voted in 2000 at the same rate as married women, an additional 6 million ballots would have been cast. In other words, it’s desperately important. So getting single women to the polls this November must be a priority, particularly for the Democrats. But there is little indication that anybody on the left really knows how to reach the millions of single women who could tip the election in John Kerry’s favor — or even who, exactly, those women are.

Earlier this year, the recently-formed organization Women’s Voices Women Vote released research on women’s non-participation, prompting a slew of stories (in Glamour, the Village Voice, The New York Times, Salon, to name a few). Within weeks, numerous get-out-the-vote campaigns were born. Each seemed designed to convince the same kind of recognizable single woman — essentially white, middle class, college educated women; think Carrie Bradshaw of Sex and the City — to please understand how important it is to vote. Chick voters can purchase “Lick Bush in ’04!” underpants for stealthy voter education drives or sign up to “Get Your Pussy Posse to the Polls” by registering and bringing ten women to vote via V-Day, the organizing arm of the play/phenomenon The Vagina Monologues. All great, and sure to appeal to the Carrie Bradshaws of the world. But that’s the problem. The Carrie Bradshaws of the world already vote.

In all of the hype, no one thought to create something along the lines of “Remember to re-register now that you’re out (Check with your State for eligibility!)” pamphlets to circulate at our nation’s women’s prisons, or “Bring Ten Single Mothers to the Polls” T-shirts to distribute at welfare agencies. That’s unfortunate, because if we really wanted to connect with the non-voting single woman, not to mention promote representative democracy, progressives would be putting a priority on the 1.27 million single women who receive public assistance and probably do not have a college education.

Single women are impossible to put in a nice clean demographic box. As seen in the Mother Jones poll, conducted in May, they are everywhere, and are every kind of woman. They are urban and rural, religioius and secular, white and black, rich and poor. The only thing they share — aside, obviously, from their marital status — is a deep dissatisfaction with the direction of the country and strong interest in, among other things, wage parity, education, and reproductive freedom. The sad fact is these are hardly revelatory findings.

Beginning in 1972, feminists identified a gender gap in the presidential election. For the first time women voted differently than their husbands and in their own interests. In other words, they discovered issues for which women would cross party lines. Childcare was one, abortion rights was another. This political consciousness meant that women were suddenly a valuable constituency, worthy of being courted, targeted, and polled. By 2000, the gender gap was at its historic widest — a clear majority of females voted for a democratic candidate. But, just as the idea of women’s “own interests” had become more complex — which women’s interests ? — so had the gender gap. The gap became more dramatically a racial gap: although white women voted for Gore in larger numbers than did white men, white women voted for Bush in the same proportion as they voted for Gore. Meanwhile, 90 percent of African Americans of both genders voted for the Democratic contender and black women were more likely than black men to vote for Gore. Moreover, having a college education was the biggest indicator of a woman voting Democratic. The Education Gap may be the big news of this election, as it’s equally important an indicator as is race or gender.

Asserting this is just a theory — but it holds as much factual water as the theory behind the current girl-voter campaigns. The major poll on single women’s attitudes — the Greenburg study — from which Women’s Voice Women Vote got their information (and which launched a thousand articles) interviewed only 2000 or so women. Like all public opinion polls, that small number is used to represent tens of millions. The polls themselves don’t provide many details about who these single women are.

The campaigns spawned from this research are fun — and there probably is some logic to giving ballot-casting, like everything else these days, a little sex appeal. (Urban Outfitters printed those “Voting Is for Old People” T-shirts for a reason.) But beneath the fun is a dangerous misconception — about who votes and about who should. The straw-figure of a Gen X entitled woman who blithely discounts voting and really wants to talk about shoes is appealing because she is the kind of person the media will write about, and also because she is the kind of person people don’t mind tearing down. But for progressives to find out why low-income female heads of households aren’t voting is a scary prospect.

Still, the hardest part of any get-out-the-vote campaign is providing the “Why,” and it only becomes more important when reaching out to the nation’s most disenfranchised citizens. But the “why” is the most persuasive element of voter education and enfranchisement. In the end, what gets people to vote is not a threat or even cute panties, but making a connection to the issues that affect them.

Can Kerry capitalize on that? Perhaps. On the plus side is his focus on universal healthcare and his staunch support of reproductive freedom, both of which speak to single women who often use birth control and are more likely than married women to be without insurance. On the other hand, he hasn’t gone after the housing project vote, and certainly hasn’t pointed out the ways in which Bush ha effectively targeted women. Think of how exciting it would be to hear Kerry say: “In addition to the war on Iraq, Bush has declared a war on women! He red-lined UNFPA funding and cut welfare, but dedicated $200 million to telling those same poor women to get married!”

Since you’re reading this on MoJo.com, we’re going to assume that you actually do want to be part of creating a participatory democracy. Most likely, you’re already registered and already vote — and even know which candidate you are going to vote for — and so do your ten friends. So, get a list of high school drop-outs, the recently incarcerated, women on welfare, and homeless families. You can contact righttovote.org, to help them with enfranchising formerly incarcerated felons (93,000 of the current prison population is female). Finally, start were you are: ask your salesclerk if she’s registered as well as the woman who runs the Laundromat and the 20 couples and families that reside in your building. Who knows? Your individual contribution might have more impact than all the trend stories targeting the “chick vote” combined.