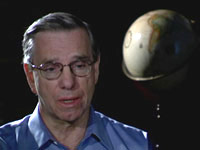 I’m Clyde Prestowitz. I was a counselor to the Secretary of Commerce in the first Reagan administration. I’m author of the book “Rogue Nation: American Unilateralism and the Failure of Good Intentions.” I’m an elder in the Presbyterian church. I’m a conservative, a registered Republican, and an economist.

I grew up in a rock-ribbed Republican family. Republicanism kind of came in the DNA. In fact, I can remember my father saying that he’d vote for a dead horse if it was a Republican.

I’ve always had a certain idea of the United States. And it was the idea of a country that led by example, that was powerful but didn’t abuse its power, that was rich but caring, and that was leading the world into a better place.

Increasingly it seems like the Republican party I knew, that I learned about at my father and mother’s knees, is leaving and has gone in a different direction. If you look at the Bush administration, it has given us red ink in our federal budget deficits as far as the eye can see. It has given us big government, not small government. The federal government is now spending more as a percent of our total GDP than any other government. The Patriot Act has been a restriction of individual rights. The states have been given unfunded mandates from the federal government, which most conservatives see as completely abhorrent. And we’re engaged in a war in Iraq against a country that didn’t pose a threat to us. We’re setting as an objective in that war that we’re going to democratize not only Iraq but the whole Middle East. This is exactly the kind of slaying of dragons, messianic foreign adventure that traditional conservatives have always been opposed to. And I’m frustrated by the fact that these policies are being sold as conservative.

A lot of people automatically identify “conservative” with “good,” so if you sell this tax cut as a conservative tax cut, then it must be a good tax cut. Well, it’s not, and don’t confuse the subject by calling it conservative.

The neo-conservative, radical conservative opposition to things like the Kyoto agreement, or to other measures to protect the environment, is frequently based on either a willful ignoring of evidence and facts, or a distortion of those. It seems to me that the essence of conservatism is not being guided by what you wish was the case, or what you hope was the case, but looking at the hard, cold facts. What is science telling us? The icebergs are melting. The polar ice caps are going away. The glaciers in the mountains are disappearing. Why is that happening? What are the facts? And once you’ve looked at the facts, then it seems to me that only a fool would not respond in some way to protect the environment.

I think that we are less safe today than we were three or four years ago. And I’ll tell you something else: I have recently had discussions with several former national security advisors — people who were national security officials in former Republican administrations — who have told me they feel the same way. They fear that the administration’s policies are further endangering and undermining the security of the United States.

I feel very strongly right now that our country is on the wrong track domestically. I think it’s on the very wrong track internationally. As a patriot, as a conservative, as a Republican, it’s important to try to change it.

This interview was recorded on September 8, 2004, as part of Mother Jones’ State of the Union series.