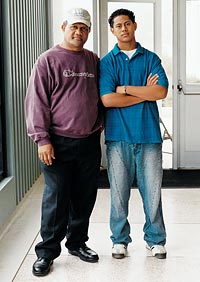 With six kids ranging in age from 3 to 29, Sweetie Williams has heard a lot of excuses for not doing homework. But four years ago, when his 12-year-old son, Eliezer, told him he didn’t have any because there weren’t enough books for students to take home, the elder Williams felt it wasn’t just another story. A call to Eli’s seventh-grade English teacher confirmed the boy’s account; books were so scarce at Eli’s San Francisco school that assigning homework wasn’t an option.

That was hardly the only problem at Eli’s school. There were chronically clogged toilets, water fountains with discolored and foul-tasting water, mice-infested classrooms without heat. All in all, it wasn’t what Williams had envisioned when he moved his family to California from American Samoa in 1999. “We’ve been told this is the land of opportunity,” he says. “Our children are being deprived of that opportunity. It’s not fair.”

Williams is a serious man with gentle eyes and a low voice that must serve him well during the Sunday sermons he gives as pastor of the First Samoan Full Gospel Pentecostal Church. He and his wife, Talogasa, work as baggage screeners at the San Francisco airport; she works the swing shift and he works graveyard. He had never been much of an activist, but when Eli’s teacher told him about a lawsuit that was being filed by the ACLU over the conditions in California schools, Williams was eager to participate. So was Eli, who didn’t see why he shouldn’t have the same facilities as kids at schools in richer neighborhoods.

“I was thinking, ‘If I’m not going to do it, who is going to do it?’” the elder Williams recalls. “It’s a California-wide problem, and it needs to be solved.” Indeed, a 2002 poll of California teachers found that nearly a third of the state’s 6 million schoolchildren attend schools where there are not enough textbooks to assign homework; 2 million are in classrooms that are uncomfortably hot or cold; and 1.7 million are being educated amid mice, roaches, or rats.

On May 17, 2000, the 46th anniversary of Brown v. Board of Education, the ACLU filed a class-action suit that came to represent more than a million California kids, accusing the state of depriving its poor, nonwhite, and immigrant children of the tools they need to obtain the free, common, and equal public education guaranteed by the state constitution. The lead plaintiff was Eli Williams.

Eli did some of the legal legwork, photographing flooded bathrooms and dangling ceiling tiles, and soon found himself getting frosty looks from the school’s principal, who insisted that Eli was exaggerating the situation. Still, Eli had no idea that the suit that bore his name was being carefully watched by educators across the country. “I didn’t think it was a big thing,” he recalls. “And when I saw it was a big thing, I wondered when it was going to end.”

Others were wondering the same thing. But then-Governor Gray Davis, a Democrat who claimed education was his top priority, hired a high-priced law firm to fight the suit, dragging it out over four years and ringing up close to $20 million in legal fees. The state’s tactics included lining up experts to testify that textbooks and heat were not crucial for learning, and subjecting students, some as young as eight, to days of harsh questioning, often reducing them to tears.

But soon after taking office, California’s Republican governor, Arnold Schwarzenegger, called off the dogs. By August, a $1 billion settlement had been reached in Williams v. California. The state agreed to immediately spend $188 million to buy books for and make repairs at the lowest-performing schools. The settlement also creates a system for students and teachers to lodge complaints about substandard conditions, and imposes a 30-day deadline for resolving them.

The money comes too late to help Eli. He’s a high school senior now, a tall, handsome 17-year-old with his father’s eyes and shy smile. “I won’t see the fruits of what’s going to happen,” he says, “but my little sister and cousins and nephews and nieces, they’ll see it.” Eli’s grades could be better—he says he’s still struggling to learn material he should have been taught in middle school. Yet he likes his communications class and hopes to go to college next year. Whatever happens, he figures he’s learned a valuable lesson, one that can’t be found in any textbook. “I learned that anyone can do this,” he says. “Anyone can make a change.”