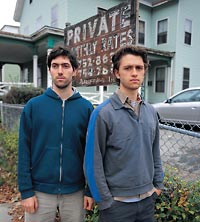 Meet Nicholas Reville and Holmes Wilson. From a decidedly modest outpost (the Worcester, Massachusetts, attic belonging to Reville’s mother), these 25-year-olds have garnered a cease-and-desist letter from music giant EMI, gotten under the skin of Apple Computer, and helped focus the notoriously unruly indie music scene on the battle against corporate control of digital music.

Reville and Wilson are the founders of Downhill Battle, a group that has broken new ground in using the Internet as a forum for civil disobedience. In their latest campaign, the duo mounted a legally dicey protest of a court decision that threatens to curtail the practice of music sampling. The 6th Circuit Court ruled in September that rap artists NWA had violated copyright by sampling a scarcely recognizable three-note guitar riff from Funkadelic’s “Get Off Your Ass and Jam” for their song “100 Miles and Runnin’.” The suit was filed not by Funkadelic’s front man George Clinton, who supports sampling, but by his label. Bridgeport Music won full ownership of Clinton’s ’70s catalog in a 2001 lawsuit and has since sued samplers for royalties more than 700 times.

Fearing the chilling effect of this decision, Wilson and Reville invited activists to download the copyrighted riff and use it to craft new, 30-second songs, a campaign they called “3 Notes and Runnin’.” The hundreds of diverse submissions — including the sweetly tuneful “Parle Menthe” and “3 Fingered Salute,” a pointed cover of “The Star-Spangled Banner” — underscore the fact that sampling can create new art. Ren Bucholz, activism coordinator for the Electronic Frontier Foundation, praises the campaign for giving “people a practical way to protest.”

That is also true of the exploit that brought Downhill Battle to national prominence — its illicit distribution of an album by DJ Danger Mouse. By remixing the vocals of rapper Jay-Z’s Black Album over instrumentals from the Beatles’ White Album, Danger Mouse created the Grey Album, which was an instant hit with critics. The Beatles’ label, EMI, however, saw nothing to extol in the new work, and threatened to sue the DJ. In response, Wilson and Reville organized a day of “coordinated civil disobedience,” enlisting more than 170 websites to make the Grey Album available for downloading. That got them a cease-and-desist letter from EMI’s lawyers. They ignored it. More than 100,000 people got a copy of the album, making it the country’s most downloaded album for the day.

Wilson and Reville’s point is not that fans and musicians should ignore musicians’ right to make money off their work, but that in the digital age, easing copyright restrictions will nurture creativity, and that ending corporate control over distribution will allow for more direct forms of listener-to-artist payment to flourish. This was the idea behind their first national campaign, iTunes iSbogus, a popular parody of Apple’s digital music site — which has increasingly displaced free file-sharing networks like Gnutella and Grokster. “Apple calls iTunes ‘revolutionary,’ but record companies are using the service to force the same exploitive and unfair business model onto a new medium,” Reville and Wilson wrote in August 2003, pointing out that musicians earn just pennies for every 99-cent song a user downloads.

It was “the Karl Rove strategy applied to Apple: Find your opponent’s strength and make fun of it,” says Tiffiniy Cheng, a friend of Reville and Wilson who, along with software designer Nick Nassar, comprises the rest of Downhill Battle. “We pierced the hype,” says Reville. “We made people think twice about it.”

Due to the emergence of iTunes and other label-endorsed downloading services, Reville says, “We are at a tipping point that will determine whether or not the music industry can move its monopoly onto the Internet.” Record labels are doing their best to get Congress to shut down file sharing. And so, from its eyrie in Worcester, Downhill Battle has begun organizing Internet lobbying efforts to help artists and the public understand that their ability to control how they create and hear music is at stake.

“This is the most winnable campaign in the world,” says Reville. “Literally, in two or three years the music industry could be decentralized and independent. And the precedent it would set for other industries — Clear Channel, or corporate news — is unbelievable.”