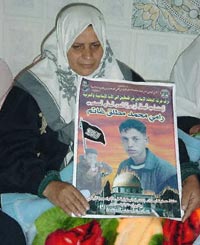 To walk past al-Manara square in Ramallah, in the West Bank, or down the main street of any Palestinian village, is to walk among the dead. The faces of the martyrs are ubiquitous, on posters plastered to every inch of every wall — posters showing grave-faced young men, and sometimes women, in commando-style bandannas, brandishing automatic weapons or explosives, against the backdrop of the Dome of the Rock mosque in Jerusalem, or the map of 1948 Palestine, stretching from the Jordan River to the Mediterranean Sea.

Last summer, a time very different from the period of tentative hope that followed Yasser Arafat’s death, I visited Tulkarem, a West Bank city synonymous, since the start of the Second Intifada in 2000, with violent Palestinian resistance and terrorism. On an August afternoon, the market, the suq, teems with shoppers laden with fresh vegetables; but when the sun sets and shopkeepers close their shutters, the streets, silent now, belong to the dead. My translator, Mohammad, and I walk through the empty market; he translates the martyr posters as we go. I ask him to sort out the dead: Who was a suicide bomber? I ask. Who killed soldiers? Who killed civilians? Who was killed by a soldier’s bullet? The distinctions puzzle Mohammad. To him they are all martyrs.

Call them martyrs, call them terrorists — what makes the young men and women of Palestine seek their death (and glory) in the death of others? And how can it be that their society so reveres them for it? How, that is, did an extremist ideology became iconic? A partial answer comes by way of a new book, The Road to Martyrs’ Square, by Anne Marie Oliver and Paul Steinberg, which examines what might be called the literature — or, more precisely, in the written and recorded paraphernalia — of martyrdom. (The book’s subtitle — A Journey Into The World Of The Suicide Bomber — is a bit misleading. Suicide “bombing,” involving explosives strapped around the waist, is not the most common form of suicide mission; nor has it been in use for that long, relatively speaking, having first been used in the Israeli-Palestinian conflict in 1994.
More common, even now, is the attack against Israeli civilian or military targets using guns, knives or (planted) explosives.) “Our intent,” the authors write in the book’s introduction, “is not to provide insight into the mind of the suicide bomber — an impossible task — but rather to explore the transformative power granted those who not only speak the old scripts but also carry them out.”

Oliver and Steinberg lived in the Gaza Strip, the West Bank, and Jerusalem during the late 1980s and much of the 1990s. Their initital goal was to to research Jewish and Christian extremist groups, but soon they began recording and collecting the cultural artifacts of Palestinian martyrdom: banners, graffiti, martyr cards, videocassettes, audiocassettes, and, of course, martyr posters, all of which proliferated during the First Intifada, from 1987 to 1993. The book argues that such media created a well-known script that young men of the First Intifada swallowed whole and perpetuated with their deaths.

The current Intifada has left thousands of Israeli and Palestinian casualties, though far more of the latter than the former. Logistically, committing suicide attacks inside Israel has become extremely difficult, owing to Israel’s construction of the separation barrier, and its policy of assassinating wanted militants. Still, the literature of suicide missions persists, capturing the hearts and minds of many Palestinians. Potential bombers know that they will be commemorated, and, even when dead, will be given a revered place in the world of the living.

At a recent lecture at the World Affairs Council in San Francisco, Oliver and Stern talked about one cell of Hamas’ military wing, The Battalions of Izz ad-Din al-Qassam. Oliver describes the last testimony of a suicide attacker:

“Consider the face of a smiling boy. A boy who says he is about to kill himself. A boy who says he wants nothing more than paradise, and intends to take as many of the enemy as possible with him into death. The boy is happy as he stands with his gun recording his last testament hours before he sets out on an operation from which he will never return. There is nothing singular about this boy, born in the [refugee] camps and raised on the streets of the [first] Intifada. There have been many like him and many will follow. Each has stood before a camcorder and each has spoken the same last words: a heady pastiche of well-worn slogans of Quoranic quotations and sacred imperatives. The script is well known. The boy seems [alive], but in fact he is already dead. A sacrificial element in an order keen on making him into an emblem. As his last words reveal, he was a willing partner in this transaction. Indeed, we know little about him except that he saw death as the ultimate fulfillment of the commands that surrounded him.”

The book’s strength is in its detailed translation and analysis of the artifacts of the First Intifada. The latter half of the book takes the reader through one translated poem and Islamic anthem after the next, the 100-plus pages of Hamas propaganda filled with allegories glorifying violence. Posters, anthems, and videocassettes repeatedly portray the suicide bomber as the bridegroom of Palestine. In his farewell videocassette one suicide bomber, Mohammad Hasan al-Hindi, leaves a few last words for the families of three young men preparing to blow up an Israeli bus. “We request that the mourning ceremony be a wedding party so that there will be a celebration in Paradise and a celebration in the dunya [life on earth], Allah permitting.”

As The Road to Martyrs’ Square explains, the message of Islamic terrorist groups is that through violence the martyr can honor God, and have a moment where the Palestinian, through violence, holds power over an Israeli.

Oliver and Steinberg don’t take the easy route of describing their subjects as brainwashed, evil, or desperate, nor of glorifying them as heroes of liberation or, indeed, martyrs; those tasks have been accomplished, many times over, by other, more politicized, hands. What they do is contribute importantly to our understanding of the world that has produced and nurtured the “suicide bomber.”