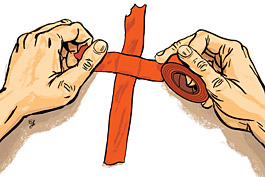 WHEN YOU SPEND your days speaking to God, pleading and praising and focusing his will on the nation’s political leadership, it’s important to remember your dreams at night. They could be coded instructions of his intent. And if their meanings seem elusive, you can always look for answers on the Internet.

“That’s what we do when we have a dream,” said Todd Loughry, an evangelical from Nebraska who had come to Washington, D.C., to pray for an end to abortion. “We Google it.” He was standing at the steps of the U.S. Supreme Court before a dozen young charismatic Christians who rocked back and forth in silent prayer. Ranging in age from roughly 18 to 30, they wore strips of red painter’s tape across their mouths. On each piece of tape was written the word “LIFE.”

In recent months, these young believers and their group, which they call The Cause, have become a new public face of conservative protest. They laid siege to the Florida hospice where Terri Schiavo died. They surrounded a Kansas City abortion clinic and the federal courthouse in Spokane, Washington, where they prayed for God to stop city funding for abortion groups. (In the final days of the Spokane siege, the City Council denied Planned Parenthood a $50,000 grant.) For nearly a year, they’ve come to Capitol Hill almost every day, traveling by van from a 90-acre farm in Maryland, to pray for a spiritual revolution in America.

The protests make a striking spectacle, and hardly a minute passes without a tourist or congressional staffer approaching to ask what’s going on with the mouth tape. “They say, ‘Well, that’s a brilliant idea. Where did you come up with it?'” said Liz Kosorski, an eager native of Michigan who was standing next to Loughry. “Well, God gave it to us in a dream.”

That particular dream came to a 22-year-old activist named Brian Kim last September. He remembers seeing thousands of people gathered at the Supreme Court with inscribed tape over their mouths, a symbolic representation, he later decided, of the unheard voices of unborn babies. He has no doubt it was a message from God, though he admits to choosing the color later on. “I dream in black and white,” Kim says.

Another member of the group recently dreamed that Grover Cleveland came to President George W. Bush and said, “There is some- thing about my administration that you need to know about.” In their regular morning meeting, the group was baffled. “Who the heck is Grover Cleveland?” Kim asked. “So one of our guys did some research.” It turned out that the 24th president is the only one to have fathered a child in the White House, a daughter named Esther. God was telling them, they decided, to live like the Bible’s Esther, a Jewish beauty whose courage helped save her people from certain genocide in Persia.

Months later someone dreamed of being assigned a term paper on an imaginary Civil War clash called the “Battle of Dirksen.” A Google search revealed that Illinois Senator Everett Dirksen helped break the longest filibuster in American history, held to stop the Civil Rights Act of 1964. So when Senator Bill Frist staged his assault against Democratic filibusters of President Bush’s mostly antiabortion judges, Cause members expanded their daily prayer schedule to 24 hours. They called it “The Battle of Dirksen.”

When not in front of the Court, the activists in the group — which was founded by Lou Engle, a California minister with seven children of his own — spend their days in a second-story office on nearby Independence Avenue. They remove their shoes, recline on the floor, pace, rock, play guitar, hammer on bongos, and sing improvised prayers. It is a jam session for Jesus. On one wall hangs a portrait of the full Supreme Court, flanked by a head shot of President Bush and a picture of Kansas Senator Sam Brownback, a deeply Catholic Republican whom, the volunteers pray, God will help elect president in 2008.

Ask them how they came to Washington, and they speak of divine intervention. “I got rocked,” says T.J. Boulet, a 20-year-old whose mop of hair covers his eyes and ears. “Jesus just busted into my life. He was like, ‘This is who I am. This is what I am about. Do you want to jump on the wagon?’ I was like, ‘You better believe it.'” Engle says he hopes to one day build a movement of 10 million youths, an effort he compares to the civil rights struggle. “They are radical,” he says of his young volunteers. “They literally dream dreams.”