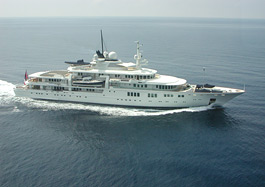 In the wake of the New Orleans disaster, I thought of an article I read
about Microsoft co-founder Paul Allen’s other yacht. The 300-foot Tatoosh
carries a 30-person crew, two helicopters, a swimming pool, a spa, a private
movie theater, six other surface boats (including a separate 54-foot racing
yacht and two Hobie catamarans) and a submarine. Reading about the Tatoosh
and a third yacht just slightly smaller made me wonder about Allen’s yacht
of choice. Did it have two swimming pools? Four helicopters? Twelve other
on-board boats? And what was Allen doing with two yachts, when he could only
ride on one at a time?

Allen bought the Tatoosh in 2000, when it was America’s second largest.
Three years later, he added the Octopus (aptly named for a Microsoft man),
enabling him to leapfrog the founder of Victoria’s Secret to own the largest
yacht in the world. Itself since surpassed by the yachts of Oracle founder
Larry Ellison and the ruler of Dubai, the Octopus is 413 feet long, with
seven decks, a 60-person crew including several former Navy SEALs, seven
other on-board boats, a basketball court, the obligatory movie theater and
swimming pool (just one?), and two submarines, one of which can stay two
weeks on the ocean floor. Allen also owns a third megayacht it turns out,
plus two personal Boeing 757’s, in case one is in the shop.

We know Allen is unimaginably rich, so maybe his yacht collection comes as
no surprise. But the Republicans are talking about permanently ending the
estate tax in the new Congressional session. Our leaders are already
lavishing more and more gifts on those who already have more than they can
ever use, even in the midst of crises from the Iraq War to the New Orleans
disaster, to the shifts in global warming that, by warming the ocean, may have turned
a routine hurricane into a cataclysmic one. Allen’s yachts remind me of our
choices about what we value.

As former Congressman Ron Dellums once said, you can tell a nation’s soul by
the state of its budgets. Time and again we have the chance to house people,
feed them, give them health care, affordable education, and a decent chance
in life. Or to invest in renewable technologies to head off future
climate-related catastrophes. Or at least to rebuild critical infrastructure
and restore dignified lives to the wounded and displaced when tragedy hits.
Each time we’re told we don’t have enough resources. Yet in the richest
country in human history, we make it a point, at every turn, to help those
of vast wealth accumulate more and more. Recently I saw a $3 million
Brentwood house being torn down so someone could build one on the same lot
worth twenty million. I’ve seen comparable extravagance throughout the
country, combined with massive cuts in practically every program that serves
the needs of ordinary citizens. The super-rich get infinite breaks with
nothing asked in return, while more and more Americans struggle just to
survive, even in the absence of unexpected cataclysm.

The proponents of ending the estate tax warn of devastated small farmers and
businessmen, though they can’t come up with a single case of a family farm
that’s gone under in recent years as a direct result, and the handful of
affected family businesses could be addressed with modest increases in the
exemption level. Evidently it’s far more salable to couch these and other
regressive cuts with salt-of-the-earth images than those of Paul Allen on
his yacht or Paris Hilton in her gilded video playpen.

We might remember Dwight Eisenhower’s famed words: “Every gun that is made,
every warship launched, every rocket fired, signifies in a final sense a
theft from those who hunger and are not fed–those who are cold and not
clothed.” So is each massive regressive tax break.

Permanently ending the estate tax will cost the public another trillion
dollars over ten years. But we were already making things far worse before
the ending of the estate tax. The top 5 percent of Americans now get $110 billion a
year from Bush’s tax cuts, with most going to the top 1 percent, during a reign
that’s cut child abuse prevention, community policing, AmeriCorps,
low-income childcare, health care, housing, and even support for military
families. Because payment of Social Security taxes is capped at $90,000,
and because capital gains taxes have been cut to a maximum of 15%,
self-employed carpenters making $30,000 a year already pay a higher
percentage of their income than do Paul Allen and his co-founder Bill Gates.
In Seattle, where I live (and in whose suburbs Allen and Gates reside), the
public paid $300 million to subsidize a football stadium for a team Allen
owns, and the City Council has just allocated $50 million to fund a
mile-long streetcar connecting downtown with Allen’s cluster of biotech
companies. Meanwhile the high school my son attends recently had to lay off
11 teachers.

We should debate where our government should spend the revenue it takes in.
But we also need to discuss where it gets this revenue, and how to share the
burden equitably. As Bill Gates Senior wrote, in opposing the estate tax
repeal, “Our society has facilitated wealth-building by creating order,
protecting freedom, creating laws to govern property relations and our
marketplace, and investing in an educated work force. What’s wrong with the
most successful people putting one-quarter of their wealth back into the
place that made their wealth and success possible?”

That’s one key argument: those who have the most benefit infinitely more
from the institutions of our society than do those who have far less. The
other argument is the concept of enough, where we question whether our most
important social priority really is to do everything possible to enable a
tiny few to buy as many yachts and $20 million houses as they please. Do we
really need to help Allen be able to fly 500 of his closest personal friends
wherever and whenever he chooses on his two 757s? We might remember that
there are more important goals to support with common resources, and more
important things to live for.