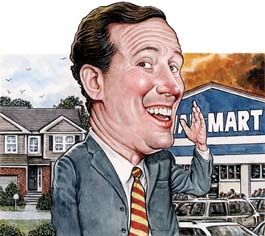 This past March, an interviewer for Christianity Today asked Senator Rick Santorum (R-Pa.) what he thought of Thomas Frank’s What’s the Matter with Kansas?, which posits that conservative politicians have whipped up working-class anger over social issues as a smoke screen for a real agenda to benefit large corporations. Santorum leapt on the question as if he’d been waiting for it. “That’s just the kind of derogatory, elitist pablum,” he declared, “that you get when people don’t realize that there’s a lot of people who don’t put their treasure in this world and look for something more than just ‘How much more money I can make?’ They understand that life is more than a bank account. That’s the postmodern view of the world, which is, ‘It’s all about me; it’s all about how much I can get now for me.’” He concluded, “Thank God for Kansas.”

Postmodernism aside, Santorum could be a poster boy for Frank’s thesis. The day after the interview was published, he became the first member of Congress to visit the media scrum outside the hospice where Terri Schiavo lay dying. The senator, who had pushed for congressional intervention to keep Schiavo alive, noted that “I was in Tampa, I was 15 minutes away, and having worked on this case, I just felt an obligation to go by and pay my respects to the family.”

Santorum didn’t mention why he happened to be 15 minutes away. He had come to Tampa in part to attend a fundraising lunch organized by one of his corporate benefactors, Outback Steakhouses. And he’d flown in on the jet of another major donor, Wal-Mart.

Indeed, while Santorum has become perhaps the Senate’s most outspoken member on hot-button social issues such as abortion and gay rights, much of his day-to-day work involves matters of interest to corporate America. This year has been typically busy. Santorum authored a bill that would relax overtime regulations and exempt numerous businesses from minimum-wage rules, a move particularly dear to the restaurant industry (thus the Outback Steakhouses event). He sponsored measures aiding campaign contributors, such as the private weather company AccuWeather (which would benefit from Santorum’s proposed privatization of the National Weather Service); the fire-sprinkler industry; beer brewers; and the tomato grower Procacci Brothers, which is being accused of migrant-housing violations in Florida. And he has been pushing hard for Wal-Mart’s agenda, which includes tort reform and changes in overtime rules—Wal-Mart faces a slew of lawsuits over sex discrimination and alleged overtime violations—as well as reform of charitable giving laws and a permanent repeal of the estate tax, which would benefit the billionaire heirs of Wal-Mart founder Sam Walton. Wal-Mart’s political action committee gave $10,000, the maximum allowable PAC donation, to Santorum in 2004, plus another $10,000 to Santorum’s PAC.

Much of this comes as news to people in the senator’s hometown, the Pittsburgh suburb of Penn Hills, where residents have been organizing against a proposal to build a 200,000-square- foot Wal-Mart supercenter. Devon Johns, a 59-year-old house cleaner and member of an anti-Wal-Mart group, was stunned to learn of the senator’s close ties to the retailer. “He says one thing and does another,” she said bitterly as she stabbed at a plate of hash browns and eggs in a café near the proposed Wal-Mart site.

Johns moved to a house near Penn Hills—a timeworn burg of steep, winding two-lane roads and modest brown-brick homes interspersed with the occasional chiropractor’s office or Pizza Hut—in 1982. Now she fears that Wal-Mart will bring congestion and crime. Local unions have also mobilized against the retailer, angered by its low wages, overtime policies, and failure to provide health care for more than half of its employees.

An outsider might wonder why the neophyte community activists didn’t take their cause to Penn Hills’ most powerful politician. That’s because many people here don’t think of Santorum as a resident. In 2001, as he began his second term, the senator bought a fortress- like house, recently assessed at $777,500, in Leesburg, Virginia, an affluent exurb of Washington, D.C.; he also owns a small home in Penn Hills, where a relative of his lives. People here rarely see Santorum, who voted by ab-sentee ballot in 14 of the past 21 elections and didn’t seem troubled by the arrangement until it came out last fall that the local school district had paid at least $34,000 to educate five of the senator’s children in Virginia through online coursework. “This issue with the school and the house—that goes against everything I thought he stood for,” says Bonnie Franciscus, the founder of the local anti-Wal-Mart group who works at a Penn Hills car dealership.

Franciscus is the type of suburban voter who helped elect Santorum to two terms in the Senate even as Pennsylvania went Democratic in presidential elections. But she says she won’t vote for him again in 2006—and she may not be alone. Polls show the incumbent trailing his likely Democratic opponent, state Treasurer Robert Casey Jr., by a whopping 14 percentage points.

Those poll numbers are one sign that Pennsylvania isn’t Kansas, and that the combination of feel-good spiritual values and hardcore corporate advocacy may be wearing thin. At a Penn Hills strip mall, an elderly man in a seersucker coat with two stickers that read “Stick to Jesus” introduced himself as Bob Humes. He said he was impressed by the senator’s political skills, and that as a retired Presbyterian minister he cared deeply about matters of faith. But he had no plans to help reelect Santorum in 2006: “I resent the way he mixes politics and religion.”