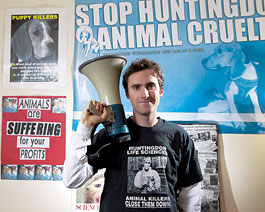 When you picture a dangerous terrorist, Kevin Kjonaas may not immediately spring to mind. The 28-year-old Catholic-school graduate stands 5 feet 10 inches, weighs 120 pounds, and speaks in a mezzo-soprano voice. He uses the word “cute” a lot. Kjonaas pays his rent by working at a doggy daycare; before that he went door to door for John Kerry’s presidential campaign but quit when he realized that his strained relationship with the law could be a liability for his employer. Kjonaas is both a vegan and a preppy. He owns almost 40 vegetarian cookbooks but is quick to point out that “I don’t cook sprouted wheat germ. It sounds so hippie-ish.” His closet is filled with J. Crew hand-me-downs, and for his birthday this year, he got a dress shirt with light pink and light blue stripes. “I really like it,” he says. “It goes really well with this sweater vest I have.”

Until quite recently, Kjonaas was president of Stop Huntingdon Animal Cruelty (SHAC USA), an animal rights group dedicated to shutting down Huntingdon Life Sciences. The U.K.-based company owns labs in New Jersey, where it tests household chemicals, pharmaceuticals, and other products on animals. In 1998, the U.S. Department of Agriculture fined Huntingdon $50,000 for animal abuses. A British television documentary showed clips of Huntingdon employees punching beagle puppies. Kjonaas grew up with a beagle named Barney. “He was my best friend,” he says. “We did everything together.”

As president of SHAC USA, Kjonaas posted the home addresses and telephone numbers of Huntingdon employees on the group’s website. Sometimes Kjonaas helped organize protests in front of workers’ homes. When he couldn’t make it to a demonstration, he posted other people’s accounts of the event, even when they included acts of vandalism. He saw himself as a conduit for information. “Since it wasn’t my words going on the site, I felt I had no place to censor,” Kjonaas says. “Of course, now that it’s my ass being indicted, those words are being censored.”

On May 20, 2004, Kjonaas and six other SHAC members were indicted by a New Jersey grand jury on federal charges that they had orchestrated an interstate campaign of terrorism and intimidation in violation of the Animal Enterprise Protection Act. The law, originally passed in 1992, was strengthened after 9/11 in response to heavy lobbying from animal-testing firms and pharmaceutical companies. The changes made it easier to convict people for attacks on animal-testing facilities and in some cases tripled mandatory jail sentences.

Kjonaas was tipped off about 30 minutes before federal agents arrived to arrest him. He prepared by brushing his teeth and pulling on a dress shirt and his best pair of khakis. He tied his beagle, Willy, to a fence in the back yard.

At precisely 6 a.m., a column of black-clad agents ran in a full sprint toward Kjonaas’ rented house in the Bay Area suburb of Pinole. One wore a balaclava. Another carried a battering ram. They entered with their pistols aimed at Kjonaas’ head as a helicopter hovered low overhead. It was a remarkable show of force, especially since, after six months of recording Kjonaas’ phone and email conversations, picking through his trash, reading his mail, and following him everywhere he went, the FBI knew that the most dangerous thing in the house was a coffeepot. “What did they think I was gonna do?” Kjonaas says. “Attack them with a floppy disk?”

Officials admit there might be somewhat of a disconnect between Kevin Kjonaas and the public’s idea of a terrorist. “I don’t want the parallel drawn to actual Middle Eastern terrorists,” says Michael Drewniak, spokesman for the U.S. attorney in New Jersey. In its 27-page indictment, the government doesn’t allege that Kjonaas plotted to kill anyone; most of the charges focus on using the Internet to instill fear in people associated with Huntingdon. If the prosecution succeeds, Kjonaas and two other defendants each face up to $1,250,000 in fines and 23 years in prison.

“That is patently absurd,” says Mark Potok, director of the Southern Poverty Law Center’s Intelligence Project, which tracks violent political groups on the left and right. “The reality is that these people have killed no one.” Which is not to say that groups like SHAC should be mistaken for Sunday bridge clubs. Potok says there is a trend of increasing violence and intimidation at the fringes of the environmental and animal rights movements, including a rise in bombings and inflammatory threats. “What is just screaming hypocrisy among these groups is the idea that you should blow things up, but the minute you hurt an animal or a human it is automatically not one of their actions,” Potok says. “It’s inevitable that someone will die at the hands of an animal rights firebomber.”

The defense of the “SHAC 7” will rest largely on the landmark 1969 case <i>Brandenburg v. Ohio</i>, in which the Supreme Court ruled that political speech is legal unless it can be shown that a defendant has told specific individuals to commit specific, imminent acts of violence. “These kids were posting things on the Internet, for crying out loud,” says Louis Sirkin, a Cincinnati-based First Amendment attorney who is representing one of the activists charged along with Kjonaas. “They were communicating with the entire world.”

Certainly, federal authorities spared no effort in trying to gather more evidence on Kjonaas. Back in May 2003, his roommates began noticing two men wearing suits who sat in a parked car three doors down from their house. (“I can’t believe they actually thought they were undercover,” Kjonaas says.) The gar- bageman told them FBI agents paid him cash to set Kjonaas’ trash aside; the mailman said the FBI ordered him to photocopy Kjonaas’ mail. Later, Kjonaas’ attorneys would discover that the FBI had also obtained warrants to tap his phone and monitor his email use.

Kjonaas and his roommates tried to have fun with their pursuers. They began to pour used kitty litter into their trash bags and douse it with pepper spray. They’d drive toward a freeway on-ramp, then pull a sudden U-turn, snickering as the agents swerved behind them. Lauren Gazzola, one of Kjonaas’ roommates and a codefendant in the case, went outside on a cold fall evening and tried to offer the men in the car some hot tea. They ignored her.

These days, when he’s not at work playing with dogs, Kjonaas is busy preparing for his trial, which is scheduled to begin February 6 in Trenton, New Jersey. He has 890 hours of videotape to watch, 600 taped phone calls to listen to, and thousands of pages of documents to review—all of it gathered during the FBI’s two-year investigation of SHAC. Both sides expect the trial to last at least three months, to be followed by years of appeals. “It’s going to be a giant pain in the ass,” Kjonaas says. “If this case wasn’t so serious, it’d be comical.”