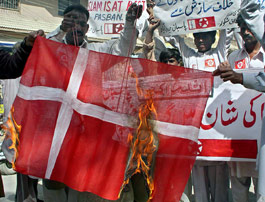 Has the Muslim world really gone that mad? Do a billion Muslims really want to kill a few insensitive cartoonists because they violated their religious sensibilities, however dear they may be?

Luckily, the answer to both questions is no. In fact, what some Islamic scholars are calling “cartoongate”–the publication of insulting cartoons of the Prophet Muhammad in more than half a dozen European papers–actually reveals more about the state of the Western, and particularly European fears of Islam, than it does about Islam today.

Originally published last September in a Danish newspaper, the depictions of Muhammad in the cartoons include some very insulting images indeed: Muhammad with a turban-shaped bomb on his head; Muhammad at the Pearly Gates informing newly arrived suicide bombers that Heaven has “run out of virgins” (an allusion to the 72 virgins that supposedly await martyrs in Heaven); Muhammad menacingly holding a sword with two veiled women behind him, and so on. The images were commissioned because the paper’s editor was having trouble finding a cartoonist willing to caricature the Prophet, depictions of whom are prohibited according to Muslim tradition.

These images have supposedly led to a firestorm of protest across the Muslim world. Yet the reality, as so often is the case when it comes to the Western portrayals of Muslims, is different than the rhetoric. Yes, tens of thousands of Muslims have marched in protest against the cartoons; but out of 1.4 billion, that’s not exactly a huge number. And death threats have been made by some extremist groups. But however upset they may be, most Muslims have not taken to the streets, and those who are protesting are doing so through democratic methods: demonstrating and threatening to take their business elsewhere.

And as the latest protests in Beirut make clear, the reasons behind them often involve issues of class, politics, and religious identity, as the consulates are often located in wealthy neighborhoods where the countries’ elites and wealthy foreigners live, and which feature expensive shops far beyond the means of most protesters. And the organizers of the protests are most often groups looking to gain political capital by challenging weak governments at a moment of heightened tension.

More interesting than these dynamics, however, is the response to them. Why is it that practices considered perfectly respectable when done by environmentalists or evangelical Christians seem so undemocratic when done by Muslims?

And before we shake our heads at how backwards Muslims are for wanting to silence those who would insult the founder of their religion, let’s remember that our hands aren’t exactly clean when it comes to freedom of the press whenever it might threaten our core interests. Indeed, the US has admitted targeting al-Jazeera bureaus, and has arrested, detained without trial, and even killed reporters (accidently, of course) for daring to report news that challenges the official American version of events, particularly in Afghanistan and Iraq.

Our own ethical lapses hardly justify curtailing the right of newspapers or other media to publish freely. It is certainly true, as Le Monde argues, that Western laws permit religions to be “freely analyzed, criticized and even subjected to ridicule.” But just because a paper has the right to free speech doesn’t mean that it should print insulting images that have no relationship to the reality of the situation they’re meant to represent.

To cite an equivalent American example, should a newspaper print an op-ed calling African Americans “niggers” just because it’s legal to do so? Of course not. Nor would any newspaper worth the paper it’s printed on print something similarly insulting about Jews. Or publish pictures of President Bush naked in the shower, or Princess Diana being autopsied, or any of an infinite variety of images which, while surely within the bounds of free speech to publish, serve no journalistic purpose.

So while it should be legal to insult people, one can ask what purpose is served by printing a picture of the founder of Islam as a blood-thirsty terrorist. How is doing so fulfilling any role of the newspaper in a free society?

Particularly disconcerting are the newspaper editors across Europe who have reprinted the cartoons “in solidarity” (as the editors of the German Frankfurter Allgemeine Zeitung has urged) with the Danish newspaper, comparing the depictions of Muhammad to caricatures of a priest or rabbi. Exactly what are they standing in solidarity with? Aside from the fact that non no mainstream paper in Europe has ever depicted a rabbi with a bomb in his yarmulke, the comparison more broadly only underscores the combination of Western arrogance and ignorance at the heart of “cartoongate”. Mohammad is not the equivalent of a priest or even of a Pope. There’s no Jewish equivalent to his place in Islam; even Jesus, while a step above the Prophet theologically (since he’s divine), isn’t revered by Christians on a human level the same way as Muhammad is.

Of course, Muslim newspapers have long depicted Jews in similarly hateful ways. Perhaps the uproar will lead them to reconsider the practice–although considering Iran has just announced that its leading newspaper will run a series of cartoons satirising the Holocaust, the chances are perhaps not that great.

Ironically, the same day that editorial pages of American newspapers began criticizing Muslims for their lack of respect for freedom of speech, peace activist Cindy Sheehan was arrested and removed from her seat at the State of the Union speech (she was invited by Representative Lynn Woolsey), simply for the “crime” of wearing a t-shirt under her jacket that listed the number of dead US soldiers in Iraq as of last Tuesday–2,245. A security guard saw the number on the shirt, screamed “Protester!” (perish the thought!) into his walkie talkie, and out she went. Nary a word of protest was uttered by the US media.

For most of the Muslim world, America’s willingness to kill tens of thousands of Iraqis and see killed thousands of our own children for a war launched on a series of half-truths and outright prevarications (which almost no one in our own journalistic establishment had the courage to expose, despite clear evidence at the time) is as “crazy” as their willingness to boycott, or even threaten violence against Westerners, because of a few religiously insulting cartoons.

This sad state of affairs would seem support the arguments made by proponents of the “clash of civilizations,” in which holds that two incompatible cultures will fight it out for control of the world and its resources. But if we look at the original meaning of “civilization,” among both European and Muslim intellectuals and until the 19th century, the term referred not to discrete and competing cultural entities with definite properties (“modern”, “traditional”, “backwards”, “advanced”), but rather to a universal concept, a state of maturity, to which all peoples could aspire and participate.

In that regard, ”cartoongate” reveals how far both Western and Muslim civilizations have yet to travel before they becomes as civilized as they imagine themselves to be.