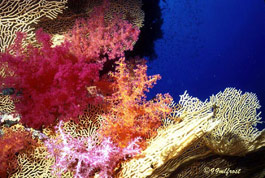 Q: What are coral reefs?

A: Coral reefs are massive structures made of limestone that has been deposited by living organisms, primarily by coral polyp—a small, fragile tubular animal that secretes calcium carbonate to create a hard exoskeleton. The polyps reproduce thousands of times to form coral colonies of various shapes, depending on the species, wave action, currents, and sunlight in the area.

Q: Where are coral reefs found?

A: In the tropical and subtropical regions of both the Western Atlantic Ocean—especially near the Caribbean islands, Bermuda, Bahamas, and around Florida and the Gulf of Mexico—and all over the Indian and Pacific Oceans, from the Red Sea down to Australia.

Reef-building corals can generally be found at depths of less than 150 feet, where they can get enough sunlight to grow. They generally require warm ocean temperatures—68 to 92 degrees Fahrenheit—and tend to grow faster in clear water, which allows light to reach the symbiotic algae that lives in the coral polyp’s tissue.

Q: What kind of ecosystem do coral reefs support?

A: An extremely diverse and interconnected one. Coral reef ecosystems include: sponges that provide shelter for tiny fishes, crabs, and other small animals; sea anemones (close relatives of corals) which have a symbiotic relationship with clownfish and anemonefish; a variety of worms, including flatworms and polychetes; as well as sea stars, sea cucumbers, and sea urchins. A wide variety of schooling and solitary fish—including sharks—are also mainstays.

Many shrimps, crabs, lobsters, and other crustaceans also find protection from predators in between coral branches. And octopuses, squids, clams, scallops, and nudibranchs all live on or near reefs, often feeding by filtering food particles from the water. It’s hardly an exaggeration to say that without the reefs, millions of these organisms would die.

Q: Why are coral reefs important to humans?

A: Apart from helping to sustain a crucial ecosystem within the ocean, and acting as an important source of biodiversity, coral reefs are useful in a variety of other ways. Corals remove and recycle carbon dioxide from the air. The reefs themselves also shelter land from harsh ocean storms and floods, and provide resources for fisheries—supplying fishes, crustaceans, and mollusks. Plus, they attract millions of tourists every year.

Beyond that, there’s evidence that organisms within the coral reefs could potentially be used to create medicine, including anti-cancer drugs and a compound that blocks ultraviolet rays. Currently, coral skeletons are often used as bone substitutes in reconstructive bone surgery.

Q: What are the primary man-made sources of danger to coral reefs?

A: On their own, coral can survive for decades, but face a number of threats from humans. Pollution—including oil slicks, pesticides, chemicals, heavy metals, and garbage—can poison coral polyps. Fertilizer runoff and untreated sewage can introduce added nutrients to coastal ecosystems, promoting algae growth, which can overwhelm and smother the coral polyps. Deforestation can also have a devastating effect on the reefs. When trees are cut down, topsoil washes down rivers into these coastal ecosystems; the soil that settles on the reefs can smother the coral polyps and block out needed sunlight.

In addition, coastal development—building seaside homes, hotels, harbors—can take a heavy toll on coral reefs. So can overfishing in reef areas. Certain fishing techniques, meanwhile, are especially harmful: fishermen using dynamite, cyanide, bleach, and other destructive methods destroyed about half of the coral reefs in the Indo-Pacific region during the 1980s and 1990s. Finally, the international seashell and aquarium trades, particularly excessive collectors, and careless recreational swimmers and scuba divers all pose a threat to the reefs.

Reefs also face natural threats, including sudden changes in sea level, diseases, and major tropical storms that can strip reefs of their corals.

Q: What is coral bleaching, and how is it related to global warming?

A: Bleaching occurs when coral polyps, stressed by heat or radiation, expel the symbiotic algae—the zooxanthellae—that live in the reefs and provide the coral most of their food and oxygen. The reefs turn a whitish color, and the coral have little energy to grow or reproduce. Usually the coral can recover unless the bleaching is severe enough, in which case, whole reefs can be destroyed.

Bleaching can be caused by a variety of factors, including diseases and ultraviolet radiation, but scientists are increasingly noting that sudden rises in water temperature are playing a major role. Between 1980 and the present there have been over 60 cases of coral bleaching around the world, and they are becoming increasingly common, especially during El Nino events, which increased sea temperatures in the eastern Pacific by several degrees and caused major bleaching events. Bleaching may become even more widespread if global warming continues to increase the sea temperature.

Q: How badly have coral reefs been damaged in recent times?

Q: Can damaged reefs ever come back?

A: Sometimes, depending on the extent of the destruction. The 2004 study also found that about 16 percent of coral reefs had been damaged by unprecedented bleaching in 1998, but about two-fifths of those had recovered. If given the opportunity, the 50 percent of coral reefs in the world that aren’t yet damaged beyond repair could, potentially, recover.

Q: What is being done to save the reefs?

A: At home, the United States federal government has prohibited the removal or destruction of corals from all areas of the continental shelf within a three-mile limit. In waters off Florida, collection of dead coral is regulated by the Florida Marine Fisheries Commission. Hawaii, Guam, and Puerto Rico have banned the collection of all hard corals, both living and dead. Around the world, the Convention on International Trade in Endangered Species of Wild Fauna and Flora (CITES) regulates international trade of certain corals. The creation of marine sanctuaries—like the Great Barrier Reef Marine Park, established in 1975—may help.

Q: What more can be done?

A: According to the Coral Reef Alliance, the international community should create effective marine protected areas, and make sure that reefs have fewer stresses on them so that they have the opportunity to recover from bleaching and adapt to increasing temperatures. Efforts should include enforcing laws against coral destruction, controlling pollutants, and controlling coastal development.

In September 2000, the IOC/WB Working Group on Coral Bleaching and Local Ecological Response was created to “integrate, synthesize, and develop global research on coral bleaching” and develop new tools to intervene if necessary.

Q: What are some groups working to save the coral reefs?

Two major groups are the Coral Reef Alliance and the Global Coral Reef Monitoring Network, which researches and monitors reefs to provide for effective management.