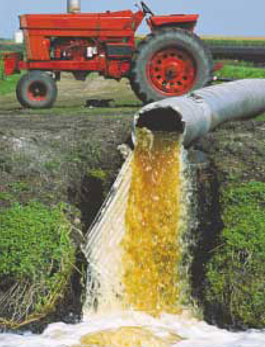 Q: What are the sources of water pollution?

A: There are many, especially toxins that come from industrial and municipal wastewaters, runoff from farms and urban areas, and the erosion of soils. These toxins can include naturally-occurring chemicals that are present in higher concentrations because of human activities as well as new, man-made compounds such as DDT.

Other pollutants include biostimulants from sewage and industrial wastes; oil from runoffs, accidental spills, and oil and gas production; sediments from erosion caused by farming, forestry, mining, and development; plastics and other debris from ships, fishing nets, and containers; thermal pollution from the cooling water that comes from power and industrial plants; human pathogens from sewage, urban runoff, and livestock; and finally, alien species that are introduced into a habitat by ships.

Q: That’s a lot of pollutants. What are the most important?

A: Since the Clean Water Act was passed and reauthorized in the 1970s and 1980s, the most harmful pollutants have actually come from diffuse sources rather than direct discharges. For example, oil pollution from ships, accidental spills and production activities has been curtailed after a concerted effort by environmentalists and policymakers, but diffuse pollution from various land-based activities—for instance, urban runoff—has not.

Of these pollutants, nowadays coastal areas are most endangered by the introduction of excess nutrients that overwhelm the local ecosystem.

Q: How does pollution enter the water from these diffuse sources?

A: Pollutants from diffuse sources include those released into the atmosphere by fossil-fuel and waste combustion, along with pesticides, toxic-waste products, nutrients, and sediments that enter the water as runoff from the land. According to a Pew report on water pollution, the latter is the primary source of pollution in coastal waters, which is, in turn, where the “most demonstrable effects on living resources occur.”

Q: What effects does water pollution have on life in the water?

A: Toxins, such as those from industrial wastewaters, can poison living organisms—causing disease and reproductive failure, and can also pose human health risks. On the other hand, organic wastes—such as nitrogen and phosphorous—can overload coastal habitats and cause serious depletion of dissolved oxygen supplies needed by marine animals. It’s true that normally, these habitats need nutrients, but too much can over-stimulate the environment, creating more organic matter than the ecosystem can handle. These wastes can also stimulate algal blooms, which can often kill off other organisms in the area.

Meanwhile, sediments from land runoff or dredging can decrease the clarity of the water and smother and cause the loss of sea grasses and coral reefs, which can in turn alter the food chains that support fisheries in the area.

Q: What measures have been taken so far?

A: As mentioned before, maritime pollution has subsided somewhat over the past 30 years, thanks to the Federal Water Pollution Control Act, which was passed in 1972, and reauthorized twice in the 1980s as the Clean Water Act. The law imposed uniform minimum federal standards for municipal and industrial wastewater treatment, and put limits on pollutants in discharges from industrial facilities—requiring plants to adopt up-to-date pollution-control technology.

The Clean Water Act also increased standards for waste treatment plants—under law, about $125 billion was spent between 1972 and 1992 creating new public treatment works. The ban of pesticides and other harmful chemicals such as DDT, PCBs, and lead additives in gasoline, have also helped to control maritime pollution.

Q: Have these measures worked?

A: Yes, despite the fact that there has been a steady increase in population in the United States, as well as an increase in wastewater discharge, maritime pollution has decreased dramatically. Oxygen levels in New York Harbor, for instance, are now 50 percent higher than they were 30 years ago. In the Southern California Bight, off Los Angeles and San Diego, inputs of many pollutants have been reduced 90 percent or more over a 25-year period, and the ecosystem there—including kelp, fish, and seabird populations—has greatly recovered.

Q: What are the next steps?

A: As noted above, the most serious water-quality problems come from diffuse sources, and those are more difficult to deal with. According to a Pew report on water pollution, slowing or reversing coastal pollution will, in particular, require management strategies for a variety of watersheds that are often far inland from coastal environments.

Some measures to reduce pollution could include: advanced treatment of municipal wastewaters; the reduction of nitrogen oxide emissions from power plants and vehicles; the control of ammonia emissions from animal feedlots; the more efficient use of fertilizers and manure; and the restoration of wetlands and floodplains that often act as nutrient traps for runoff.