Welcome news for dolphins, porpoises, and all who wish them well: Japan today lost a vote to have the so-called “small cetaceans” (mini-whales) removed from the protective purview of the International Whaling Commission, which just began a five-day meeting in St. Kitts in the Caribbean.

If you haven’t been following this closely, Japan is pushing hard to persuade members of the 70-country IWC–whose remit is essentially to conserve whale populations–to agree to ending a 20-year old moratorium on commercial whaling. The 2/3 majority the Japanese need to overturn the ban outright seems beyond their reach for now, but there are plenty of proposals coming up for a vote short of full repeal that will loosen restrictions on whale hunting. The small-cetacean measure was one of these–another would ban groups like Greenpeace from snooping around whaling vessels–and the fact that Japan’s push failed suggests it lacks the strength to win on the others. (This despite Japan’s allegedly having bought the support of other countries with foreign aid.)

Three countries have kept on hunting whales despite the 1986 moratorium: Norway, which has ignored the ban entirely; Japan and Iceland, which have exploited a loophole that permits whaling for purposes of “scientific research.” (See photo below.) 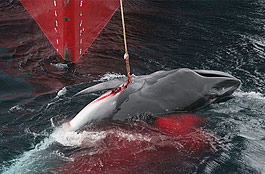 Why is Japan so hot to overturn the ban? Not clear. Whale meat from the “scientific” hunts is sold commercially and, thanks to the Japanese government, is a staple in school lunches; fact is, though, Japanese people don’t much care for whale meat, and the industry subsists in large part on government subsidies. Puzzled outsiders apparently put Japan’s whaling jihad down to “a small caucus of politicians who have turned the issue into one of ‘culinary imperialism,’ in which Japan is defiantly asserting that it will not be told what to eat, any more than Australians should be told not to eat kangaroo.” (LAT)

For more on whale-, dolphin-, and ocean-related developments, see Mother Jones’ recent special report on the state of our oceans, which includes this article on Japanese scientific whaling and this interview with filmmaker Hardy Jones, aka the “Dolphin Defender.” For up-to-the-minute coverage of the IWC meeting, see Greenpeace’s “Ocean Defender” blog. And to find out what you can do to protect our oceans and the critters and plants that live in them check out “Ocean Voyager“, Mother Jones‘ interactive online journey (video! photos! ocean sounds!) to defend our seas.