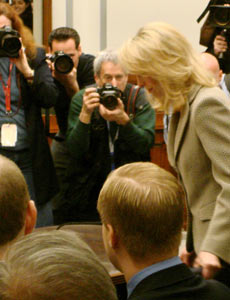 It was supposed to be a hearing on “White House Procedures for Safeguarding Classified Information,” read: White House involvement in the outing of former CIA agent Valerie Plame Wilson. But what unfolded today before the House Committee on Oversight and Government Reform was nothing more than a media frenzy. As Republican Representative Lynn Westmoreland noted, “I was here during the steroids hearing with all those baseball players and even they didn’t get this much media attention.” Representatives literally couldn’t hear Wilson take her oath for all the camera shutters clicking.

But you can’t blame the media, can you? Today’s hearing was the first time Wilson has testified publicly about her outing; reporters have been starving for any tidbit from her as the celebrity buzz around her—book manuscript under review by the CIA; Warner Bros. working on a film; lawsuit against the Bush administration set for oral arguments in May—has been building. Not to mention that Wilson is a blond bombshell in the Capitol’s sea of bald heads and drab blue suits.

Despite the ruckus—cameramen and women climbing on tables, crowd noise leaking through the doors that constantly opened as photographers filed in and out to get their fix—Chairman Henry Waxman (D-Calif.) was determined to get down to business. “It’s not our job to determine criminal culpability,” he said, “but it is our job to understand what went wrong and to insist on accountability and to make recommendations for the future—to avoid future abuses.” (The abuse, of course, was the leaking of Wilson’s CIA identity, a move generally believed to have been payback for her husband, Ambassador Joe Wilson, who exposed the Bush administration’s false claims about Iraq seeking yellowcake uranium from Niger; Vice President Cheney’s former chief of staff, Scooter Libby, was convicted in the leak case earlier this month.)

Waxman wanted three questions answered. How had this happened, did the White House take the right steps to investigate the leak, and what changes needed to be made to prevent future breaches of conduct? And he wanted to hear from Wilson.

She did not disappoint. “My name and identity were carelessly and recklessly abused by senior officials in the White House and State Department,” she testified. “I could no longer perform the work for which I had been highly trained.” She testified that she “was involved in secret worldwide operations and traveled to foreign countries.” She said she was part of the CIA’s “counter-proliferation unit,” and that “It was not common knowledge on the Georgetown cocktail circuit who I was.”

In their questioning, Democrats mostly focused on Wilson’s covert status, with Rep. Elijah E. Cummings (D-Maryland) the most direct. “Covert or no?” he asked. “Was Toensing correct?” “I was a covert officer of the CIA,” Wilson replied strongly. Victoria Toensing, a former chief counsel to the Senate Select Committee on Intelligence, has argued in numerous op-eds, and in congressional testimony, that the outing of Wilson was not a big deal because she did not hold a sensitive position.

There were other attempts to discount allegations against White House officials for their transgressions. Ranking minority member Tom Davis sought to make clear that even if Wilson was covert, administration officials didn’t do anything wrong if they didn’t know that at the time they told columnist Robert Novak about her identity. Davis also blamed the disclosure on the CIA, arguing that Langley needs to get better at protecting agents.

In any case, Democrats had a field day expounding on the leak. Representative John P. Sarbanes (D-Md.) thundered that the scandal “paints a picture of an administration full of bullies, one that will justify any means for their ends. It is the result of a syndrome that’s developed. It is an arrogance of power run amok.” Representative Dennis Kucinich drew parallels between the Plame case and the purge of eight federal prosecutors now preoccupying Washington: “I can’t help but think of you when I think of the U.S. Attorney case,” he said.

Needless to say, that kind of debate was not what the paparazzi were there for, though. As soon as Plame’s testimony concluded, photographers and reporters stampeded out, literally tripping over each other to get to the door. Left behind were a cluster of men in blue suits, and a lot of empty seats.