In today’s edition, the third and final of your daily Coachella wrapups, enjoy: Rage! French bands! Predicting riots… after they happen! And a bro factor through the roof! This day is written in the blisters on my feet: let me unwrap the bandages for your benefit.

4:10 pm – Walking to the venue (our rental house is within walking distance, a move which I highly recommend) we wonder aloud about what the presence of a reuniting Rage Against the Machine will mean in terms of the attendees. As if to answer our question, as we turn the corner into the festival parking area, a football flies through the air, caught by a shirtless bro, with shaggy blond hair and cargo shorts. We laugh, until his pit bull runs out to greet him. Then we just start walking faster.

4:42 pm – We’ve been enjoying the epic instrumental rock of Explosions in the Sky as we walk up, but they finish as soon as we make it through the gates. Oh well.

4:54 pm – Next stop: Junior Boys on a smaller side stage. They’re good, but their midtempo electro with whispery vocals suddenly starts to remind me of Spandau Ballet. Not that there’s anything wrong with that. 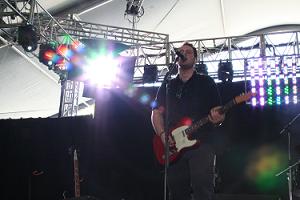 Above: Junior Boys, who know this much is true

5:15 pm – Off to the dance tent to check out Soulwax “Nite Versions”. This is the new concept from the Belgian Dewaele brothers, whose rock-ish band, Soulwax, kind of pales next to their DJ sets as their alter egos, 2 many djs. “Nite Versions” seems to be an attempt to marry the two concepts, with live musicians as well as fast-paced sampling of other artists. It’s a pretty good idea. They sneak witty references into the set: mixing Tiga’s “You Gonna Want Me,” which they produced, into an early ’90s dance track with the same line; replacing “Funkytown” in the well-known mashup of their “NY Excuse” track with Sylvester’s “Do You Wanna Funk.” 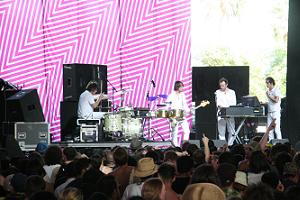 Above: Soulwax do Nite Versions… during the day!

6:10 pm – Off to the Outdoor Stage for Kaiser Chiefs, who start with “Every Day I Love You Less and Less,” and do their best to fire up the crowd with their laddish antics. Oh, you Brits. 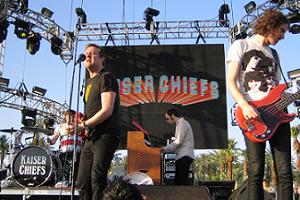 6:30 pm – The Chiefs play “I Predict a Riot,” which reminds me, we talked to some people working the show who mentioned there was some sort of riot in the campground on Saturday night, possibly involving fireworks being mistaken for gunshots and police firing beanbag things into the crowd. As if camping in the parking lot could be any worse.

6:45 pm – Intrepid photographer Kristi emerges from the photo pit saying the Kaiser Chiefs fans at the barrier were pretty chatty, wanting to know who she was taking pictures for. “Well, Mother Jones, for one,” she said, and one guy went into a whole thing about how he likes the Mother Jones, but The Nation has been around longer, since 1872, or something, and blah blah blah. “Okay,” she said, “I’m going to keep taking pictures of the Kaiser Chiefs now.”

7:00 pm – Willie Nelson takes the main stage. It’s so crowded there’s no way I can get over there and back in time. Sorry, Willie, I love you. From afar I can see his bandana’ed head on the giant Jumbotron.

7:20 pm – British up-and-comers Klaxons play a small side tent. The smell of weed is heavy in the air, and upraised hands hold multicolored glowsticks. Maybe there is something to this whole “New Rave” trend.

7:38 pm – I take off from Klaxons, reluctantly, because next door Swedish folk singer-songwriter Jose Gonzalez is playing, and I love him. I manage to sneak into the packed tent right at the front, which is a good thing, because his quiet, James Taylor-style acoustic guitar numbers are no match for the techno emanating from the geodesic dome just a few yards away. Despite the distractions, he’s astonishing. The first thing I see is his well-known cover of electro band The Knife’s “Heartbeats,” which he has morphed into a planitive, delicate lament. The softly lit palm trees behind him seem strangely appropriate.

7:55 pm – I can’t tear myself away from Jose Gonzalez. Despite being accompanied only by a bongo player and backup singer, the sound is as full and rich as a symphony, and people seem hypnotized, clapping along as the songs swell to a climax. He ends with two covers: a haunting version of Massive Attack’s “Teardrop” with a double-time bongo accompaniment, and finally, Bronski Beat’s “Smalltown Boy.”

8:40 pm – In order to provide Mother Jones readers with the most comprehensive Coachella coverage, I’ve split up with intrepid photographer Kristi. She’s remained in the Klaxons tent to document Lily Allen, while I head off to see Air. I find out later Allen was a disappointment, forgetting lyrics to her songs (and she’s only got, like, ten!) and whining about a sore throat right before lighting up a cigarette. 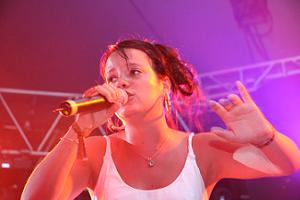 Above: Lily Allen, who can’t remember what happens when she sees you cry

8:55 pm – Back at Air, things are getting tense. The French band was supposed to go on 20 minutes ago, but there’s no sign of them. The “down time” between main stage bands (that would allow them some rare quiet here on the side stage) is rapidly dwindling.

9:02 pm – People are starting to leave. Do I hear booing from the crowd nearest the stage? Eek.

9:05 pm – Manu Chao starts his set a little early on the main stage, before Air has even begun. It’s a cacophony of noise, even as far away as we are, and will definitely interfere with Air. Plus I kind of wanted to check him out. This sucks.

9:12 pm – Finally, Air emerge. They are barely audible. I watch them do a number from Premieres Symptomes, then “Cherry Blossom Girl,” but Chao sounds like a freaking carnival from the main stage. Finally I decide to run over and check it out, if only for Mother Jones editors, who have asked me to. 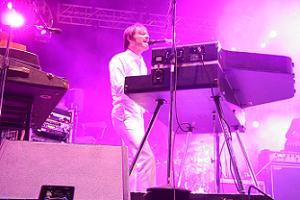 Above: French band Air taking their own sweet French time

9:24 pm – As I make it to the main stage, the intense, uptempo, minor-chord Latin rock I was hearing ends, and gives way to a jokey acoustic number, “Bienvenidos a Tijuana.” It’s kind of dumb. I left Air for this? A trio of women in front of me are doing some sort of synchronized dance. I decide to run back to Air.

9:35 pm – I approach the side stage as Air finishes “Sexy Boy,” then tell the crowd “you are sexy,” and walk off stage. That’s it. They’re done. Apparently Goldenvoice has held Air to their predetermined cutoff time, despite the late start, so they played five songs. Arggh!!

10:00 pm – After some complicated reconnaisance, I meet up with my friends in the VIP corral. There are tales of a Lindsey Lohan sighting, and a story about Brazilian combo CSS, whose song, “Meeting Paris Hilton,” is clearly mocking the famous-for-nothing young lady; however, at their side stage performance, apparently Ms. Hilton was actually watching from the side of the stage, and the band gave a desperate-seeming explanation before the song about how they actually love Paris and the song is just for fun, ha ha ha. Very disappointing.

10:40 pm – Rage Against the Machine takes the main stage, and I realize I don’t entirely hate them. The sound is bad, and they don’t seem like they’re enjoying this very much, but I start to see how the straighforward, mostly one-chord songs make more sense in a live context, and I almost enjoy it. But my friends emerge from the crowd incensed about the awful sound quality and sloppy performance. We hightail it out of there before the end so we don’t get stuck in a people-jam of angry bros full of pent-up rage, ready to sick their pit bulls on us if we don’t correctly recite lines from “The 300.” As we walk back to our house, we can hear the crowd’s screams, even a mile away from the venue. 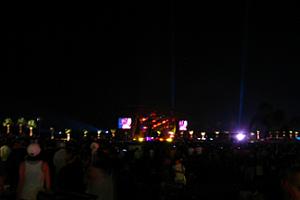 Above: Rage Against the Machine, from a safe distance

So, a strange Coachella this year. No standout, legendary performances, some odd scheduling, and bro-centric headliners (instead of, say, Radiohead and The Cure) were serious negatives, although some side stage performers really stepped up to the plate. But it’s always hard to judge right afterwards, when your aching feet and sunburned forehead combine with the post-coital letdown to form a vague malaise. Give me a couple months to mull it over, decide how it all was, and start making plans for next year.

Thanks to Kristi Highum for her photography; for more of her shots of Coachella 2007, head over to her Flickr set.