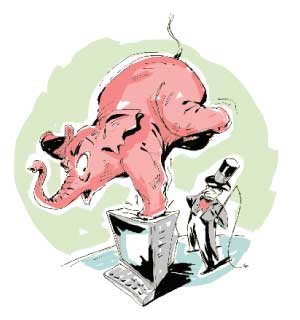 In 1992, Stanford University censured a law student named Keith Rabois for shouting at a university lecturer, in front of the man’s house, “Faggot! Faggot! Hope you die of aids.” The incident became a cause célèbre for the group of students who, a few years earlier, had founded the proudly right-wing Stanford Review. Having bonded as a conservative shock troop in the culture wars, many of them would go on to cofound the company that became PayPal, where employees often kept Bibles in their cubicles and held workplace prayer sessions. “That was a little unique for Silicon Valley,” notes Rod Martin, a Southern Baptist who was a top lawyer at PayPal. “But that was exactly the way they would want it to be.”

PayPal staffers dreamed big: They hoped to establish an alternative electronic currency to bypass national fiscal policies, in much the same way a previous generation of conservatives had advocated reviving the gold standard. But that vision was stymied after PayPal was sold to eBay, and its group of believers dispersed across the think-tank and media landscapes. Cofounder Peter Thiel joined the board of the Hoover Institution, another exec became a research fellow at the conservative Independent Institute and was a producer of last year’s Hollywood hit Thank You for Smoking, while a third launched a conservative publishing company.

All that, though, felt a little old media, and as Martin and his cohorts watched the success of MoveOn.org, founded in 1998 by fellow techies just up the freeway in Berkeley, they grew jealous. “Nobody on the conservative side was doing anything like it,” says Martin, who left PayPal in 2002 and became a full-time activist in 2004. “There were several of us who just looked at each other one day and said, ‘You know, somebody needs to do this, and I guess we’re it.'” Their answer to MoveOn is slated to debut this summer under the name TheVanguard.org, a wry riff on Vladimir Lenin’s description of the Communist Party.

Martin acknowledges that TheVanguard faces a tough road ahead. The only existing conservative organization vaguely resembling MoveOn, RightMarch.com, counts 1 million members compared with its rival’s 3.3 million, and its activities are largely limited to emailing elected officials. Conservatives are just too busy to participate in MoveOn-style virtual town halls, social networks, and marches on Washington, says RightMarch founder Bill Greene: “Most of them are just hardworking, everyday patriotic Americans that have families and kids and dogs and cats and jobs.”

Ever since YouTube sold out to “those evil guys at Google,” says Charlie Gerow, conservatives such as himself have been convinced the site’s managers have a clear liberal bent, plugging anti-Bush spoofs on the home page and occasionally pulling conservative videos, such as pundit Michelle Malkin’s anti-Muslim “First They Came.” (Even the New York Times faulted the site for a “slippery slope of censorship”; YouTube denies any bias.) But YouTube’s outcasts are now Gerow’s insurgents: In March he launched QubeTV, a video-sharing site for the “conservative army with cameras.”

More than 100,000 people visit QubeTV daily for user-generated videos such as “Redneck Judge” (a Bud-swilling peta foe), clips of Ronald Reagan, grainy posts from Newt Gingrich, and slick fare from the Heritage Foundation. Short of nudity and death threats, almost anything goes. “If you have a better mousetrap,” Gerow says, “they will beat a path to your door.” (That’s the hope, at least. In May, OURcountry, a conservative video site put together by the creator of George Bush Sr.’s infamous Willie Horton ad, Floyd Brown, suddenly went offline.)

Not everyone is thrilled with the idea of a conservative haven on the Net. “I don’t think we need to be building gardens and digging moats,” says David All, a Republican online political consultant who’d rather see conservatives influence YouTube from within. “I think we need to plop right down among the group of people singing ‘Kumbaya’ and tell them why they’re wrong.”

Martin believes he can leapfrog MoveOn by outfitting TheVanguard with the latest online video and social-networking tools. Mobilizing such virtual communities for real-world activism “is really the Holy Grail for everybody,” he says. So far, TheVanguard’s achievements have been more modest: an email list of 100,000, online fundraising (via PayPal, of course), and a beta site that includes blogs and a connection to a Vanguard interest group on LinkedIn, a career-networking site founded by yet another former PayPal exec. The operation’s board members include ex-Apple ceo Gil Amelio, antitax lobbyist Grover Norquist, and Marvin Olasky, the Bush adviser credited with mainstreaming the term “compassionate conservative”; its 10 staffers are led by Jerome Corsi, coauthor of the anti-John Kerry book Unfit for Command, and, until recently, Richard Poe, a former editor of the conservative magazine Front Page.

Martin believes TheVanguard’s platform (flat tax, missile defense, and Social Security privatization) will galvanize a conservative consensus he believes remains strong beneath a fracturing gop coalition. Beyond the presidential campaign, he aims to target members of Congress considered rinos (Republicans In Name Only), seeking to pull the gop rightward just as MoveOn, in his view, has pushed the Democrats to the left.

To skeptics, though, the PayPal crew is the right-wing equivalent of Lower East Side communists. “None of those guys are relevant,” says a prominent Republican consultant who asks not to be named. And MoveOn Executive Director Eli Pariser, who lurks on TheVanguard’s email list, says the operation looks too top-down to work on the Net: “TheVanguard folks are spending a lot of time thinking about what they want,” he notes, “and then figuring out how to spin it to their members.” Martin insists, though, that command and control will yield to collaboration once conservatives finally catch on. “It’s going to be a wonderful thing,” he insists, “and it’s going to be good for everybody.”

glenn reynolds
Republicans had a better machine using the last generation of new media such as direct mail and email, but I think they have been behind the curve on using the Internet for fundraising and campaigning. Until the Republicans get someone like Joe Trippi, someone who really understands the Internet, I don’t think they will change.

David All
We have nothing on the right that compares to MoveOn. The rnc has never called me. They don’t call any of the tech and politics crowd. They’re just going it alone, which is fine if you want to continue to be a failure. We’ve never needed the Internet before. When talk radio emerged in ’94, it was a very taboo thing, and it wasn’t until Newt Gingrich brought talk radio hosts into the Capitol that people started to engage talk radio. Now there’s an entire strategy focused on it. The White House has a talk radio person, the rnc does, and it’s seen as an effective medium. But the Internet—we haven’t needed to run around the mainstream media like we do now.

Joe Trippi
Real innovation is going to come from the dark-horse campaigns and the progressive campaigns. The establishment front-runner is not likely to do that.

grover norquist
americans for tax reform president
Getting people all exercised in writing naughty emails, naughty words, and sending them to congressmen may make you feel better, but does it change the world?

Peter Leyden
All the things that have been seen as liabilities to the Democrats—you can never get them to all agree, there’s diverse voices, everybody has something to say—in the new politics, this is completely the way it all works. There’s no question the progressive movement and the Democratic Party are much more strategically positioned to exploit the new environment. I think we’re in the beginning of another era of progressive politics.

crowdsourcing: relying on total strangers to do your most important work for free

going viral: spreading the word at the speed of bird flu

long tail of politics: read the book, but still not really sure

micropandering: throwing tiny bones to every segment of the population

mociology: the sociology of mobile-phone use

participatory politics: using elite white male bloggers and techies to get your message out

spokesblogger: a campaign’s official online message person, until her personal beliefs are uncovered

Michael Cornfield
There’s no doubt that right now the vigor in online political communication and especially online political mobilization is on the left. But does that mean that it’s gonna stay that way? No, it doesn’t.

floyd brown
citizens united
For years, the elites in Washington have used the Federal Election Commission as a tool to minimize citizen participation. The Internet is allowing people to bypass that control. It also lets you have almost instant advertising. The first political ad that I did cost over $100,000. Today, somebody with a little bit of technical skill could make a similar ad for almost free.

Outfoxed director Robert Greenwald has demonstrated the power of the netroots to fund and promote political documentaries on the left. Now David Bossie—the Whitewater in-vestigator fired for doctoring evidence to make the Clintons look bad—and ex-Clintonite Dick Morris are hoping to do the same for the right. The pair is using the conservative website Citizens United to raise funds for an anti-Hillary film to be released in theaters just before the primaries, with excerpts pushed out online. “We look at Hillary as the odds-on nominee,” Bossie says. “She’s the most dangerous and the most effective” of the Democratic contenders.

“To be perfectly honest, the way the numbers are looking, and the war, it’s going to be very difficult for a Republican to win, whoever the Democratic nominee is,” he adds. “That being said, I’ll do everything I can to make sure that doesn’t happen.”