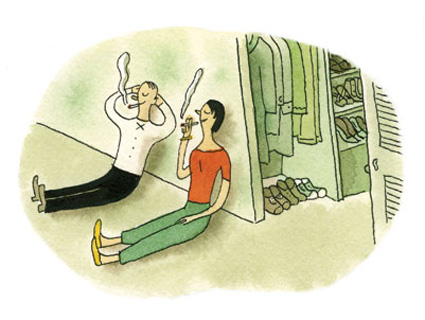 Since the 1970s, the average U.S. home has grown by 80%. Yet Americans face a “storage crisis,” according to ucla researchers.

The New York Times reports a surge in multiyear, multiunit renters, or what one self-storage company calls “a segment of the population that has truly embedded storage into its lifestyle.”

In 2006, Americans spent $7 billion on organizational products for their homes, closets, and garages.

80% of Americans believe they would be more satisfied if they were neater.

48% of office managers admit to a messy desk but claim to know where everything is. 12% have a neat desk but no idea where to find anything.

The Wall Street Journal reports that “bucket” is the new “in” business metaphor because it’s “more macho” than “basket.”

Container Store staff are trained to develop an “emotional connection” with customers. Says a salesperson, “When someone comes in to organize belts or shoes, there is usually a bigger problem.”

For her 1,000 pairs of shoes, Mariah Carey installed a revolving, climate-controlled, glass display case. “Closets are a big part of my life,” she told Hello! magazine.

Ashlee Simpson told People a 1,300-square-foot closet was the selling point of her house. LeBron James has a two-story closet. And Bob Costas paid $100,000 for a closet in the Time Warner Center.

To Have and to Hoard
Most commonly hoarded items:
mail
newspapers and magazines
containers
clothing
food
books
notes and lists
collectibles
broken and nonworking items
garbage

American women would rather organize their closets than lose weight, according to a 2005 Rubbermaid survey.

1 in 3 ikea customers say they get more satisfaction from cleaning out their closets than from having sex.

Men who don’t organize their sock drawer have sex 3 times more a month than men who do.

Men who own Palm Pilots are 4 times more likely to forget their wives’ birthdays than men who don’t.

The National Association of Professional Organizers claims that Americans spend 55 minutes a day looking for things they know they own but can’t find.

4 in 5 new homes have multicar garages. Most two-car garages have one or no car in them.

75% of L.A. garages are used in ways that preclude any parking.

Many upscale homes now feature a “transition room” or, as one woman told the New York Times, “the room where we will channel all our crap.”

After a Massachusetts family moved into a smaller home in 2005, the mother was “very depressed,” until they converted their den into a “Costco annex.”

According to Mental Health America, more than 2 million Americans are hoarders.

In 2003, a Bronx man spent two days trapped under his magazines—ranging from Vibe to the Harvard Business Review—before firefighters rescued him.

Many people have a bit of “pack rat” in them, says Harvard psychiatrist Michael Miller. “The impulse to gather and store has had evolutionary advantages.”

Last June 1,000 caged rats were found in a one-bedroom house in Petaluma, California. An animal control officer said their owner was “an intelligent man to talk to, but he smells like rat urine.”

In 2005, a 12-year-old Long Island girl was accused of strangling her mother after being told to clean her room. Her attorney claimed self-defense.

90% of parents say that their kids’ rooms are causing “mess distress.”

Last year, more than 6,000 people went to the E.R. with backpack-related injuries.

A recent study found that college conservatives’ rooms are more neat and organized than liberals’.

The U.S. produces 40% of the world’s new stored information.

Each American produces 800 megabytes of digital data a year, the equivalent of 30 feet of books.

The CIA burns up to 10 tons of documents per day.

The director of the National Association for Information Destruction says paper shredders are becoming “a household requirement as much as a washer and dryer.”

A Kansas salt mine is home to the world’s largest film collection, and, until recently, 400 versions of the Good Book owned by the American Bible Society.

The Mormon Church advises its members to keep a year’s worth of rations because “It may someday be as important to store food as it was for Noah and his family to board the ark.”

The average American fridge is twice as big as its European counterpart.

More than 70% of Americans are routinely unable to find matching lids for their 15-plus food-storage containers.

Sealed for Freshness, an off-Broadway play that opened in February, is about a Tupperware party “gone awry” and “lost youth, missed opportunities, and deviled egg containers.”

The San Diego Zoo’s “Frozen Zoo” has semen, embryos, and dna samples from 675 species, half of them endangered.

For $110 a year, Clone usa will store your pet’s semen—provided you collect it yourself.

Sources on next page

Neat freaks: Ajilon Office study, 2005, “What Does Your Desk Say About You?”

Bucket vs. basket: “Business Types Get a New Kick Out of the ‘Bucket,” Christopher Rhoads, Wall Street Journal, March 27, 2007.

College rooms: “The Secret Lives of Liberals and Conservatives: Personality Profiles, Interaction Styles, and the Things They Leave Behind,” Harvard University, Department of Psychology.

Digitally stored information: “How Much Information? 2003,” UC Berkeley’s School of Information and Management and Systems.

Mormon hoarding: The Church of Jesus Christ of Latter-Day Saints, “All Is Safely Gathered In“; “Basic Food Storage: Where Do I Start?,” Brigham Young University Broadcasting.