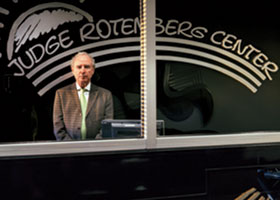 In Massachusetts, Matthew Israel’s critics have been trying to put him out of business for more than two decades. The first major battle took place in 1985—before Israel even started using shocks—after a 22-year-old student named Vincent Milletich died while in restraints at one of Israel’s homes. The state Office for Children tried to close down Israel’s facility, but he fought back with a lawsuit and a PR blitz. (For example, much as he does with journalists today, Israel showed videos of his methods to pioneering behaviorist B.F. Skinner, who was famously opposed to the use of painful punishments known as “aversives.” Skinner then issued a statement saying that such extreme patients might require aversive therapy.) In the end, Judge Ernest Rotenberg, for whom the facility is now named, decreed that the program could stay open, though Israel would have to obtain court approval every time he wanted to use aversive therapy on a student.

In the mid-1990s, Massachusetts again tried to close down Israel’s program—which by then had started to use electric shocks—and again he prevailed. This time, a judge declared that the state Department of Mental Retardation had waged a “war of harassment” against Israel, accused its commissioner of lying on the witness stand, stripped the agency of its power to regulate Israel’s facility, and ordered the state to pay the $1.5 million in legal fees and other costs that Israel had racked up. The commissioner was forced to resign, a cautionary tale for any other state official thinking of taking on Israel.

Meanwhile, a parallel battle over Israel’s use of aversives has been fought in the Massachusetts state Legislature. Since the late 1980s, a bill to ban their use has been introduced in every legislative session—and every time it has failed to become law. Emotional hearings on the pros and cons of aversives have become a regular ritual. Critics (professors, disability activists, mental-health experts) testify against the use of aversive therapy, while parents plead with lawmakers not to pass the bill, insisting that without aversives their children’s self-abusive behavior will escalate.

In this battle, Israel has the perfect ally: state Rep. Jeffrey Sanchez, whose nephew Brandon has been in Israel’s care since age 12; Brandon, now 27, is one of Israel’s most challenging cases, with a long record of extremely self-injurious behavior. This is the same Brandon who Israel once shocked more than 5,000 times, prompting him to make a new device that could deliver much more pain. Nevertheless, Brandon’s parents credit Israel with saving their son’s life, and his uncle has helped ensure that no bill banning aversives becomes law.

So in a bird-in-hand strategy, state Senator Brian A. Joyce, whose district includes the Rotenberg Center, has introduced two new bills that—while not proposing an outright ban on aversives—would regulate their use much more strictly. “The harsh reality is we’re doing this to innocent children in Canton, Massachusetts,” he says. “If this treatment were used on terrorist prisoners in Guantanamo Bay, there would be worldwide outrage.”