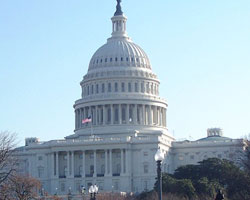 Since the dawn of the nation, citizens of the District of Columbia have lacked congressional representation, a fact D.C. motorists silently protest each day with license plates that bear the slogan “Taxation Without Representation.” But that could soon change, depending on the outcome of tomorrow’s key Senate vote on the District of Columbia House Voting Rights Act of 2007. If Democrats can muster the 60 votes needed to shut down debate and move to an up-or-down vote, the bill’s most significant hurdle will be passed and D.C. residents will likely be a presidential signature away from their first real representation.

The legislation, which passed the House in the spring, is effectively a compromise. It gives D.C. a voting representative (as opposed to the current non-voting delegate) and, as a concession to Republicans, it gives Utah another congressional seat, using the logic that Utah deserves an additional representative due to its 2000 census figures. Adding a seat in very blue D.C. and another in very red Utah guarantees the balance of power in Congress does not shift.

Granting representation to a population of U.S. taxpayers larger than Wyoming’s—and one heavily composed of government workers—would seem a fairly innocuous issue, yet it has been staunchly opposed by members of the GOP caucus. Lately, Senate minority leader Mitch McConnell has been aggressively working to organize opposition to the bill. “McConnell has been withering in the pressure he has brought on his own people,” says Eleanor Holmes Norton, the District’s non-voting delegate in the House and a likely pick to be the District’s congresswoman should the bill become law.

The explanation McConnell and other GOP members give publicly for their opposition is that Article I of the Constitution reserves representation in Congress for the “people of the several states.” The District, they argue, simply does not qualify. However, supporters of giving D.C. congressional representation point to numerous constitutional examples of the District being treated like a state. In particular, they cite the Commerce Clause of the Constitution, which grants Congress the authority to regulate commerce “among the several states,” and the fact that Congress has always regulated commerce in and out of D.C. Further, the 16th Amendment gives Congress the power to levy an income tax on the citizens of the “several states.” Citizens of the District have always paid, and in fact pay some of the highest per capita taxes of any citizens in the country.

Supporters of the bill also point out that a certain kind of soft paternalism allows Congress to feel they know what is best for a community that is largely poor and black. “I think the fact that this is a majority-Black city plays a role,” says Ilir Zherka, Executive Director of D.C. Vote, a non-profit working for D.C. representation. “For some people, race and culture and political party get all bunched together.” (Senator McConnell’s office did not return several phone calls.) In a recent Washington Times op-ed two prominent black Republicans, former Oklahoma Congressman J.C. Watts and former Maryland Lt. Governor Michael Steele, called on their fellow Republicans to support the bill, explicitly tying the issue to the civil rights struggle.

Whatever the reason for the opposition, it has kept D.C. residents battling for representation for years. They only received the right to vote in presidential elections in the 1960s, when the enthusiasm for civil rights led to the passing of the 23rd Amendment. In 1971, the District received its non-voting delegate. Later that decade, a Democratically controlled Congress passed a constitutional amendment giving D.C. a house seat and two senators. In the end, though, only a handful of states ratified, scuttling the effort.

And since that time, there has been virtually no movement on the issue. Thirty years have come and gone and the closest the District of Columbia has come to voting representation in Congress was a statehood movement in the ’80s and ’90s that did little more than prove that the American public wasn’t ready for a 51st state. But things are different now. Democrats control both houses of Congress, the movement on behalf of the District is pushing for representation instead of statehood, and the additional congressional seat for Utah acts as an enticement to reluctant GOP members.

Even so, Republicans’ resistance could pose a serious challenge to the bill’s passage. As it stands, their gripe with the legislation goes well beyond the stated constitutional objections. Among other things, Congress has always enjoyed exercising full authority over the District and using it as a proving ground for new federal programs. A few years back, for example, Congress made the District the first place in the nation to give federal money to private schools through a voucher program. More recently, Senator Sam Brownback of Kansas floated the idea of a flat tax in the District, even though the heavily Democratic city would likely oppose such an idea.

But more than losing D.C. as a proving ground for free market experiments, the GOP fears that giving the District representation could eventually disrupt the balance of power in the Senate. “McConnell and others are trying to fight the endgame here,” says Zherka. “In their view, if this bill passes, we will be in a stronger position to fight for Senate representation.”

For all the opposition, the bill still has a shot of passing, according to supporters of the legislation, who believe they have the votes necessary to get the bill to the president’s desk. “We expect to prevail in the Senate because we have a healthy majority,” says Norton, adding that there is enough Senate support to get past a filibuster attempt orchestrated by McConnell.

But, should the bill pass, it’s unlikely that there will be enough votes to override a presidential veto—and, as the White House has previously hinted, a veto is a distinct possibility. Supporters are holding out hope that their Republican allies in Congress—among them Utah Senator Orrin Hatch, a cosponsor of the legislation—can convince the White House to sign the bill into law. “This president would have a lot of nerve vetoing this bill, which would deny a vote to residents of the District of Columbia now fighting in Iraq as I speak,” says Norton.