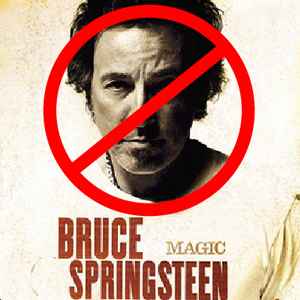 Blogs are atwitter with the news that Clear Channel radio, famous for issuing company wide no-play edicts, has apparently issued another. But this time it’s against The Boss, and that’s even got Fox News upset:

Bruce Springsteen should be very happy. He has the No. 1 album, a possible Grammy for Best Album of the Year for “Magic,” an album full of singles and a sold-out concert tour. Alas, there’s a hitch: Radio will not play “Magic.” In fact, sources tell me that Clear Channel has sent an edict to its classic rock stations not to play tracks from “Magic.” But it’s OK to play old Springsteen tracks such as “Dancing in the Dark,” “Born to Run” and “Born in the USA.”

While Bruce’s left-leaning politics bring up memories of the recent blacklisting of the Dixie Chicks, I’m not entirely sure about this. First of all, “sources” say the memo was sent out to classic rock stations, which by definition are stations that play old music. We don’t really have a classic rock station in San Francisco, but a quick look at San Diego’s 101 KGB, “The Classic Rock Experience,” shows their most played songs are “Ballroom Blitz,” “White Room,” “Rock & Roll All Night,” and “Good Times Roll.” Not even the rockingest of current rock jams are breaking through into the classic rock pantheon, to say nothing of stuff that sounds a lot like the Magnetic Fields. Clear Channel are probably reminding programmers that just because a standard classic rock artist has new songs, that doesn’t mean they fit on the playlist.

This is of course not to defend radio, which at this point is kind of like a nearly deserted mall in a depressed Midwestern suburb: the last remaining stores are mostly selling trash. However, the Fox News article is mistaken on one point: it says tracks from Magic are “not being played on any radio stations, according to Radio & Records, which monitors such things. Nothing.” Not true: in fact, “Radio Nowhere” is down from #2 to #3 this week on the Triple A National Airplay chart at Radio & Records, just behind Snow Patrol and KT Tunstall, and just ahead of Spoon. Triple-A radio’s snowy-white “adult” brand usually annoys me, but that’s not a bad Top 4, and people worried about Bruce not getting airplay should just change the station.