Say you’re the LA Weekly, and you like the Coachella music festival a lot, and you want to throw a slightly smaller, edgier version of the multi-stage concert. Where could you have it that’s even more deserted than a polo field in the middle of nowhere? Why, downtown Los Angeles on a weekend, of course. And so, Saturday saw the streets around LA’s City Hall fill with hipsters and music, and me with a camera.

First, I stumbled across the Bay Area’s Scissors for Lefty, who seem to have painted themselves gold for the occasion. It’s still pretty early in the afternoon and with the crowds still a bit thin, that seems like a lot of effort. But the band are putting just as much energy into their performance, and like a quirkier, buzzier Strokes, they’re livening up the early arrivals.

Over at the main stage, Chicago’s Cool Kids are testing the limits of the sound system with some bass-heavy ’80s-inflected beats. With their cardigans and Beastie Boys references, they’re not only a throwback to a kinder, gentler era of hip-hop, but perhaps approach a new level of MIA-style cultural (re-) appropriation. Who knows. Either way, the duo are themselves evidencing a new fashion trend: the return of day-glo. Everywhere I turn, kids are wearing fluorescent-colored sunglasses, pink and yellow baseball caps, a traffic-cone-orange dress. If only I’d kept my pink Culture Club T-shirt…

Sweden’s Shout Out Louds are doing anything but over at the side stage; when the bassist grabs castanets, you have no problem hearing them. Their bright, upbeat tunes are tempered by lead singer Adan Olenius, whose Robert Smith-style laments over lost love start to seem a little too self-indulgent, and I begin to sympathize with whoever dumped him. But “The Comeback,” off their 2005 album Howl Howl Gaff Gaff, is a great tune, even if it’s lamenting lost love.

I hear Mexican disco-punkers Kinky make a noisy entrance down the street, but I’m sticking around for Autolux (right). With the stage standing right next to the Morphosis-designed CalTrans building, it’s an unlikely opportunity to see two of LA’s great modernist projects at the same time, and the band acknowledge this by dedicating a song to the structure. But most of the time they stick to the music, and while the guitar fuzz brings easy comparison’s to My Bloody Valentine, the ‘Lux seem more interested in bending and twisting the notes than flooding them in distortion. It’s an experimental set, even for them, and they seem off their game a little. 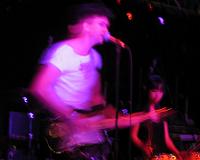 Perry Farrell is helping his new band, Satellite Party, cover Jane’s Addiction songs over on the main stage, but I’m on my way to see The Raveonettes (left), who end up being my heroes of the festival. Stuck on the smallest stage, and in front of a minuscule but enthusiastic crowd, the Danish duo (accompanied by a tom-and-snare drummer) knock every song out of the park. Their reverb-y rock is definitely retro, but like the White Stripes, they use the restrictive palette and genre conventions to great effect, and songs like “That Great Love Sound” reach a kind of epic grandeur. The crowd, such as it is, goes nuts.

Swedish big-beat combo Teddybears are super late arriving on the main stage, but this is where everybody is, and when the band emerge in their bear heads, the cheers are deafening. “Different Sound” and “Cobrastyle,” with their reggae-style toasting, are crowd-pleasers, but the drummer seems to be having trouble keeping time with the drum machine, and besides, Justice are about to start on the side stage. 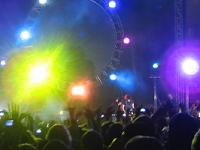 It’s the biggest crowd of the day for the French techno duo, but that’s still not saying much; there’s probably only a couple thousand people here at best. But with glowsticks at the ready, there’s a kind of techno fever sweeping the crowd, and as the lights go down, people are rushing madly towards the stage, screaming how much they love Justice. Weird. The duo open their DJ set with the fanfare from “Also Sprach Zarathustra,” blending it into their bass-heavy hit “Let There Be Light,” and people are dancing with such abandon I’m being knocked off my feet. But when the set swerves into cheeky references to early rave music, the crowd seems underwhelmed. Los Angeles experienced the excesses of rave culture a little more intensely than Paris, I think, and a track like “Short D*** Man” (that in France might be considered a “lost classic”) is just played out in LA. But people stick around, and cheer the set’s every transition.

Sadly, prior DJ commitments pulled me away from Detour before Bloc Party‘s headlining set, but as I walked back to my hotel, brief echoes of their music would bounce off the buildings and find me. People were lined up for some fancy club, a taco stand was doing brisk business, and the air, a comfy 70-ish degrees as always, was sweet with the promise of another Saturday night in LA.