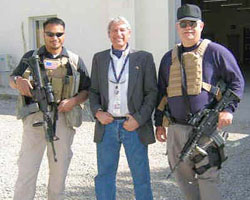 Howard “Cookie” Krongard hasn’t failed at much in life. Until recently, in fact, you would have thought him an unqualified success, a well-bred man who came from plenty and went on to plenty more. His resume is the definition of East Coast privilege: Princeton, Harvard, Cambridge, All-American lacrosse player, and successful corporate attorney. So, it must have been with some bewilderment that he found himself sitting before the House Committee on Oversight and Government Reform earlier today, facing charges of corruption, mismanagement, and incompetence in his latest station in life as the State Department’s Inspector General. In his performance there, Krongard displayed a penchant for protecting political allies while obstructing investigations—and today, he may have committed perjury.

Krongard, a silver-haired man in his late sixties, fidgeted in his suit as committee Chairman Henry Waxman (D-Calif.) listed the accusations, many of which originated in congressional interviews with Krongard’s State Department deputies. As alleged in a 41-page report released today and distributed to journalists at the hearing, Krongard stands accused of inadequate oversight of construction contractors at the new, $600-million U.S. Embassy in Baghdad; refusing to pursue procurement fraud charges in a case related to a DynCorp contract; intervening in an ongoing investigation of former Broadcasting Board of Governors Chairman Kenneth Tomlinson; questionable auditing of State Department financial statements; and an “abusive management style” that has contributed to an almost wholesale revolt against him by his own staff.

But perhaps the most serious charge relates to a subject that has become a continuing headache for the State Department: Blackwater. According to Waxman’s report, Ronald Militana, a special agent for investigations in Krongard’s office, launched an inquiry last March into allegations that Blackwater had smuggled weapons into Iraq. (The weapons ultimately wound up in the hands of the PKK, a Kurdish separatist group in southeastern Turkey and a U.S.-designated “foreign terrorist organization.”) Militana interviewed State Department officials and a Blackwater attorney, and briefed an assistant U.S. attorney on the details of the case in preparation for a criminal prosecution. In June, with the initial legwork complete, Militana’s boss, John DeDona, sent an email to Krongard, updating him on the status of the case. Krongard’s cryptic response: “Please do not treat anything in the email below as having been seen by me, advised by me, or understood or approved by me. If there’s something significant in the message below, please come and tell me about it.”

Two weeks later, Militana, by then working in conjunction with Justice Department attorneys in North Carolina, put in a request for copies of Blackwater’s State Department contracts and related documents. When Krongard learned of this, he immediately demanded a meeting and directed investigators “not to proceed in any manner until the briefing takes place.” Militana was forced to cancel an appointment with a State Department official at which he expected to receive copies of the Blackwater contracts.

Justice Department officials traveled to Washington in late July, where they met with Krongard and Terry Heide, a congressional and media relations director in the Inspector General’s office. They asked that Heide be excused from the meeting, as she was not involved in the investigation, but Krongard insisted that she remain, referring to her as his “alter ego.” According to the sworn testimony of one of the Justice Department lawyers, Krongard “indicated his strong concerns about the participation of multiple agencies [in the Blackwater inquiry] and the potential impact of the investigation on the Department of State’s efforts in connection with the war in Iraq.” He went on to say that the lawyers were “wasting his time.” The Justice Department officials ultimately convinced Krongard to allow Militana to continue working with them, but the Inspector General imposed a condition: Heide, his lieutenant, was to be looped in. As she later explained, she believed her role was to maintain “situational awareness” of the investigation on Krongard’s behalf.

Heide’s participation slowed the investigators’ progress. At Krongard’s direction, she became a choke point in their requests for documents. According to one Justice Department attorney cited in Waxman’s report, “We have become obliged to engage in a cumbersome and time-consuming investigative process that relies primarily on communications with State officials, rather than the investigative efforts of IG agents…. For reasons that remain unclear, the line IG agents… have been forced to funnel requests within their own agency through a congressional and public relations official. This is not the usual practice.” As of last week, Justice Department lawyers had still not received documents relevant to their investigation of Blackwater.

So, should we chalk this up to interagency rivalry and bureaucratic incompetence? Perhaps. But according to Waxman and congressional Democrats, Krongard’s interference was more calculated than that. As it turns out, his brother—A.B. “Buzzy” Krongard—may have played a part. Until his resignation in 2004, Buzzy was the executive director of the CIA, where, in 2002, he reportedly facilitated Blackwater’s first “black” contract—a $5.4 million deal for covert services in Afghanistan.

During his opening statement at this morning’s hearing, Krongard strayed from his prepared remarks to deny his brother’s association with Blackwater. “To put it finely, I am not aware of any financial interest or position he has with respect to Blackwater,” he said. “It couldn’t possibly have affected anything I’ve done, because I don’t believe it…. I have specifically asked him. I do not believe it’s true that he is a member of [Blackwater’s] advisory board.”

Krongard’s statement put into motion a carefully staged ambush by congressional Democrats led by Rep. Elijah Cummings (D-Md.). As staffers distributed copies to reporters, Cummings produced a pair of letters from Blackwater CEO and founder Erik Prince to Buzzy Krongard. The first was an invitation, dated July 26, for Buzzy to join the firm’s advisory board. “Your experience and insight would be ideal to help our team determine where we are and where we are going,” it read. Cummings then confronted him with an email, sent September 5, in which Prince thanked Buzzy “for accepting to be a member of the Blackwater Worldwide Advisory Board” and invited him to attend a meeting, which was held in Williamsburg, Virginia, earlier this week. Buzzy was to be flown there on a Blackwater plane, put up in a hotel, and receive a $3,500 honorarium for his time. If that weren’t enough, Cummings said that congressional investigators had called the hotel this morning and confirmed Buzzy’s attendance.

Faced with evidence of his brother’s close ties to Blackwater, Krongard stuck to his story, saying that Buzzy “has been involved in a lot of activities involving security, so it’s no surprise that someone like Prince would invite him to continue to support security, peace, and freedom.” Apparently ignoring the letter of acceptance, Krongard continued, “There is nothing in here that suggests that my brother accepted this July 26 invitation…. As far as I know, he did not.”

According to Waxman’s report, Krongard started intervening with the Blackwater investigation before the invitation was extended to his brother. But what seemed so suspicious was his continued denial of Buzzy’s Blackwater connections. Tough questioning continued until Waxman adjourned the meeting to allow fellow members of the committee to vote. After the break, Krongard changed his story. He said he’d called his brother, reaching him at home. Though Krongard had testified that he’d specifically asked Buzzy about the Blackwater matter in early October, during this more recent conversation, he said, his brother acknowledged that he was a member of the company’s advisory board and had attended the meeting yesterday. Krongard then recused himself from “any matters having to do with Blackwater.” Asked about the suspicious timing of his change in testimony by Rep. Stephen Lynch (D-Mass.), Krongard responded, “I’m not my brother’s keeper.” Apparently Buzzy feels the same way. After the hearing, he told TPM Muckraker‘s Spencer Ackerman that he’d informed Krongard three weeks ago of his decision to join Blackwater’s advisory board. If true, and Krongard knowingly lied to Congress under oath, his troubles may be just beginning.