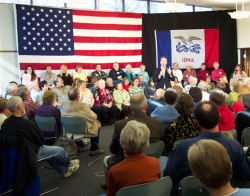 MARSHALLTOWN, Iowa – In John Edwards’ America, no issue matters so much as the fight between you and the system.

Speaking this weekend to a crowd of roughly 150 mostly elderly Iowans in the Charles City (pop. 7,812) town library, Edwards tied every one of the Democrats’ bread and butter issues to a singular idea—”This system is corrupt. And it’s rigged. And it’s rigged against you.”

“There are huge issues facing America,” the former senator said, standing in front of a massive American flag and a smaller Iowa state flag. “We have a dysfunctional health care system, desperately needs reform. We have huge issues with social security. The prescription drug law under Medicare. We’ve got issues with protecting our planet from global warming. Extraordinary economic inequality.” Here he pauses, then speaks slowly, his southern drawl becoming more pronounced with each syllable. “But whatever the positions of the candidates on these issues, I want to make it very clear where I stand. I don’t think we can change these things unless we do something to change this system.”

In packaging his stump speech this way, Edwards passes on the opportunity to feed his audiences the red meat that conventional wisdom and the polls suggest they want. He doesn’t discuss Iraq for longer than a few sentences. He hits the Bush administration for its warmongering on Iran, but only as an addendum.

He doesn’t even describe the details of his universal health insurance plan. Instead, standing in jeans and a blue sport coat, he asks attendees why they think America doesn’t already have such a plan. “Drug companies, insurance companies, and their lobbyists in Washington DC,” he says. “It’s that simple. Really.”

Every other ill is tied to the system as well. The prescription drug law, Blackwater, crippling student loans, social security, the pathetic rebuilding of New Orleans—”nothing will happen until we change this corrupt system.”

The system isn’t George Bush’s doing, so a change-the-party solution won’t suffice. At each stop, Edwards repeats, “Do you really believe that if we replace a crowd of corporate Republicans with a crowd of corporate Democrats that anything meaningful is going to change?”

And by corporate Democrat, he means only one of his rivals.

That’s the dominant angle of attack Edwards uses on the Democratic frontrunner, who’s recent stumbles perhaps emboldens him to continue on the offensive. It isn’t the attack du jour—that Clinton equivocates and speaks out of both sides of her mouth, the latest example coming in last week’s debate when she voiced approval for a plan for driver’s licenses for illegal immigrants, only to pivot moments later when she said she doesn’t support such a plan. Though his campaign released a video attacking Clinton for what it called “The Politics of Parsing,” Edwards uttered only one sentence on the incident in his three events Saturday—”You can’t answer a yes or no question, yes and no.” Instead, the attack is that Clinton is complicit in a “rotten” system.

The charge is a legitimate one. According to opensecrets.org only $20 of the more than $30 million Edwards has raised has come from Political Action Committees (PACs), and lobbyists, as an industry, aren’t in the top 20 industries donating to his campaign. On the other hand, Clinton has received roughly $750,000 from PACs and more than $500,000 from lobbyists. But the charge is also an inevitable one. There is so little that distinguishes the leading Democratic candidates on the issues that attacks on political maneuvering are the only attacks possible. All three, Edwards, Clinton, and Barack Obama, support universal health care, comprehensive immigration reform that includes a path to citizenship, rebuilding America’s reputation overseas, and ending the war in Iraq. The struggle to convince voters that, when all candidates more or less present the same platform, they ought not go with the one with the most experience, requires a campaign that bemoans politics as usual and chides those who perpetuate it.

This rhetoric also makes it feel like Edwards is playing doubles with Obama. The senator from Illinois is famously running a campaign that indicts the system in Washington. Though Obama decries partisanship far more frequently than Edwards, he has said repeatedly that Americans feel politics is an “insiders’ game.” He wants to “challenge the status quo and get results.” It is a different message than Edwards’ on the margins, but is substantially similar.

On his Saturday stops, the third at the University of Northern Iowa, Edwards spoke charitably of Obama, echoing his message of hope. “You have the ability to help create change,” he tells his audiences. Edwards poses the “great moral test of our generation” this way: “Will we get the power in this democracy out of the hands of the few, and the rich, and the powerful, and will we put it back your hands?” Yes, he says. “We can do it.”