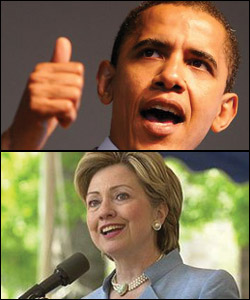 Hillary Clinton’s campaign stops are tightly-scripted affairs, more professionally run and grander in their pageantry (and, often, attendance) than those of any other candidate in the Democratic field. They are, in a word, presidential, and seem designed to project that image to voters. Indeed, as Clinton makes a campaign swing through Iowa this week, voters planning to caucus for her on January 3 say they are drawn to one specific aspect of her candidacy: her electability. Clinton is banking on such pragmatism—as opposed to her competitors who are pushing the passion button.

Outside a biodiesel plant in the small city of Newton, where throngs of Clinton supporters and media gathered for a Clinton speech on Tuesday, an undecided voter named Patrick Van Nice said that he’s looking for the candidate who most reflects his views—in his case, the “greenest” candidate—but added that he is seriously considering Clinton because “the other thing is electability. If they’re not going to win, or don’t have a really strong chance of winning, why bother?”

Similarly, Laura Noyce Engel, a homemaker, said that she sometimes has a hard time seeing where Senator Clinton “is on the issues,” but that she may support the former First Lady anyway because the single most important question is, “Who’s is going to beat whatever Republican who is going to win their nomination?”

“I think it’s high time to get a Democrat in the presidency,” Engel added.

It was a refrain echoed by many at the two Clinton events I attended this week. For Democrats looking for a sure thing, Clinton is as close as they’re going to get. In a recent Washington Post/ABC News poll, 62 percent of Democrats said the candidate who “has the best chance of getting elected president in November 2008” is Clinton. Only 15 and 14 percent, respectively, said the same of Barack Obama and John Edwards. Perhaps the Democrats—with help from the Clinton campaign and the media—are creating a self-fulfilling prophecy: the more electable Clinton seems, the more electable she becomes.

Electability is part of the official campaign pitch, too. Former Iowa governor Tom Vilsack, who has endorsed Clinton and is campaigning with her in his home state, told me before the event in Newton that Clinton stands apart from the rest of the Democratic field because of her experience in the White House, her personal relationships with dozens of world leaders, and her willingness to, in his words, “challenge Americans.” But when pressed to identify how she differs substantively from the rest of the Democratic candidates, Vilsack pointed to minor differences on health care and then said, “The reality is, we gotta get somebody who can get elected. We gotta get somebody who is tough enough to run in a race that is going to be a tough race.” He added, “She is tough. She’s been through this process and she knows how tough it can be.”

If nothing else, Clinton is seasoned in the ways of political campaigning, having been through several of her husband’s campaigns, and a couple of her own. On Tuesday, her well-oiled campaign machine was on display in Newton and at a second stop in Amana, where she addressed supporters in a barn decorated with several American flags and a ring of hay bales framing the stage. Always disciplined and relentlessly on message, Clinton delivered speeches that were calm, smooth, and polished without seeming robotic. Everything is committed to memory—no notes, no digressions, no cheap one-liners. Even her campaign staffers look more professional than their counterparts on rival campaigns, and seem to exude the confidence of future White House staffers.

The pragmatism of the Clinton campaign and of the senator’s supporters poses a stark contrast to what drives the campaigns of other presidential hopefuls, notably Barack Obama, whom I followed Wednesday as he stumped through Iowa towns from morning until evening. Obama’s events are not as highly choreographed as Clinton’s, but they’re always high-energy, as he feeds off of the energy of his supporters and they off of his. If their post-event comments are any indication, Obama supporters aren’t yearning for electability. They’re there for the candidate.

Unlike at Clinton’s events, where roughly half the attendees I spoke with were on the fence, every person I spoke with at Obama events were fervent supporters. They were eager to tell me how strong their support was (very strong, many emphasized) and about how long they’ve supported him. “I’ve been with him since day one,” one told me proudly.

And when faced with questions about why they support the Illinois senator, Obama devotees literally trip over themselves in an effort to describe his appeal.

“I think he’s the one that can bring everybody together,” said Cindy Green, who attended an event in a gymnasium in the city of Muscatine, where Obama campaigned under basketball hoops and a giant, handmade sign. “I’m tired of Republicans versus Democrats. He’s the one I see that can bring everybody together, work with people, to make a better world, not just a better United States.”

Sally Meisinger said she supported Obama because, “He’s going to bring change to this country.”

“Change on the issues?” I asked.

“Change for the better,” she said.

“Change to the system?”

“I think overall change,” she responded. “Change in how we think about ourselves, change in how we treat each other and the world, and how the world is going to see us, and just change in every way possible.” She paused. “I pray and hope that he has enough support to win in Iowa.”

Obama’s ability to inspire in this way gives him the opportunity to reach people who traditionally don’t participate in politics. Repeatedly, over the course of three Obama campaign stops, I met individuals who said they were planning to caucus for the first time. There were black men in their twenties, single mothers, and high-school and college students, all of whom declared they’d found their way into politics for the first time through the Obama campaign. I even met a few die-hard Obama supporters who had previously been staunch Republicans.

Angela McGee, an attendee at the gymnasium event in Muscatine, tried to herd four small children while she explained that she’s supporting Obama because she likes “his personality and his thoughts on health care.” Asked if she considered any other candidates, she said, “No, I’m just really, really stuck on Obama.” Then she volunteered, with visible pride, “This is actually the first time I’ve ever voted before. I’ve never been involved in politics before. I’m doing it for Obama.”

David Camp insisted that, though he had been a Republican for 55 years, and still considered himself one, he could reconcile his abundant enthusiasm for Obama because “he’s the closest thing to what a true Republican is.” Standing on a dock overlooking the Mississippi River in the southeastern town of Burlington after Obama’s had addressed supporters, I asked Camp to describe a true Republican. He described someone who bore very little resemblance to Obama. It didn’t seem to matter. Asked if he would caucus for Obama, he said, “You bet. The last time I was this excited for a candidate, it was Barry Goldwater.”

Afterwards, I caught a young black man—a rarity in Iowa—on his way out of the building. “I’m fired up, baby. I’m ready to go,” said Tracy McCampbell, with a huge smile. “I’m caucusing, man. First time! I was one of those people who was sucked into thinking, ‘One vote doesn’t make a difference, blah blah blah.’ But I’ve changed my mind now, man. I’m ready to go.”