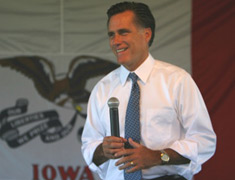 Mitt Romney has flip-flopped on so many of the major issues in today’s politics, it’s clear that his behavior isn’t a series of changes-of-heart. It’s a fundamental willingness to do and say anything to be president. So maybe it’s not surprising that Romney is waffling in small but important ways on his own religion. Nevertheless, some Mormons are pissed.

Here’s why Romney has drawn their ire, according to Josh Patashnik in TNR.

(1) In a TV interview, Romney disputed the claim that Mormonism differs from evangelical Christianity by believing that Jesus will return to America instead of the Middle East. Romney said that “the Messiah will come to Jerusalem… It’s the same as the other Christian tradition.” Except it’s not. Mormons do believe Jesus will return to the Middle East, but they also believe that Jesus will establish a new Jerusalem in Jackson County, Missouri. From Jackson County, Jesus will rule for 1,000 years. That’s a fairly significant period of time for Romney sweep under the rug.

(2) In a Newsweek interview, Romney attempted to downplay the significance of baptism for the dead, a fundamental Mormon practice that allows the deceased to enter heaven.

(3) On the campaign trail, Romney refers to Jesus as his “personal savior,” in the habit of the protestant evangelicals he is attempting to woo. Mormons don’t use the phrase “both because it implies a born-again experience not central to Mormonism and because church doctrine, like Catholicism but unlike evangelical Protestantism, maintains that faith in Christ must be matched with good works in order to attain salvation,” according to Patashnik.

(4) Romney has said, “I can’t imagine anything more awful than polygamy.” Mormons recognize that polygamy is part of their history and usually treat it with more sensitivity.

And then there’s the Mormons who just plain don’t like Romney’s pandering to the members of the Religious Right who for so long have tried to ostracize and demonize Mormons. Take this man, for example:

“I understand he has to appeal to them for political purposes, but it makes me, as a Mormon, feel very, very queasy to see him doing it,” says Greg Kearney, a computer programmer in Casper, Wyoming. “These people hate us, and they are so vitriolic–they think they get to decide who’s Christian. I don’t know if it’s worth it.”

It’s tough being a man with no driving force other than his own ambition, ain’t it?