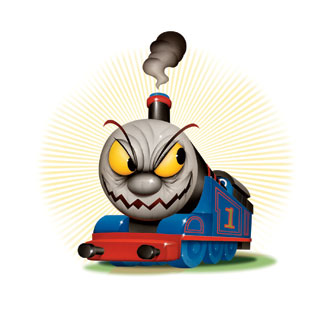 late one afternoon in October 2006, Carolyn and Ghassan Daher took their five-year-old son Brayden to a party near Seattle. Kids got goody bags filled with toys and candy; a favorite were the yo-yo water balls, liquid-filled spheres attached to long, stretchy cords. Brayden and his friends hit the kiddie dance floor, swinging the balls over their heads like lassos. Suddenly Brayden came running to his mother, clutching his neck. “His eyes were watering and bloodshot, and I couldn’t see anything because the string was clear,” Carolyn recalls. “I couldn’t see it was around his neck. The ball was pulling down—it was like a rock with flashing colors.” After what seemed like an eternity, she was finally able to break the cord. Brayden suffered no permanent injuries.

But Carolyn was shaken, and when she got home she searched the Internet for information on yo-yo balls. She found that (like most toys in the United States) they are typically imported from China or Taiwan, and that (also like most toys) they have never been tested for safety by the U.S. government. She read about Lisa Lipin, an Illinois mother whose son had nearly been strangled by a yo-yo ball in July 2003. Lipin begged the federal Consumer Product Safety Commission (cpsc) to follow the lead of France, Canada, the United Kingdom, and Australia, and ban the balls. “But they just wanted me to go away,” she says. In September of that year, despite close to 200 near-deadly incidents, the cpsc stated that the balls posed “a low risk of strangulation.” The agency’s chairman, Harold “Hal” Stratton, even told Good Morning America that he’d forbidden his own children from playing with the balls—but would not take them off the market. By late 2006, the agency had reports on 416 incidents involving yo-yo balls; 290 of them were classified as strangulation/suffocation.

Ever since Illinois-based rc2 Corp. recalled 1.5 million Thomas the Tank Engine trains in June after they were found to be coated in lead paint, the headlines have been full of reports on the dangers of Chinese imports—lead paint on Dora the Explorer and Sesame Street toys, Barbies with small magnets that came loose, Playskool sippy cups whose spouts broke off, causing toddlers to choke. Most of the stories have focused on the lack of manufacturer oversight in China. But the root of the problem is closer to home: The cpsc, created to prevent hazardous products from winding up in American homes, has been gutted by decades of manufacturer lobbying and White House interference—and the Bush administration has finally paralyzed it to the point that it can barely function. “What’s going on there is not benign neglect,” says Ann Brown, cpsc chairman under President Clinton. “It’s the systematic dismantling of the agency.”

the cpsc was created in 1972 with a broad range of powers. It could impose mandatory safety standards, ban or recall products found to be unsafe and dangerous, and levy fines on companies that hid safety information. Its job was to keep tabs on more than 15,000 types of consumer goods—just about everything you’d find in a Wal-Mart except food and drugs. By 1979, it had a budget of $44 million and a staff of nearly 900, whose investigations resulted in 545 recalls that year alone.

Then came the Reagan administration. Within months of taking office, Reagan convinced Congress to pass legislation that crippled the commission: Before it could impose mandatory standards on any product, it had to wait for industry to write its own standards, and then prove that they had failed. Recalls plummeted to fewer than 200 a year, and by 1988 the commission’s budget was down 22 percent and its staff had been cut almost in half.

But it was under Hal Stratton, George W. Bush’s commission chairman (and former New Mexico attorney general, as well as Lawyers for Bush cochair), that the commission turned from paper tiger to industry lapdog. Stratton cut back on investigations while taking full advantage of the perks of his office—he turned the agency into “a little travel bureau,” according to a longtime staffer. When a coalition of doctors and safety advocates asked him to look into the problem of adult-sized all-terrain vehicles marketed to kids, Stratton said he’d do a study. Three years (and more than 400 atv-related deaths of kids under 16) later, he released the results of fact-finding trips to West Virginia, New Mexico, and Alaska, where he’d met with safety advocates as well as various atv enthusiast groups. The upshot: a proposal to let kids ride even bigger, more powerful atvs.

Stratton’s departure in 2006 left the agency with a grim record—product-related deaths were up from 22,000 in 1998 to 27,000—and only two commissioners, one from each side of the aisle. Lacking a quorum, much of the commission’s work came to a halt. After waiting more than seven months to pick a new chairman, President Bush nominated a senior lobbyist for the very industry the commission regulates: Michael Baroody, of the National Association of Manufacturers. In May, Bush withdrew the nomination after it was disclosed that the association planned to give Baroody a $150,000 severance package when he took his new job. That left the cpsc‘s Republican commissioner, Nancy Nord—the former director of consumer affairs at the U.S. Chamber of Commerce—in place as acting chairman; she had earlier shown her bona fides by turning down Senate Democrats who wanted to increase the commission’s budget. “I’m not trying to fight with you,” Senator Mark Pryor (D-Ark.) exasperatedly told her during hearings this spring. “I’m trying to get you more money!”

Shortly thereafter, the Chicago Tribune reported on a Seattle toddler who had died on Thanksgiving Day, 2005, after swallowing tiny magnets that had spilled from a broken Magnetix building set. The commission had been warned about the hazard of magnetic toys years earlier and failed to act: Just six months before the toddler’s death, an Indiana preschool teacher had called to report that one of her students had nearly died when the Magnetix bits he swallowed perforated his bowels.

It wasn’t until the following year that cpsc finally recalled the Magnetix sets; its press release reassured consumers that only old sets were problematic, when in fact the hazardous sets were still being sold (and stayed on shelves for another year). This past April the commission—having now received reports of 29 Magnetix-related injuries, all but one of which had required surgery—expanded the recall to include 4 million more units. (The recall press release, negotiated with the company’s lawyers, was so vague, the cpsc had to issue a separate fact sheet later to tell parents which sets were safe to buy and which were not.) Asked by Illinois lawmakers what she planned to do about all this, Nord said her agency needed more money after all.

Nord was called back to Capitol Hill this summer during the Chinese toy recalls. “What we have here is an agency in distress,” Senator Pryor told the press. By September, even the toy industry was pleading for new government standards to help reassure jittery consumers (and, quite possibly, preempt lawsuits). “cpsc got caught with their pants down about China,” says former commissioner Ann Brown. “Companies know the agency is toothless, so there’s no reason for them to worry about the products that they bring into the country.”