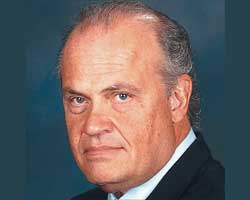 On a summer day in 1997, in a wood-paneled hearing room, Senator Fred Thompson, the chairman of the Senate governmental affairs committee, peered down from the dais at that afternoon’s witness: Haley Barbour, who until recently had headed the Republican National Committee. Thompson, a lawyer and actor elected to the Senate three years earlier, was conducting hearings probing the fundraising excesses of President Bill Clinton’s 1996 reelection campaign—especially the allegation that the president’s operation had been infiltrated by agents of Beijing. But now one of Thompson’s fellow Republicans was in the hot seat. In 1994, Barbour had arranged for a $2.1 million loan guarantee from a Hong Kong businessman to a conservative policy outfit Barbour had founded. Barbour’s group used the money to repay a $1.6 million debt to the rnc. (It later defaulted on the loan.) Press accounts suggested that the rnc used these funds to help finance its historic takeover of Congress in 1994. Given that it was illegal for foreigners to contribute to congressional and presidential campaigns, the question was, had the gop won power with laundered money from an overseas source?

Barbour claimed he had believed the money was from a U.S. subsidiary and not Hong Kong. Thompson wasn’t so sure. Referring to a meeting Barbour had had with the businessman, Thompson noted in his trademark drawl, “When you are sitting on a boat in the Hong Kong harbor talking to a gentleman who is a citizen of Taiwan, that does raise certain other potential implications in terms of appearance.” Before a roomful of reporters, he was practically calling the former chief of his own party a liar.

That implication didn’t hurt Barbour in the long run. (He was reelected governor of Mississippi last November.) But it did make Thompson quite unpopular among fellow Republicans. As many of them saw it, Thompson, who had been a staff lawyer on the Senate Watergate Committee, had one mission: to turn the Dems’ fundraising improbity into the new Watergate. He botched that task by mismanaging key aspects of the hearings; on top of that, he dared to widen the investigation to cover alleged gop wrongdoing, and even took the occasion to pitch substantive campaign-finance reform.

A decade later, though, he treats his turn as a reformer like a long-ago B-movie role best left out of his credits. Which makes him just another of the 2008 candidates who have little to say about campaign-finance reform, even as they frantically raise and spend record amounts.

Thompson did start the 1997 hearings with a gop-friendly bang—grandly referring to a Chinese government plan “to pour illegal money” into the 1996 campaign “to buy access and influence.” Over the course of 32 days of public hearings, Thompson put various Democratic fundraising shenanigans on display, from the infamous White House coffees to the Buddhist-temple fundraiser featuring Al Gore. But he never produced the goods on the purported Chinese connection, or even managed to present a coherent tale of Democratic Party corruption.

Instead, he steered the hearings toward an examination of the bipartisan ills of a pay-to-play system and went so far as to call for passage of the McCain-Feingold reform bill, which nearly every Senate Republican but he and John McCain opposed. Moreover, his committee issued subpoenas to nonprofits created by Republicans Bob Dole, Lamar Alexander, and Patrick Buchanan, and advocacy groups of the left and right: labor unions, the Sierra Club, the Christian Coalition, the National Right to Life Committee, the nra, the Heritage Foundation, and others. Senators grumbled about this buckshot approach—and the outside groups howled that Thompson was engaging in Big Brotherlike snooping.

Facing a year-end cutoff for his investigation, Thompson repeatedly asked gop Senate leaders for more time. They said no. “We were well aware that Fred Thompson was under huge pressure and criticism from Republican staff and senators,” says Don Goldberg, who worked on the Clinton White House strategy team on the hearings. “They did not want to bring up any of the non-Clinton stuff. They were furious.” The Weekly Standard quoted a “well-placed Senate Republican aide” who fulminated, “This is easily the worst congressional investigation in recent memory. [Thompson] doesn’t understand how to run a Senate hearing, and he never bothered to learn because Fred Thompson’s agenda has always been Fred Thompson. He’s trying to look bipartisan because he thinks that will win him the favorable media coverage he needs for his [possible] presidential campaign.”

Indeed, throughout the hearings, journalists speculated that Thompson was positioning himself to run in 2000 as a reformist Republican against Gore, who had been tarred by the fundraising scandals. “This was the first time he strutted his stuff,” says a senior Republican Senate aide from that time, “and it didn’t go down very well. His star began to tarnish.” Even a decade later, a bad taste lingers in gop circles. “Folks think he dropped the ball in going after Clinton,” says Grover Norquist, a conservative strategist whose actions were probed by the committee. In a private email sent last September, Focus on the Family’s James Dobson cited Thompson’s past support of campaign-finance reform as one reason to distrust him.

In the end, the 1997 hearings were a Washington equivalent of Gigli. Thompson had his moments, occasionally shining as an advocate for change—”we have no campaign-finance system in this country anymore!” he exclaimed—but he ended up tainted and scarred (if not scared) by the experience. He appears to have drawn the lesson that campaign finance is no winning issue, especially among Republicans. When a conservative activist recently wrote a column blasting his earlier reform efforts, Thompson responded by accusing rival Mitt Romney of “supporting campaign-finance reform and restrictions even more stringent than McCain-Feingold legislation.” Even McCain himself, who nearly rode his straight-talking anticorruption shtick to the gop nomination in 2000—and who still suffers among some Republican activists for having curtailed certain soft-money practices—has jettisoned his change-Washington talk.

And while the Democratic front-runners talk a lot about government misdeeds, they don’t zero in on campaign-finance rules. Hillary Clinton’s 10-point government-reform plan does not address campaign funding (though it does include restraints on no-bid contracts and modest lobbying changes). No shocker there, given that her campaign has relied on lobbyist “bundlers” who collect millions for her. Barack Obama has decried bundling and has highlighted his own efforts to curtail the influence of lobbyists, but he has not urged a comprehensive overhaul of a political finance system that has enabled him to beat fundraising records. In the first nine months of 2007, the Democratic field raised about 39 percent more than the gop contenders—another reason for some Democrats to view campaign-finance reform as not-so-pressing a priority.

Running increasingly as a populist, John Edwards has proposed full public financing for congressional races and advocated cutting the maximum contribution to a presidential campaign in half. But on the campaign trail, he has trained his fire more at lobbyists (and Clinton’s connections to them) than at campaign-finance rules; flesh-and-blood targets make better villains than a mere process.

Thompson is hardly alone in avoiding the issue. But his silence is an act of personal denial. To pursue the leading role, Thompson has written the most significant action of his Senate career—as well as the problem of political corruption—out of the script.