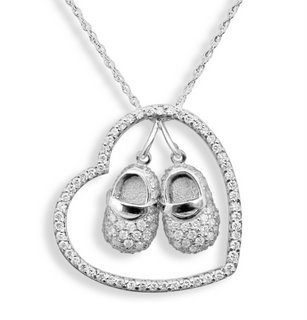 Not to begrudge any woman who’s toiled through nine months of pregnancy and multiple hours of labor, but there’s something quite sickening about this NYT story about how new mothers are expecting their husbands and partners to pony up with some really sweet bling.

This bonus goes by various names. Some call it the “baby mama gift.” Others refer to it as the “baby bauble.” But it’s most popularly known as the “push present.” That’s “push” as in, “I the mother, having been through the wringer and pushed out this blessed event, hereby claim my reward.” Or “push” as in, “I’ve delivered something special and now I’m pushing you, my husband/boyfriend, to follow suit.”

“It’s more and more an expectation of moms these days that they deserve something for bearing the burden for nine months, getting sick, ruining their body,” said Linda Murray, executive editor of BabyCenter.com. “The guilt really gets piled on.”

A recent survey of more than 30,000 respondents by BabyCenter.com found that 38 percent of new mothers received a gift from their mate in connection with their child. Among pregnant mothers, 55 percent wanted one. About 40 percent of both groups said the baby was ample reward.

You heard that right, only 2 in 5 kids can rest assure that Mom wasn’t disappointed that their arrival wasn’t accompanied by a tennis bracelet.

It is not the fact that Moms are getting a token of their hard work that bugs me, it is that you know that the diamond industry has their hands in this. Just as they invented a “tradition” of diamond wedding rings, the “three months salary” rule, and the “three-stone anniversary ring.” Hey, you can hear DeBeers’ pitchmen saying: Why not a carat for each pound of baby? Don’t you care, Dad?

I’m just saying. Because no man would ever dare.

(For a timeline of diamond marketing, follow the jump. And there’s more here.)

Diamond Timeline
For more on wedding ridiculousness (and the inflation of JLo) go here.

1939: De Beers hires N.W. Ayer and Co. to make diamonds “a psychological necessity…the larger and finer the diamond, the greater the expression of love.” Within three years, 80% of engagements are consecrated with a diamond ring.

1940: After a sociologist advises diamonds be presented as a symbol of a man’s ability to “get into the competitive race,” N.W. Ayer begins loaning gems to actresses, “who can make the grocer’s wife say, ‘I wish I had what she has.'”

1945: Department of Justice charges De Beers with “conspiring to restrict production, monopolize sales and arbitrarily influence prices” by cornering 95% of world market. De Beers executives fail to show up in court, pull company out of U.S. market, opting to use middlemen.

1947: “A Diamond Is Forever” slogan debuts. Jewelers instructed to tell men—who buy 90% of all diamonds—to spend at least two months’ salary on ring. The not-so-subtle message: Can you afford not to?

1981:Thanks to 14-year campaign to glamorize Western wedding customs, 60% of Japanese wives sport diamond rings; their husbands spend more on them than American counterparts.

1999: Advertising Age declares “A Diamond is Forever” the most effective slogan of 20th century, recognized by 90% of Americans.