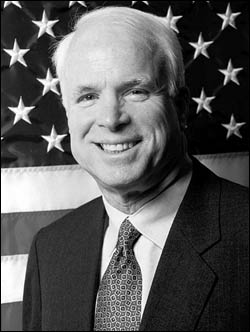 I know, I know, the thought-process that goes into one pundit’s endorsement isn’t particularly interesting. But Andrew Sullivan’s endorsement of Ron Paul in the GOP race illuminates something about the Republican field more generally.

The top-line summary of Sullivan’s politics is that he’s a small-government conservative. As such, it’s no surprise that he supports the libertarian in the race. What’s interesting, though, is that Sullivan’s second choice is McCain, a man who strongly supports a war Sullivan hates and is frequently at odds with Sullivan’s social views.

According to Sullivan the explanation is McCain’s integrity, a trait he shares with Paul. “They have both said things to GOP audiences that they knew would offend,” writes Sullivan. “They have stuck with their positions despite unpopularity. They’re not saints, but they believe what they say.” He lists McCain’s status as a war hero and his willingness to consider issues through a fundamentally serious and apolitical lens.

This is a phenomenon I’m seeing a lot when speaking to Republican voters here in Iowa. McCain is the second choice of many, many people. A number of folks I’ve spoken to say that they wish they could caucus for the man. Thompson supporters, Huckabee supporters, and Romney supporters have all said to me that they respect and like John McCain, but that their man wins for some other reason (usually, he’s right on the issues where McCain is wrong; McCain’s advocacy for a moderate immigration plan is often cited as a huge problem).

There is a thirst, I think, for honesty in politicians. When I ask supporters of any candidate here, Democrat or Republican, what they look for in a candidate, 75 percent of the time the first thing they say is “honesty,” or some variation thereof. That’s a rough number, of course, but I assure you it is stunningly high. The fact that Clinton supporters, Obama supporters, and Romney supporters—supporters of anyone at all—say that honesty is their number one priority indicates that people can convince themselves that basically anyone is “honest.” But somehow, deep down, they realize that John McCain is the real deal.

Sullivan and Iowa’s Republicans aren’t the only ones. I’m prey to this as well.