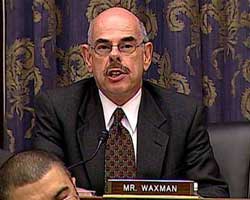 Since last Spring, the White House has repeatedly told the press and Congress about a potential problem involving millions of missing emails. But last Thursday the story changed: An administration spokesman told reporters “we have no way of showing that any emails at all are missing.”

(You can find all of our past coverage of this issue in our missing White House emails index.)

Rep. Henry Waxman, the Oversight Committee chairman, was understandably concerned by the sudden change in the administration’s story. They had originally told him that there were 473 days for which no email was archived; now they were saying they weren’t sure if any were missing at all. So Waxman and the Oversight Committee scheduled a hearing on February 15 to clear up all the confusion. He quickly fired off letters to White House counsel Fred Fielding (PDF) and Allen Weinstein, the National Archivist (PDF), requesting their testimony. Also invited to testify is Alan Swendiman, the Director of the Office of Administration.

The weeks leading up to the hearing were supposed to be quiet. But the missing emails story has a way of not staying put, and the days since Waxman’s announcement have been no exception. The committee’s letter to Fielding included the first publicly available list of days for which no emails were archived by various departments. That list can be traced back to the White House itself—the dates were reproduced from notes Oversight Committee staffers took when they were briefed by the administration about the problem last September.

After Waxman released the dates of the missing emails, bloggers moved quickly to check them against news events. If the distribution of days for which the administration was missing emails appeared random, then the White House had probably just experienced a technical glitch due to incompetence. But a less-than-random set of days would point to more sinister explanations, including potentially criminal destruction of records. Citizens for Responsibility and Ethics in Washington (CREW), which is suing the White House to ensure the preservation of the missing emails, issued lists of prominent news events on the days that no emails were archived so that journalists and the public could better judge what was actually going on.

Bloggers moved fast to analyze the new data. On Monday, the liberal blog firedoglake published an detailed analysis indicating that “almost all the periods for which OVP or WH were missing emails… were periods during which they were responding to document requests or subpoenas.” The apparent connections could just be a coincidence; after all, correlation does not imply causality. But CREW and firedoglake’s analyses certainly appear to point to a non-random cause for the emails’ disappearance.

While it’s likely that none of this will really come to a head before Waxman’s hearing on the 15th, the most recent developments may have an impact off the Hill. Last year, CREW teamed up with the National Security Archive (NSA), another nonprofit, and sued the government to ensure the preservation of whatever missing emails could be saved. The latest changes in the administration’s story may influence how the court rules. The White House responded to a court order last week by answering some of the questions the plaintiffs had been asking about the emails. In its filing, the White House admitted, among other things, that it had recycled backup tapes from the first nine months of 2003, when the Valerie Plame leak occurred and the country went to war with Iraq. Having no backup tapes will make recovering any emails from that part of 2003 even harder, and the nature of computers means that every day that goes by will make deleted emails still lingering as “ghosts” on individual hard drives harder to find.

If the plaintiffs can convince the court that the administration’s filing in response to the court order was incomplete, they might be able to get more information before Waxman’s hearing. Anne Weismann, CREW’s chief counsel, told me earlier this week that she’s hoping the flip-flopping will “make the court recognize it’s just not getting the full story from the White House.”