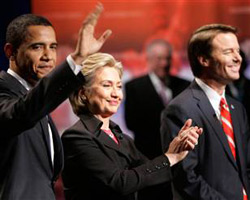 What did the umpteenth Democratic presidential debate, held in Nevada on Tuesday night, demonstrate? That Barack Obama, John Edwards, and Hillary Clinton each need a nap. The trio looked worn out. Perhaps that was why few punches were thrown. The Iraq war, the politics of race, tears (or near tears)–the Democratic contest had become rather heated in recent days. Clinton, using misleading information, had accused Obama of being a disingenuous hypocrite regarding the war. Obama’s camp had seized on a comment Clinton had made to Fox News and assailed her for supposedly dissing Martin Luther King Jr. And Edwards had snidely insinuated Clinton might not be strong enough to be president (after she became emotional at a campaign stop in New Hampshire). It was getting nasty.

But in Las Vegas, there was relative calm. And no one hit the jackpot.

Sure, there were a few pokes. Clinton declined to state that Obama and Edwards are prepared to be president. Edwards noted that Clinton and Obama had pocketed campaign contributions from corporate executives. Obama suggested that Clinton was using the specter of a future terrorist attack to scare people into voting for her. Overall, though, the three stuck to their positive scripts. Obama: I can inspire, mobilize, and bring together a divided nation. Clinton: I have the experience to be ready on Day One to solve problems for you and your children. Edwards: I will fight to my last breath for middle-class and low-income Americans. (Clinton did have a Clintonian moment when she acknowledged that she had voted for the anti-consumer bankruptcy bill of 2001 but “was happy that it never became law.” In other words, I voted for it but didn’t inhale.)

The major clash of the night came over…energy policy. With the debate being held in Nevada, there was the obligatory question about Yucca Mountain, the proposed disposal site for nuclear waste that Nevadans tend to despise. All three Democrats voiced their opposition to continuing the project. Clinton, though, pointed out that Edwards had twice voted in favor of Yucca Mountain when he was in the Senate. He explained his shift by claiming new scientific information had emerged since his votes. Edwards then countered that of the three he was the only one who was flat-out opposed to constructing any more nuclear power plants. Edwards noted that Clinton was “agnostic” on the issue and that Obama had said he might support additional nuclear power plants. Obama replied that he would not rule out developing more nuclear energy facilities if the waste issue could be resolved.

During this portion of the debate, Clinton took the opportunity to criticize Obama for having voted for the “Dick Cheney/lobbyist” energy bill of 2005, which included big tax breaks for oil and gas companies. Edwards turned to Clinton and reminded her that she had raised more money than any candidate from the oil and gas industries. He added that he was the only candidate who favored a moratorium on the production of new coal-fired power plants, unless they incorporate technology that captures greenhouse gas emissions. Obama ended this tussle on energy policy by saying that “ordinary citizens have to make a change” and consume less energy by using more efficient lighting and appliances: “There’s no reason why, with the kind of presidential leadership that I intend to provide, that we can’t make drastic cuts in the amount of energy that we consume without any drop in our standard of living.” Whew. It was enough to make a policy wonk’s head spin. But Edwards clearly seemed the no-nukes candidate and the greenest of the three.

That was it for the fireworks. The candidates went on to agree about immigration reform and the need for early childhood education.

It’s unlikely that the two-hour-long debate will have much impact on the Nevada Democratic caucus this Saturday–a contest that will probably be more affected by the campaign’s organizational muscle. The debate showed yet again that on policy matters, despite all the recent passion, there are more similarities than differences among the three. For Democratic voters, the choice is fundamentally one of style and character. Given that the three are generally advocating the same progressive proposals and notions, that’s not such a bad deal for Democrats.